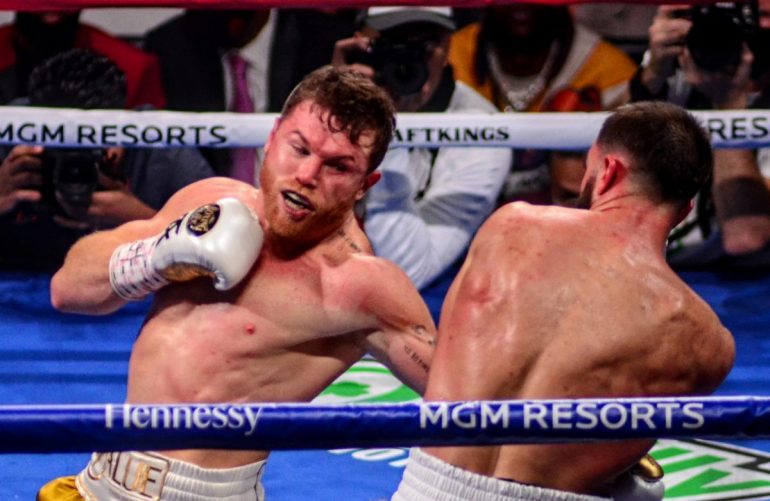 LAS VEGAS – Since the IBF created the super middleweight division in 1984, with the other organizations eventually following suit a few years later, it has been a home for many great fighters, including Sugar Ray Leonard, Thomas Hearns, Roy Jones Jr., James Toney, Joe Calzaghe, Nigel Benn, Chris Eubank, Andre Ward,  Carl Froch, Mikkel Kessler and others.

All of them won world titles. Some even unified belts but none could ever claim the mantle of being the undisputed champion by fully unifying the division, be it in the three- or four-belt era.

However Canelo Alvarez, already boxing’s pound-for-pound king and biggest star, did it in resounding fashion on Saturday night and now stands alone in 168-pound division history.

The Ring champion Alvarez turned in a masterful performance before scoring a sensational 11th-round knockout of Caleb Plant to also retain his WBA, WBC and WBO titles while violently taking Plant’s IBF belt to become the first undisputed super middleweight world champion before a sold-out and overwhelmingly pro-Alvarez crowd of 16,586 at the MGM Grand Garden Arena.

CANELO ÁLVAREZ TKO’S CALEB PLANT IN THE 11TH ROUND!

“It hasn’t been easy to get to this point, but with your support, my family and my team we’ve gotten really far,” Alvarez told the crowd. “This is for everybody, especially for Mexico. This is another one for our team. We did it tonight.”

Plant, who got knocked down twice, was taken to Universal Medical Center as a precaution.

The crowd cheered and chanted for Alvarez throughout the fight and he delivered big time. 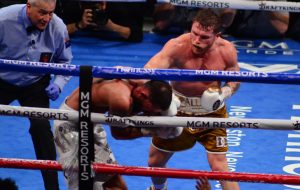 Canelo puts the finishing “touches” on the KO that made him the first undisputed super middleweight champion. Photo by German Villasenor

“This means so much for the history of Mexico to become an undisputed champion,” Alvarez said. “There are only six undisputed champions in history (in the four-belt era). It keeps me happy and very motivated to be one of the six.”

The historic victory was the culmination of Alvarez’s goal of becoming the undisputed champion that began last December and led to him having four fights in 11 months, a level of activity unheard of for an elite fighter in this era.

The trek began when he easily outpointed Callum Smith to take his Ring championship and WBA belt as well as the vacant WBC title. After a WBC mandatory defense against Avni Yildirim, whom he crushed in three rounds in February, Alvarez battered Billy Joe Saunders into an eighth-round knockout to take his WBO title in May. It set the stage for him to go after Plant.

As a broadcast and promotional free agent, just how he wanted it, Alvarez was able to make a one-fight deal with Al Haymon of Premier Boxing Champions for the Showtime Pay-Per-View fight that could fulfill his goal with a victory and his fill his bank account with a guarantee of $40 million to Plan’s career-high guarantee of $10 million.

With the crowd chanting “Canelo! Canelo!” from the opening bell, Plant started by trying to jab with Alvarez, looking to feel him out in a get-to-know-you round. 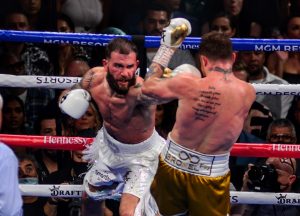 Plant had early rounds success with his snappy jab. Photo by German Villasenor

Plant’s success quickly faded. Alvarez turned things up in the second round, backing Plant up and firing power shots with him along the ropes. Alvarez began to get his left hook going in the third round. He landed to the head and body, which he did regularly for the rest of the fight.

Plant, who was making his fourth title defense, could never get a lot going and even when he landed, Alvarez, with an all-time great chin, never flinched.

Things turned a bit chippy in the fifth round when referee Russell Mora warned Alvarez for a low blow and Plant for pulling Alvarez’s head down. But then Alvarez had a big sixth round, nailing Plant early with a right-left combination and moments later with an overhand right. Plant seemed hurt and Alvarez marched to him with his hands down, seemingly with disdain.

An accidental headbutt briefly rattled both fighters in the seventh round but Alvarez continued to plow ahead and connect with power shots. He was well in control in the 10th round when he caught Plant with a series of uppercuts and forced him to hold on.

Alvarez, who was making his third title defense, came out strong in the 11th and looked like he was hunting for the knockout. He charged at Plant and eventually landed a hook and a right hand that knocked him down. It was the first knockdown of Plant’s career.

Plant (21-1, 12 KOs), 29, an Ashland City, Tennessee, native fighting out of Las Vegas, showed enormous heart to survive the knockdown but he was in bad shape and Alvarez was all over him.

Alvarez (57-1-2, 39 KOs), 31, of Mexico, who has won world titles in four divisions from junior middleweight to light heavyweight, pummeled him with power shots along the ropes. He landed two massive uppercuts and eventually drove Plant to the mat. Plant was on his back and not moving as Mora waved off the fight without a count at 1 minute, 5 seconds as the crowd erupted in cheers.

“He was making the fight pretty difficult, but [trainer] Eddy [Reynoso] told me to just stick to the game plan in the last two rounds,” Alvarez said. “In the end, I got him. That’s the way it had to finish. He was already hurt and I went for the kill.”

Alvarez was ahead on all three scorecards at the time of the knockout. Judge Steve Weisfeld had him ahead 98-92, Dave Moretti 97-93 and Patricia Morse Jarman 96-94. The Ring had Alvarez up 98-92.

Whatever bad blood existed before the fight because of Plant’s needling of Alvarez about a past failed drug test and their physical altercation during the face-off at their kickoff news conference on September 21 seemed to melt away as they embraced and spoke to each other.

“Caleb is a good fighter. I have a lot of respect for Caleb Plant,” Alvarez said. “He was a difficult opponent with a lot of ability and I do respect him. We are both men at the end of the day. He wanted to fight me and still continue. I told him there’s no shame. We had a great fight tonight.”

Alvarez will have many options for whatever he wants to do next. He is again a promotional and broadcast free agent. He could stay with PBC and seek fights with former two-time super middleweight titlist David Benavidez or WBC middleweight titlist Jermall Charlo, who would love nothing more than to move up for the opportunity. He could do another deal with Matchroom Boxing promoter Eddie Hearn and move up to light heavyweight for the second time and challenge WBA light heavyweight titlist Dmitry Bivol. Or he could look to Top Rank if he is interested in challenging IBF/WBC light heavyweight beltholder Artur Beterbiev or WBO titlist Joe Smith Jr.

He has good relationships with each of those groups but he did not commit to any specific plan, offering only, “We’ll see.”

However during his in-ring victory celebration, one thing was clear: A gold crown was placed on his head, symbolic of his position as the king of the super middleweight division and all of boxing.