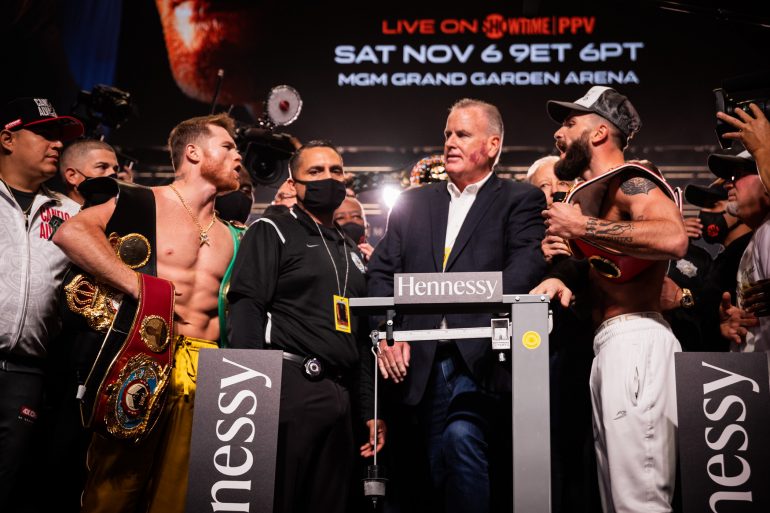 Canelo Alvarez and Caleb Plant continued their war of words after making weight for their showdown for the undisputed super middleweight championship. Photo by Amanda Westcott/SHOWTIME
05
Nov
by Dan Rafael

LAS VEGAS – Fans were permitted into a weigh-in Nevada for the first time since the start of the coronavirus pandemic and they turned out in force to see Canelo Alvarez and Caleb Plant both make weight on Friday ahead of their historic showdown.
About 4,200 filled the seats made available for the weigh-in inside the MGM Grand Garden Arena, where heavy crowd favorite Alvarez and Plant will meet on Saturday (Showtime PPV, 9 p.m. ET, $79.95) to unify the titles and produce the first undisputed super middleweight champion in division history, be it in the three- or four-belt era. 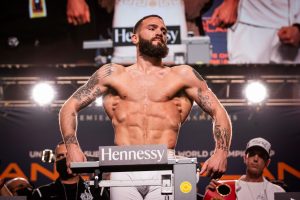 Caleb Plant weighed in at 167 pounds. Photo by Amanda Westcott/SHOWTIME

With the vast majority of the crowd booing him, Plant, the IBF titleholder making his fourth defense, hit the scale first and was a ripped 167 pounds, one under the division limit.

Ring champion Alvarez, who also holds the WBC, WBO and WBA belts, was 168 pounds and also looked in tremendous shape as the crowd cheered for wildly for him.

At their Sept. 21 kickoff news conference in Beverly Hills, California, Alvarez and Plant got into a physical altercation during the face-off that left Plant with a bloody cut under his right eye; he still sports scaring on his face from it. Because of the incident fight organizers Premier Boxing Champions, TGB Promotions and Showtime elected to dispense with a face at Thursday’s final pre-fight news conference as well after they made weight.

Instead, they were placed several feet from each other on stage with the scale and TGB Promotions president Tom Brown between them. Still, they stared each other down and had an extended bit of jawing back and forth as the crowd roared.
When they were done, Plant walked away and wagged his finger at the booing crowd.

“Saturday night you got your first undisputed (super middleweight) champ and his name is Caleb Plant,” he told Showtime’s Jim Gray.

Asked what he and Alvarez were saying to each other, Plant said, “We agree to disagree. We gonna find (who’s right) out Saturday night though, I promise you that.” 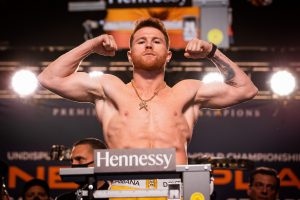 Canelo tipped the scale at the division limit of 168 pounds. Photo by Amanda Westcott/SHOWTIME

Alvarez’s version of the back-and-forth was, “I just say you will see tomorrow. It’s time. I don’t need to say anything. It’s time. So, he will feel something different, believe me.”

Plant (21-0, 12 KOs), 29, an Ashland City, Tennessee, native fighting out of Las Vegas, who will make a career pay-day of at least $10 million, added he loves being the underdog and that he was not at all nervous for what is by far and away his biggest fight.

“Absolutely, I love it,” he said of being underestimated. “You can cheer for him all you want, you can boo for me all you want. Hey, remember – it’s easy to sit in those seats; it ain’t easy to stand up here. Remember that. Come on man (I’m not nervous). This is what I do. I was born for this. This is my destiny.”

Alvarez (56-1-2, 38 KOs), 31, of Mexico, flanked my legendary former undisputed heavyweight champion Mike Tyson – who picked him to win – was cool and poised as always.

“I feel blessed. I am motivated by all my fans here, my family, my team,” said Alvarez, who is guaranteed $40 million. ”I feel motivated.”