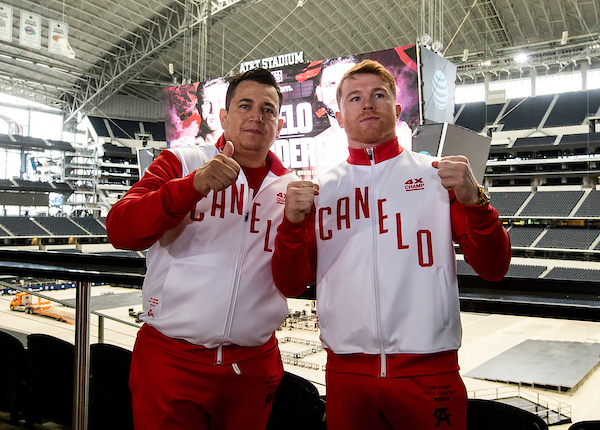 LAS VEGAS – As far as Canelo Alvarez and manager/trainer Eddy Reynoso are concerned their dealings with Premier Boxing Champions chief Al Haymon have been first class and they hope to work with him on a series of fights beyond just the one Alvarez has on Saturday at the MGM Grand Garden Arena.

That is where Ring super middleweight champion Alvarez, who also holds the WBC, WBO and WBA titles, will meet IBF beltholder and PBC fighter Caleb Plant in the Showtime PPV main event to crown the first undisputed 168-pound world champion in division history, be it the three- or four-belt era.

“We have had no problems working with Al Haymon. He is very kind to us, he works well with us and he has respected us and we hope to continue to work with him on things in the future. I’ve worked with him on other various fights before and he’s always been great to us and to our team.”

PBC spokesman Tim Smith agreed that the partnership with Alvarez and Reynoso for Saturday’s fight has been a good experience. 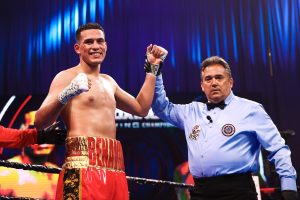 Could David Benavidez be next for Canelo should the Mexican star beat Caleb Plant? It’s possible thanks to Canelo’s free agency and good relationship with the PBC.

Reynoso specifically mentioned two PBC fighters that Alvarez is interested in facing, assuming all goes well against decided underdog Plant (21-0, 12 KOs): two-time super middleweight titlist David Benavidez (24-0, 21 KOs), who is scheduled to face Kyrone Davis on November 13 in a Showtime-televised main event, and WBC middleweight titleholder Jermall Charlo (32-0, 22 KOs), who has said he would be happy to move up in weight for the opportunity to fight Alvarez.

But Alvarez and Reynoso are also not closing the door to working once again with Matchroom Boxing’s Eddie Hearn, who is in Las Vegas to attend the fight in support of Alvarez, or even doing business with Bob Arum of Top Rank. It’s just the sort of enviable position that the pound-for-pound king wanted to be in when he became a promotional and broadcast free agent in late 2020.

After Alvarez’s deal with HBO expired in late 2018, coinciding with HBO’s exit from the boxing business, he went to upstart streaming service DAZN for a then-athlete record contract: five years, 11 fights and $365 million.

He fought three bouts under that deal, against Rocky Fielding, Daniel Jacobs and Sergey Kovalev, but eventually had a bad falling out with longtime promoter Golden Boy, which had brought its entire stable to DAZN in addition to Canelo. Alvarez sued Golden Boy and DAZN over various issues and they eventually settled the lawsuit, which included Alvarez becoming a promotional and broadcast free agent.

It was a key move for Alvarez, who relished the ability to sign short-term deals and seek the best promotional and broadcast situations possible. 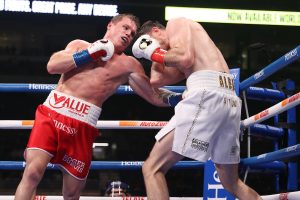 Canelo’s near shutout of Callum Smith (promoted by Matchroom Boxing and streamed live on DAZN) was his first bout as free a agent. Photo by Ed Mulholland/Matchroom.

Although Alvarez was not tied to DAZN after the lawsuit settlement, he agreed to a one-fight deal with Matchroom Boxing and DAZN to challenge Callum Smith for the Englishman’s Ring/WBA super middleweight title as well as the vacant WBC belt last December. Alvarez, 31, cruised to a one-sided decision.

Then Mexico’s Alvarez (56-1-2, 38 KOs), Hearn and DAZN agreed to a two-fight deal. It kicked off with Alvarez crushing WBC mandatory challenger Avni Yildirim in the third round on February 27. Then Alvarez met WBO titlist Billy Joe Saunders in a unification fight and forced him to retire on his stool with a broken orbital bone after the eighth round on May 8.

With only Plant (21-0, 12 KOs ) and his IBF belt standing in the way of Alvarez accomplishing his goal of becoming the undisputed super middleweight champion, he used his free agency just how he had envisioned and made a one-fight deal with Haymon for Saturday’s bout, barring a loss that would trigger Alvarez’s contractual right to an immediate rematch. The fight also marks Alvarez’s return to Showtime for the first time since doing five fights in a row with the network from 2012 to 2013.

“More good fights are coming,” Reynoso said. “We have Benavidez, we got Charlo. There’s fighters with Matchroom that can be of interest. There’s a lot of good things coming. 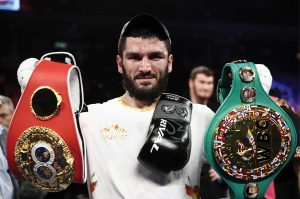 Canelo says he’s willing to face Artur Beterviev. A deal would need to be made with Top Rank, but Alvarez and Eddy Reynoso are fine with that. Photo by Valery Sharifulin/TASS via Getty Images

“It’s really important, and I want to emphasize this – when you administer things correctly with all of those resources we can do big things to make the best fights with the promoters who have the best fighters. We are doing this fight with PBC, Bob Arum is lending us his gym (this week) and we appreciate that, and Eddie Hearn is supporting us in this fight.”

Reynoso said he is willing to work with any of them. He noted that Hearn could offer Alvarez a fight with WBA light heavyweight titlist Dmitry Bivol (18-0, 11 KOs) and that Arum could offer him a fight with WBC/IBF 175-pound champion Artur Beterbiev (16-0, 16 KOs), two fights Reynoso said their side is interested in.

“We want to do the best fights,” Reynoso said. “For example, this fight we’re fighting for all the super middleweight titles. We have the doors wide open for us and we want to do the best fights we can that are available. A fight with Charlo, Benavidez, Bivol, Beterbiev. There’s a lot of good fights at 168. There’s fights there (at light heavyweight) too. It’s not a problem.”