Canelo and Plant keep it professional at final press conference 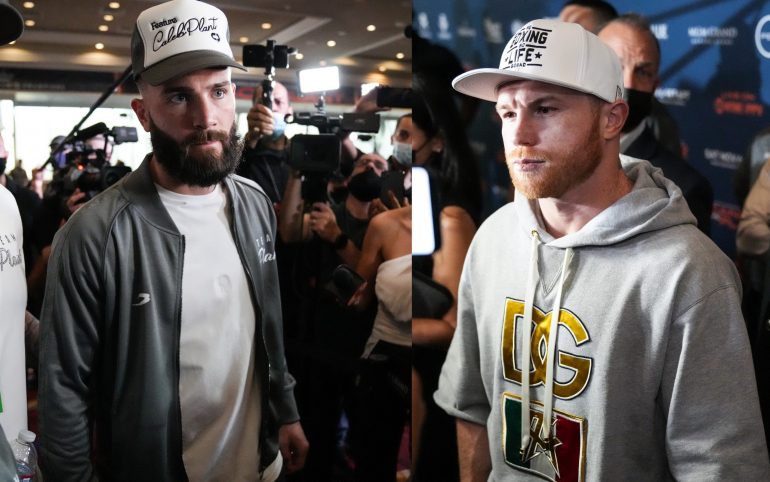 LAS VEGAS – The first time Canelo Alvarez and Caleb Plant were at a press conference together was on Sept. 21 in Beverly Hills, California, to announce they would meet for the undisputed super middleweight championship. Things quickly got out of hand.

They took the stage for a face off before the formal news conference began and after going nose to nose and engaging in animated trash talk, they wound up pushing and shoving each other and throwing punches. Canelo landed and Plant suffered a bloody cut under his right eye that fortunately was not serious enough to force their showdown to be delayed.

So, as scheduled, they will meet for Alvarez’s Ring super middleweight championship and to unify the four major sanctioning body belts in the first ever undisputed 168-pound title fight on Saturday (Showtime PPV, 9 p.m. ET, $79.99) at the MGM Grand Garden Arena.

The second meeting between Alvarez and Plant at a news conference came on Wednesday and was far more subdued than the first one.

There was no shouting, no nonsense and, just to make sure there was not another chance for them to get physical with each before they get into the ring, organizers dispensed with the face off.

Alvarez, who holds the WBA, WBC and WBO belts, and IBF titlist Plant never got closer than several feet from each other, but they still had their say when it was their turn to speak.

“There’s not much time left and not much left to say, so I’m gonna keep it short and sweet,” Plant said before looking over at Alvarez. “Leading up to this fight, Canelo said that Mexicans don’t f— around. Well, that’s good to know because where I’m from, we don’t f— around neither. So, Saturday night, make sure you tune in. You’ll be seeing the first undisputed super middleweight (champion) of all time. This is history and you’re looking at him, and his name is Caleb Plant.” 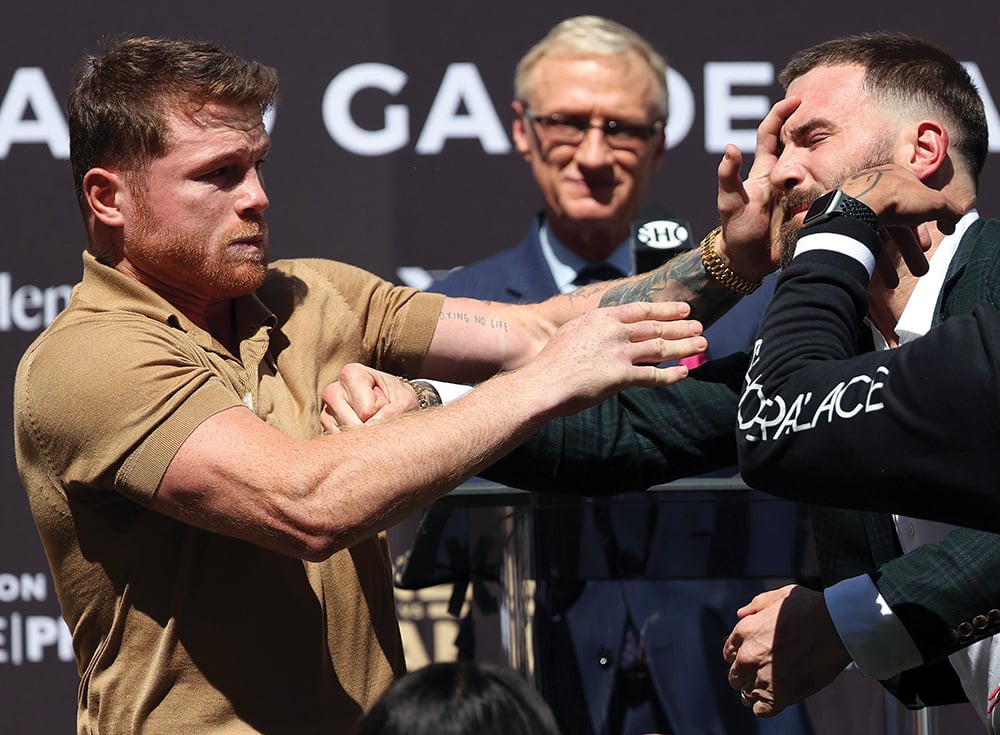 Mexico’s Alvarez (56-1-2, 38 KOs), 31, was also reserved. He blew kisses to his toddler daughter in the audience and sounded confident as usual.

“We have come a long way in our career to make this happen,” Alvarez said. “Now we’re just days away from making history.”

Alvarez and Plant said it was not their decision to call off the traditional face off. That call was made by Premier Boxing Champions, TGB Promotions and Showtime.

Perhaps those who made the decision saw what everyone else could plainly see – that Plant still sports a very obvious red scar under his right eye from the incident at the kick-off news conference that was nearly six weeks ago.

Las Vegas resident Plant downplayed what looks to be an area of awfully fragile skin under the eye.

“It’s just a scratch. I sparred the next day. No stitches or anything like that, so it hasn’t disrupted sparring or training in any way,” Plant said. “So, like I said, my sunglass just pushed my skin up a little bit. Put a Band-Aid over it.”

Was Plant worried when the cut initially opened that it might force the fight to be delayed or even canceled?

“I think so, naturally, but shortly after when we looked at it we knew it was nothing,” Plant said. “But I went to the doctor to get it checked anyway with everything that’s on the line. He said it was nothing as well.”

Asked if he had noticed the mark on Plant’s face that he put there, Alvarez smiled.

“It’s just a scar right? You never know,” he said.

Both fighters downplayed the kick-off news conference incident and said it didn’t mean much at this point.

“It wasn’t my intention to get under Canelo’s skin at the first press conference,” Plant said. “I think the media makes more of it than we do. We’ve both been in worse scuffles than that. When the bell rings, it’s completely different.”

Said Alvarez: “It’s so different when you’re in the ring, so I don’t really take anything from our altercation at the first press conference.”