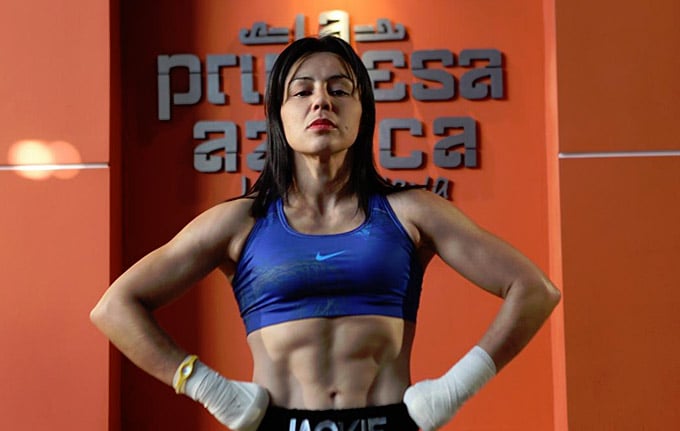 Jackie Nava has not lost a fight since 2011.
31
Oct
by Diego Morilla

In a country that produced countless boxing legends who never feared putting it all on the line to face each other in the ultimate battle for bragging rights, this fight will fit right into those illustrious history pages.

In a memorable non-title bout (with only a symbolic belt produced by the WBC to raise awareness on breast cancer as the only trophy), Jackie Nava displayed boxing skills and athleticism worthy of a woman half her age as she steamrolled past Mariana Juarez, women’s boxing’s winningest fighter ever, by unanimous decision in Tijuana, Mexico.

After a brawling match had developed for the first couple of rounds, Nava (39-4-4, 16 KOs) took control of the bout with her impeccable accuracy and speed, taking the fight right to a befuddled Juarez that was clearly not prepared for the quality and quantity of Nava’s attack.

After a couple of rounds, it was clear that Nava, who may just be the best athlete in women’s boxing today with a year-round physical training that includes running half-marathons in her spare time, was being successful in forcing Juarez to stay mobile and frustrated during the rest of the bout. “La Barbie” Juarez was in fact so engulfed in the relentless leather storm being dished out by “The Aztec Princess” that she circled the ring moving continuously towards the left, opening herself up to Nava’s fast straight rights.

A clash of heads produced some swelling on Juarez’s left eye, and for a moment the fight seemed to be in peril of being stopped, but it was allowed to continue and it was all Nava in the final stretch, while Juarez (55-11-4, 19 KOs) kept smiling as she moved forward with no game plan other than trading leather and hoping for a miracle.

The scorecards favored Nava by 100-90, 99-91 and 97-93. Nava has occupied the No. 1 position at The Ring’s women’s ratings in the junior featherweight division almost since the creation of the rankings. Juarez occupies the No. 5 position. Both women are 41 years old and have earned multiple titles in their respective decades-long careers.