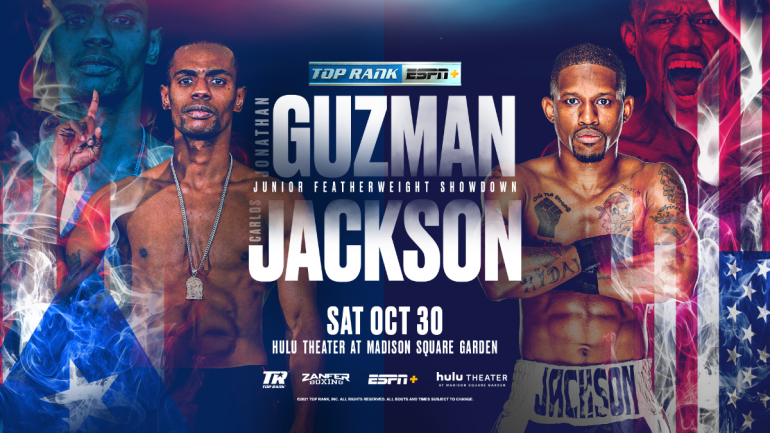 For Carlos Jackson, that is the day his perception of the former junior featherweight titlist changed for good.

“I’m not worried, man,” the 32-year-old told The Ring. “When he lost [a unanimous decision to Yukinori Oguni in December 2016], I could tell that he was not taking boxing seriously.”

On Saturday, Guzman and Jackson meet in a scheduled eight-round junior featherweight affair from Madison Square Garden’s Hulu Theater in New York. The bout will take place on the undercard of the 10-round junior welterweight main event featuring title contender Jose Zepeda taking on Josue Vargas.

Guzman (24-1, 23 KOs), who hails from the Dominican Republic, has fought just twice since suffering the lone defeat of his pro career. He outpointed journeyman Roberto Castaneda over 10 rounds in a November 2019 bout in Oklahoma City. He followed up with a third-round knockout of another journeyman, Rodolfo Montoya, who floored Guzman in round two before hitting the deck himself in a slated six-round contest.

Jackson (17-1, 11 KOs), 32, of Atlanta, who is coming off an eight-round split decision victory over Weusi Johnson in February on the heels of his first loss in the bout prior, claims there is a significant difference in the way both men handled their first loss.

“I knew what I did wrong and I wanted to get back in the ring as soon as possible to show everyone that I was capable of being a better fighter,” he continued. “Guzman doesn’t have the hunger that I have right now.”

When asked if he felt that his opponent was mentally weak, Jackson refused to go that route.

“I wouldn’t say that. I think his goal was to become a champion and he accomplished that task,” he explained. “He made it, and now he’s popular in his hometown. People [in the Dominican Republic] want to be around him. And now he doesn’t have the hunger to fight anymore.

“Unfortunately for him, he’s facing a hungry dog on Saturday, and I’m going to do whatever it takes to get the win. I believe he is using our fight to get back into the game, but I’m just gonna chuck him right back out in front of the world.”