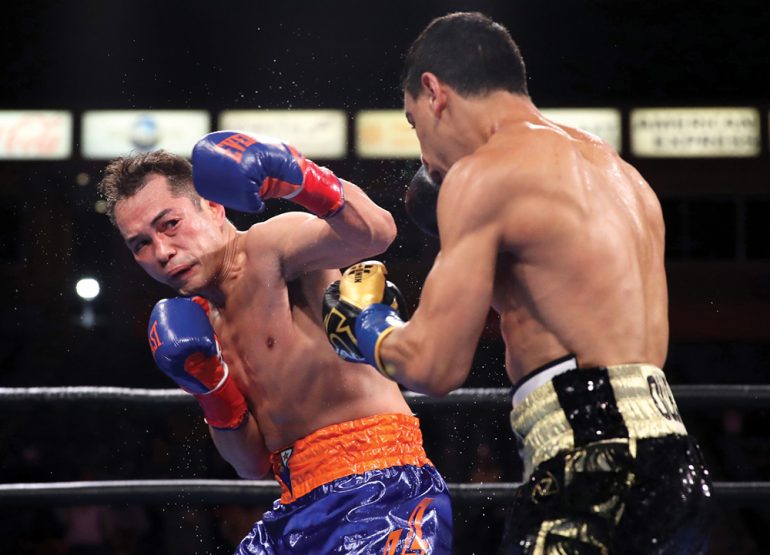 CARSON, CALIFORNIA - MAY 29: Nonito Donaire (L) punches Nordine Oubaali in the fourth round during their WBC World Bantamweight Championship bout at Dignity Health Sports Park on May 29, 2021 in Carson, California. (Photo by Katelyn Mulcahy/Getty Images)
28
Oct
by Ryan Songalia

Nonito Donaire will make the first defense of his WBC bantamweight title against fellow Filipino boxer Reymart Gaballo on Dec. 11 at the Dignity Health Sports Park in Carson, California.

The fight will headline a Showtime Championship Boxing triple header, as was first reported by Keith Idec.

Donaire (41-6, 27 knockouts) is coming off a crushing knockout of the previously unbeaten Nordine Oubaali in May to lift the title, while Gaballo (24-0, 20 KOs) was less convincing in winning the interim title by split decision against Emmanuel Rodriguez last December.

Gaballo, who is co-promoted by Sanman Promotions and MP Promotions, hails from General Santos City, Philippines, the same hometown as Donaire’s father Nonito Sr. Gaballo, 25, is much younger than Donaire, who turns 39 next month, but has not nearly fought nearly as difficult competition as the future Hall of Famer Donaire.

“This is gonna be big for Reymart and I am very confident he will beat Donaire,” says Jim Claude Manangquil, CEO of Sanman Promotions. “It’s his time now.”

Donaire, who was born in Bohol province in the Philippines, had previously agreed to fight another Filipino with a belt, WBO bantamweight titleholder John Riel Casimero, before that bout fell apart due to disagreements over pre-fight drug testing and other personal slights. The two have returned to speaking terms since then, after Donaire’s promoter, Probellum, won the purse bid for Casimero’s next title defense, slated against mandatory challenger Paul Butler of the United Kingdom.

Probellum, which is headed by Richard Schaefer, also promotes Butler. That bout is also expected to take place on Dec. 11, either in the United Kingdom or Dubai.

Schaefer tells The Ring that, should Donaire beat Gaballo, he is open to unifying against the winner of the Casimero-Butler fight, or pursuing a rematch with Naoya Inoue, who defeated Donaire in a thrilling first bout in 2019, or even moving down to junior bantamweight to win a world title in a fifth different weight class.

“Who knows who’s going to win that fight [Casimero-Butler], but the fact is that Nonito Donaire would fight either one,” said Schaefer.

“We could also ask the WBC special permission to move down and fight at 115 against whoever will be the WBC champion at that time. This is something that would actually be historic because that’s the one weight where Nonito hasn’t won a belt so he would be very motivated for that as well. He can make 115, he told me.”