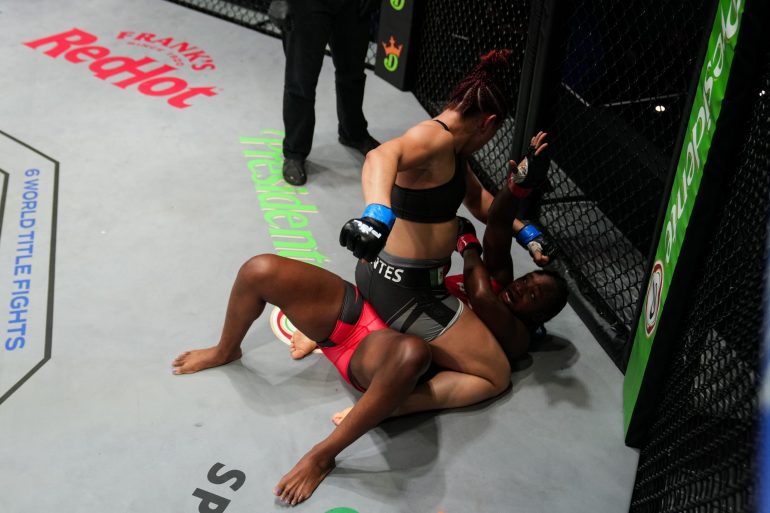 Claressa Shields suffered her first defeat as a professional fighter – and just second ever in any combat sport – by split decision to Abigail Montes on Wednesday at a Professional Fighters League event at the Seminole Hard Rock Hotel and Casino in Hollywood, Fla.

One judge scored the three round mixed martial arts bout in favor of Shields, 29-28, while the other two scored it 29-28 in favor of Montes, a 21-year-old from Guadalajara, Mexico.

Shields has been dominant in boxing, winning Olympic gold medals in 2012 and 2016, and pro titles from 154 to 168 pounds, but the 26-year-old from Flint, Mich. was stepping into the MMA cage for just the second time, having stopped Brittney Elkin in her debut in June.

The fight took on a familiar pattern for boxers turning to MMA: Shields was in control when the action was on their feet, while Montes was dominant once she could take Shields to the ground. Shields had her way for most of the opening stanza, but was out of her element in the second and third rounds, when Montes was able to take Shields down or push her against the cage.

Shields was gracious in defeat, congratulating Montes, who moved her record to 3-0.

Shields’ only other defeat came in 2012, when she lost to England’s Savannah Marshall at the 2012 World Boxing Championships. Coincidentally, Shields will be back in the boxing ring on Dec. 11, defending her unified middleweight titles against Ema Kozin on a card that will also feature Marshall.