Ten days away, we hear from Canelo Alvarez and from Caleb Plant 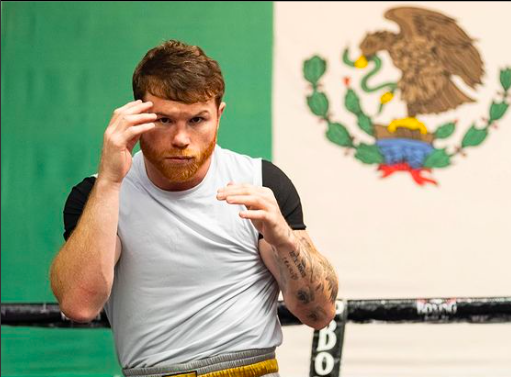 Canelo Alvarez and trainer Eddy Reynoso took part in a Zoom call with media to chat about the forthcoming challenge for the red-head pugilism pack leader, Caleb Plant on Nov. 6 at the MGM Grand in Vegas, with the winner being able to boast that they hold all the belts at 168.

No surprise, Canelo came off as unflappable, supremely confident, but without an air of cockiness.

Brian Custer presided over the Zoom call, and as per usual, Canelo seemed in a zone mixing serenity and intensity.

He showed a sense of humor when asked about what attributes Plant (21-0 with 12 KOs), from Tennessee, will bring to the table in Las Vegas, and on Showtime pay-per-view. What about his chin? “I hope he has a good chin, because he’s gonna need it,” Canelo said, in English.

The Mexican battler’s trainer, Eddy Reynoso, sat next to the hitter, and offered his take on what Team Canelo sees as strong traits in Plants’ arsenal.

And he said naw, Plant is not comparable to Floyd Mayweather, for one thing he’s bigger and stronger. Plant is maybe something like an Erislandy Lara, he said, but overall, he’s thinking that Plant won’t be that hard a mountain to climb. “Caleb has good boxing skills,” the 56-1-2 fighter stated. “He has good movement and a good jab. But it’s nothing new for me. I know what I need to do. I need to be patient in the early rounds and then start doing my job.” 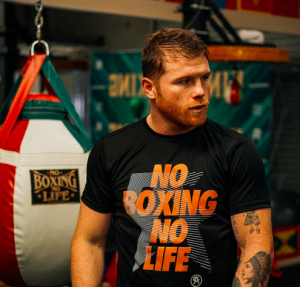 And what is Plant bringing to the table? “Plant has three main attributes: power in his left hand, his movement and his defense,” the tutor said.

“We’re going to come in and fight our own style. We have to use the style we know how to win with.”

And what will Canelo have for the watchers when he climbs into the ring?

“They know, they know what I’m gonna do in the ring,” Canelo said, “and more with this fight, when something is…Gonna be a really good night for us!”

Right after the Zoom, Showtime offered a stream with Plant, and the underdog spoke to host Ray Flores about how he’s feeling. No hint of surprise, he reported that the camp has been stellar. Plant didn’t try and present it like he’s going to come in and steamroll Canelo. He said a couple times that he isn’t motivated by getting media attention. “One thousand years from now when they speak about boxing, I want them to bring my name up,” he said.

Strength and conditioning coach Larry Wade spoke to Flores, and interestingly, he didn’t guarantee a Plant win, even in a half-ass manner.

Instead, he promised that Plant would be in great shape and be a hard task for the Mexican.

Pushed, he said we’ll see Plant retain his belts, but to close he asked people to watch, and again promised Plant will test Canelo. 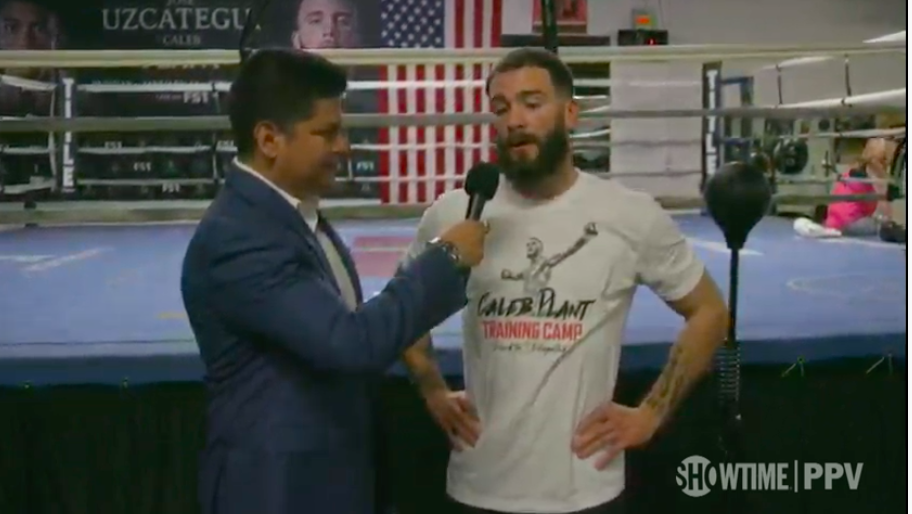 Flores says he believes that Plant deeply believes in himself for this fight. But one has to wonder, if maybe he isn’t trying to psych himself up with some of that talk. We shall see.

Trainer Justin Gamber told Flores that the mood in camp has been chill, and, he said, “cerebral.” It’s pretty much like any other fight, he said, because “there’ve been a lot of guys bigger and longer than Canelo, and it really hasn’t affected (Caleb).”

Flores asked about the bad blood; Gamber said these are “two alpha dogs,” and “it doesn’t surprise me…These are two alpha dog, two pitbulls and they’re ready to go out at each other.”

Other members of the Plant squad, including wife Jordyn Hardy, and support staffers Thell Torrance and Don House also checked in with the host. Yes, they are covering their bases in enlisting fight game lifers with major league experience, so I think it’s safe to say Plant knows that it needs to be all hands on deck for him to be leaving the MGM with all the straps. 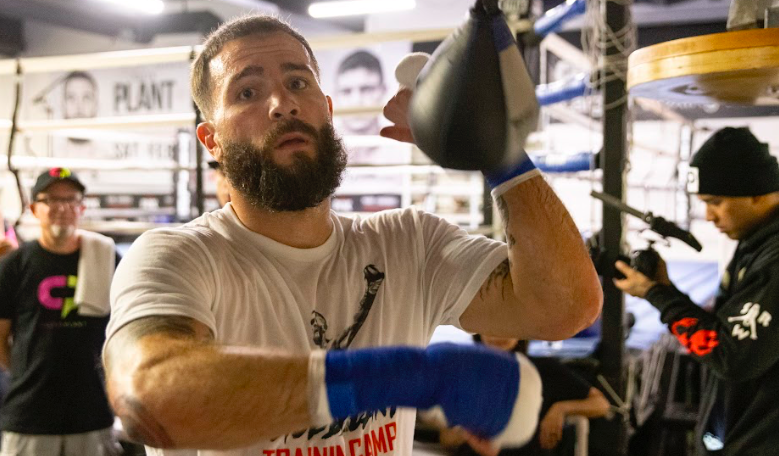 Plant has a strong “whatta you lookin’ at?” game. (Esther Lin pic)

Plant checked in with Flores again, after the 29 year old did some working out for the photogs.

“I’m peaking at just the right time,” Plant stated. “I’m locked in, I’m focused. The moment doesn’t seem too big. The closer we get, it seems like the smaller the moment is getting, so I’m ready.”