Vito Mielnicki Jr. gets a special present as a primetime headliner on Christmas night 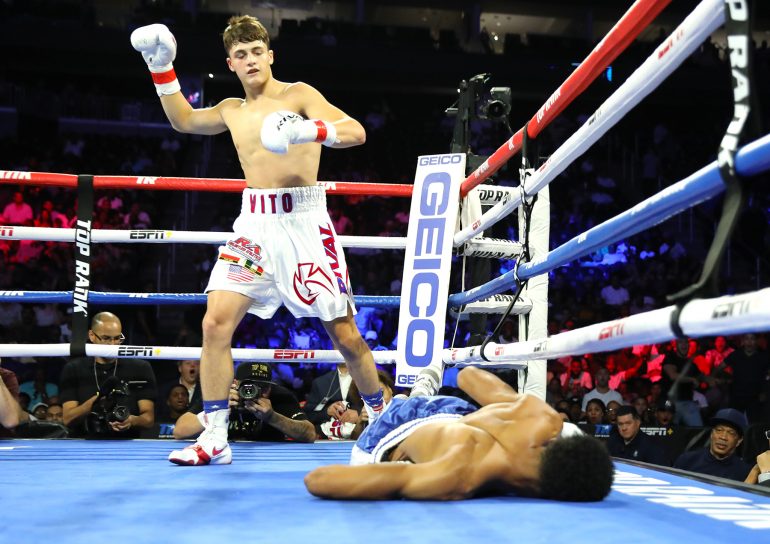 Vito Mielnicki Jr. has grown used to this, the sacrifices, the time spent away from family and friends during holidays, special occasions, and he knows more will have to come for him to get where he wants to go in boxing.

Mielnicki (9-1, 6 knockouts) will be the headliner on FOX on a primetime, national TV event from the Prudential Center in Newark, New Jersey, against Nick DeLomba (16-3, 5 KOs) in Mielnicki’s first scheduled 10-rounder.

The sacrifice: It will be on Saturday, December 25, Christmas night.

While everyone around him will be getting jolly and chubby during the holiday season, the 19-year-old welterweight phenom will be doing road work in the frigid cold of North Jersey and watching everyone else eat.

“To be honest, I don’t even look at them as sacrifices, because I love what I’m doing, and to get to where I want to go, you have to give up a lot,” said Mielnicki Jr., who graduated from West Essex High School, in North Caldwell, New Jersey, which is a stone’s throw away from the Prudential Center (actually about 15 minutes away).

“You have to sacrifice. Growing up, I missed family parties, family vacations, hanging out with my friends. I didn’t really have a youth. Growing up, I was always working, doing my miles. I had my fun growing up, but I also had my eye on one thing, and that’s being a legend in the sport.”

The payback is huge exposure. With most of the United States home during the holiday, it’s a prime time to garner an audience who will be channel hopping between a few live NBA games and possibly a college football bowl game.

“You have to be a psychotic about this, and if you’re not a little psychotic, Joe Goossen once told me, you’re doing the wrong thing,” said Mielnicki, a resident of Roseland, N.J. “It just goes back to loving what you do, and I love what I do. It means a lot of sacrifices have to be made. I’ll be training nearby.

“Training camp will begin Monday. I can’t wait. I’ll move into a house and it is kind of like moving into a college dorm room.”

Mielnicki is 6-foot and felt he learned a valuable lesson in his one professional loss to James Martin in April. Mielnicki was supposed to have a rematch against Martin in July, but Martin came in very over weight, so instead, Mielnicki stopped 26-year-old Noah Kidd (6-4-2, 5 KOs) at 2:32 of the second round.

It was the best Mielnicki looked as a pro.

In the coming weeks, Mielnicki has some scheduled sparring in Philadelphia with former welterweight titlist Danny Garcia, who is planning to make the move up to 154.

“I feel really good at 147 and I’ll continue to feel good, as long as I do the right things,” Mielnicki said. “I know DeLomba is a rough fighter, who likes fighting on the inside. My last performance wasn’t even a show. I took my time, was patient and I showed how I could bounce back. I won’t even mention the other fighter’s name, but someone was going to pay for the loss, and that pain is expensive.

“No one ever saw that side of me. It’s created a whole different outlook. I’m obsessed with being great. I’m fighting at home and I’ve been through it before, so I’ll be balanced.”

Muhammad Salaam, Mielnicki’s trainer, says Vito has a different drive since the Martin loss. Salaam had COVID-19 during training camp for the Martin and Mielnicki was offered to step aside, but he refused.

“Because Vito is a fighter, and he did what fighters do, he just wanted to fight,” Salaam said. “The Martin fight really woke him up. His defense is a lot better; he locks in more so on every detail. He’s more focused than ever.

“Vito’s father always made Vito work for everything, so as a kid, his preparation and the attitude has always been he has to earn his way. That came early in his life, from the way his father raised him. Vito wants nothing handed to him.”

DeLomba is 5-foot-8 and fights out of an orthodox style. Most of his career was fought at welterweight, and lost his last fight, going the 10-round distance against undefeated Richardson Hitchins in February.