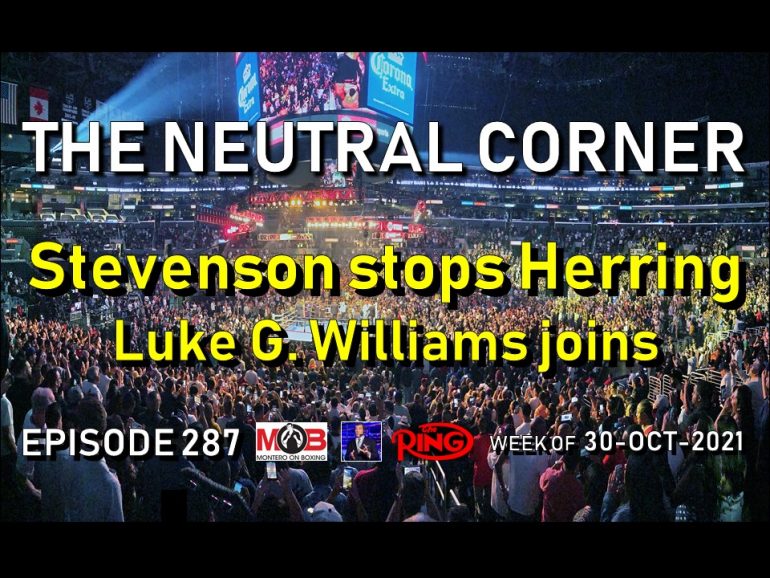 On episode 287 of The Neutral Corner boxing podcast, host Michael Montero was joined by fellow writer Luke G. Williams, who just wrote a new book. “President of Pandemonium: The Mad World of Ike Ibeabuchi” was released on paperback earlier this month. It highlights the life and career of the former heavyweight contender, who has spent most of the last 20 years in prison.

Williams spoke with Montero about what led him to write the book.

“The height of my boxing obsession was as a teenager in the mid-90’s,” he told The Ring. “I was following David Tua, he was destroying everybody. And then I read that Tua had just lost to this Nigerian heavyweight. I had not even heard of Ibeabuchi.”

“I remember reading that their fight had broken the record for amount of total punches thrown. I ordered a DVD of the Ibeabuchi versus Tua fight and I was blown away.”

“Ever since then I’ve followed him, and all the ups and downs that have ensued.”

The following night in Atlanta, Shakur Stevenson put on a breakout performance against Jamel Herring, scoring a TKO 10 win to claim his second world title. Stevenson dominated from the opening bell against the former Marine, pushing Herring back with lightning-fast combinations. Stevenson, who won the vacant WBO featherweight title in 2019, moved up in weight in his very next fight and now, just three fights later, owns the WBO title at 130 pounds.

“Some people complained that the Stevenson-Herring stoppage was early,” said Nacho. “I had no problem with it. I had Stevenson way ahead and Herring isn’t a knockout puncher.”

“I felt like the Stevenson-Herring fight should have been on Friday,” said Andrew. “The fight had to go on late because ESPN was waiting for a college football game to wrap up. There’s not a lot of competition Friday night sports wise. I wish boxing would put more events on Friday nights.”

“I was very impressed by Stevenson,” said Keith. “I’m not a big fan of him, I think he’s a punk to be honest. But he reminded me of Mayweather to an extent. I don’t see Oscar Valdez beating him.”

“I have respect for both Stevenson and Herring,” said Chris. “Stevenson pretty much had a shutout. And I thought Herring showed a lot of heart. He’s a top pro and a great guy. We need more people like Jamel Herring in the sport.”