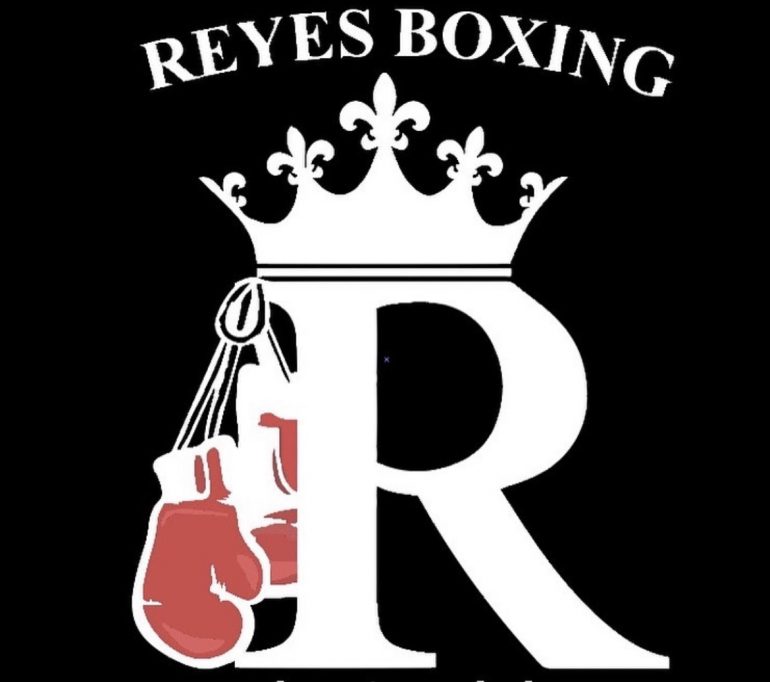 Next Friday, pro boxing will be taking place in Melrose, Massachusetts, as the second installment of the ‘Down & Dirty’ series as conceived by Michael Reyes, a Boston-area businessman, will play out.

I have a confession to make about this event: I’m rooting for Reyes to succeed, for tons of tix to be sold, for plenty of people to watch the scraps on PPV, and for the promoter to gain momentum in a market that is a hard one to crack.

I met Reyes in Portland, Maine when I called fights on FloCombat Fightnight Live Sept. 14; Reyes co-promoted the collection of scraps in that New England town, and I was impressed by his mix of intensity, amiability and as I figured out a bit later, the conviction in his voice when pledging to get this ‘Down & Dirty’ series off the ground, feed it, and watch it get stronger, grow, and pay dividends on the way.

Nah, I’m not so much talking about money, I sense that Reyes does A-OK as a business owner, I’ve figured out his work ethic is upper echelon. I could be wrong, though I don’t think I am, but I sense that Reyes is in this as a labor of love. 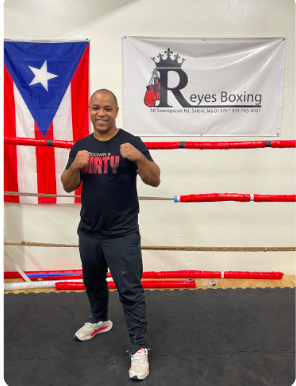 I asked Michael Reyes why…Why look to build a boxing promotion business? In Massachusetts, in New England, not a pro boxing magnet. He answered, and I came away believing in his chances.

I had asked him to tell me WHY, why is he looking to set that high bar for himself, and grow a fight series in a region renowned for their ardent mania at following pro sports teams, but not for their overwhelming warmth toward the sport of boxing. That’s not to say New Englanders can’t and won’t back a boxer, they will, but it’s understandable, the citizens are picky. Right?

The Patriots are annoyingly successful to those outside the region, while Red Sox were the main mistress of the area for fifty years, the Celtics maintain a solid base of rooters and Boston can get into a mode where it’s a hockey town first (if only for four weeks of the years)…All those franchises are to a degree or another a top tier outfit. So, the degree of fondness or even awareness of boxing for New Englanders is attached to the presence (or lack thereof) of a standout pugilist.

Maine waved the state flag pretty good for Joey Gamache in the 80s-90s; Connecticut is the strongest of the six states, because boxing is always a presence at their casinos, Foxwoods and Mohegan Sun, plus they consistently keep gyms open which introduce young people to the sport and the character building it imbues; Massachusetts will back a guy (Rocky Marciano, Marvin Hagler, not that many more etcs) when it’s someone of exceptional caliber, or a gritty grinder, like a John Ruiz, who claws his way to title shots, a character boosted by an entrancing back-story, like Peter McNeeley, or the lovable battler Micky Ward; Rhode Island boasts the OG tenure of Jimmy Burchfield Sr, who deserves another Vinny Paz type talent (with a similarly compelling personality), and is in some ways as strong as he’s ever been in four decades in the trenches; New Hampshire features fight nights put together by Boston Boxing, and fighter/promoter Chris Traietti also likes to put his content inside the ‘Live Free or Die’ states’ confines, and c’mon, the Hampton Beach Casino will always hold the odd Friday or Saturday for fights; and Vermont has a Boxing Control Board and there is always at least one Vermont resident, if not native, on the East Coast circuit every other year or so who belongs to the Record Builders Are Us union.

So, what brings Reyes into this realm? Why boxing? He owns a Golds Gym, and other stuff, why bother with boxing? I asked him to start near the beginning. “I was born in Boston, only child to a 16 year old mother,” Reyes related. “My uncle helped me find boxing at 9 years old. I had 64 amateur fight, I was 60-4. National JO champion, then to military University, and time as a Marine Corps officer. Boxing saved my life, prevented me from being a statistic on the city streets.” OK, why go the promotion route? “I am a promoter because I want to give back to boxing for saving my life,” he stated. “Down & Dirty is going to be a series that brings boxing back to the days of Tuesday Night Fights. We are going to bring in the next generation of boxers and give them a voice, so to speak. My mission statement is to bring the crowd quality fights and offer the growth to fighters that they need to reach for the stars.”

And why ‘Down & Dirty?’ I like the name, the t-shirts look good… 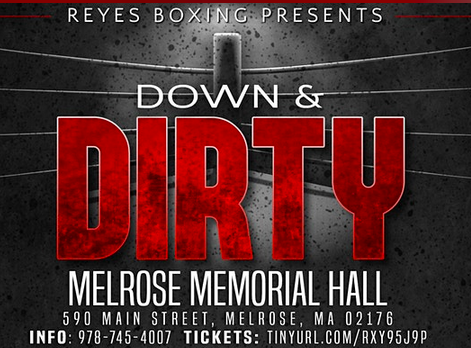 “It refers to the idea of fighting,” Reyes said. “That you’re down to stand up and fight, you’re not afraid to mix it up. There is a harsher side to boxing, sometimes there’s less of the gentleman aspect of it, because I feel like people are all about the fight and less about the idea of the chess match and the beautiful side of the sport. Mike, that’s why I went with ‘Down & Dirty.’ That’s the type of fights I want, back and forth brawls that sell boxing!”

And speaking of “stars,” or, at least, the featured headliner in Melrose; he is super welterweight Jeovanis Barraza, age 26, who holds a 20-1 (15 KOs) record. I asked for his short bio: “I was born in Barranquilla, Colombia,” the boxer told me. “I have three brothers and one sister. My father and mother are hard workers in Colombia. I started boxing when I was 10 years old. I saw Edison Miranda fight and knew that I wanted to be on that stage one day. (Miranda was the best known Colombian fighter for a spell, in 2005-2006-2007+, when he was being built up as a contender.)

“I had to work hard,” Barraza continued, “because it did not come easy to me. I was not a very strong child and I had to learn how to box well until I started to get stronger. I spend some time in the amateur ranks. I had about 89 fights, 71-18 was my record. I was close for the selection of the national team but when I didn’t make the Olympic team I decided to turn professional.”

That happened in 2014. His progression was strong, he stayed unbeaten until he met Gabriel Maestre—yeah, you know that name— the Olympian having his pro debut, in July 2019. That TKO loss is a learning lessons, he says. To bounce back, he beat 19-3-3 Fernando Silva in December of 2019, and bested Jose Agustin Julio (24-9-1) in December 2020. Every one of his bouts were in Colombia, but now he’s going to the land of warped and wonderful spoken “Rs,” where Dunkin Donuts are everywhere the eye can scan, where Reyes is laying down the foundation for D n D. 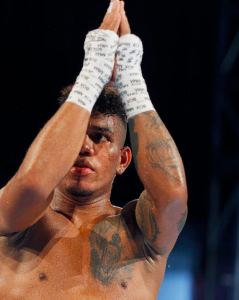 Barraza has a contract to sign on the Jaime Munguia-Gabe Rosado topped Golden Boy card Nov. 13. No extra pressure on him though, right?

“I am excited to be here with Reyes Boxing, my trainer Michael Reyes has worked with me to fix some of the flaws in my game,” Barraza stated.

OK, and what will I be looking at, I asked Barraza, when on Oct. 29 I’m ringside in Melrose, Mass. calling the action on Throwdown Sports Network?  “I am a boxer/puncher. I possess power in both hands, and love making my opponent miss his shots.” He’s to be stepping to the line on the nine bout card against Jorge Martin (13-7-1, from Argentina). Jorge is a good fighter, but I am on a different level and plan on ending this fight before the fifth. And why am I doing this? I am doing this for my family, my dreams, and to put Colombia on the map.”

It’s right now Saturday night, at 9:09 PM ET as I type this story. I’m thinking about why some of us do what we do. This isn’t a route to fortune or fame, I’m in a dying industry, but I hang on, and hang in because it’s what I do, it’s what I know how to do best, I’m stubborn and also scared to admit that boxing journalism is not something I’d heavily recommend any person today try to pursue as anything other than a hobby. Me and Reyes chatted on the phone a little after 7, he told me he was ferrying his 5-year-old to somewhere or another, so he couldn’t talk long. The boy called out a hello to me, and his dad asked him what he wanted to be when he grows up. “A boxer,” Hudson James Reyes announced. “Muhammad Ali is my favorite.”

Good role model, I said in response. Then, Reyes told me about other business for Reyes Boxing–Juan Carlos Abreu, a 23-6-1 Dominican, fights in London on Oct. 29, the same day as D n D 2. Also, Reyes Boxing works with Bryan Perez Castillo, who is also Dominican, and owns a 16-1 record, and avenged a loss to Felix Valera as part of a current five fight win streak.

Now, Reyes really has to go, his son needs to get to where he’s going. So I bid him adieu..and of course, we are messaging a couple hours later, I’m asking him if Castillo has a fight scheduled, or naw.

It’s 9:29 PM ET, I have the ESPN fights streaming in another tab, so it’s time to post this story. Why am I doing this on a Saturday night when I could be fine dining, purely relaxing, or whatever? I am doing this out of habit, and from a place of love, too. And because I don’t get tired of people like Michael Reyes going deeper into the sport to prove something, to make an impact, because boxing has been good to them, and chronicling how that goes.