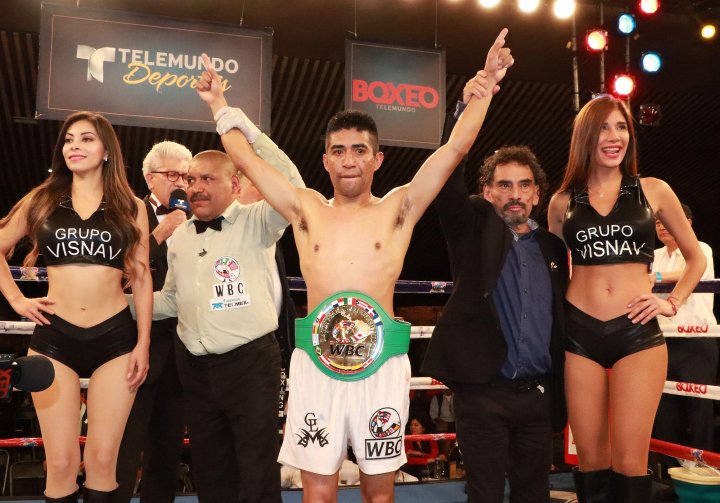 It was experience versus youth with Lopez, 39, a former WBC junior flyweight titleholder, the more effective fighter against the physically bigger Soto, who was 16 years his junior.

It was a must-win for Lopez, who entered the fight having lost five of his previous eight bouts, including knockout losses to then-WBC titleholder Kenshiro Teraji (twice) and then-WBO titleholder Angel Acosta. In his last bout in December 2019, Lopez lost by unanimous decision to flyweight prospect Muhammad Waseem.

Soto was taking a major step-up in opposition against Lopez. His last fight took place just over a year ago, when he scored a first-round knockout of the unheralded Angel Berrio.

Southpaw Lopez (37-11, 19 knockouts) was the aggressor in a competitive opening round, but Soto attempted to connect to the body when both stood in the pocket in the second. A left hook momentarily stunned Lopez, who did well to recover and outbox his man for a short period.

An accidental clash of heads opened a cut above the hairline of Lopez in Round 4, and time was called by referee Alfredo Uruzquieta, The ringside physician examined the cut, which was bleeding profusely, and when the action resumed a Soto right cross wobbled Lopez.

Both fighters had their moments in the fifth. However, another clash of heads opened a cut above the left eye of Lopez and this time the bout was stopped. Rather than take the fight to the scorecards, referee Uruzquieta observed that Soto intentionally butted his opponent and ruled a disqualification,

Lopez was content to not only get back in the ring but return with a win.

“The pandemic affected us a lot,” said Lopez. “That didn’t stop us from training. We demonstrated that tonight as we fought an intelligent fight. Unfortunately, the kid (Soto) started using his head and opened up two cuts. We didn’t know how bad that cut (in Round 4) was. I calmed down after I was told it was near the top of my head. But that cut in Round 5 was the one that halted the fight.

“We noticed that the more I connected, the more he was affected from those punches. That was the plan from the beginning of the fight, which was to take him into the later rounds and have him slow down because of the punches. I kept seeing on social media that it would be a miracle if I won. Well, the miracle did come after all. Now I wait for a world title shot.

In a clash of unbeaten flyweights, Brandon Jimenez (5-0, 2 KOs) knocked out Kevin Cisneros. A right-left combination to the head dropped Cisneros (3-1, 3 KOs), prompting an immediate stoppage at 0:34.

Featherweight Eric Pabon of Puerto Rico improved to 2-1 (1 KO) by knocking out Anthony Fortozo at 2:37 of the fourth round.