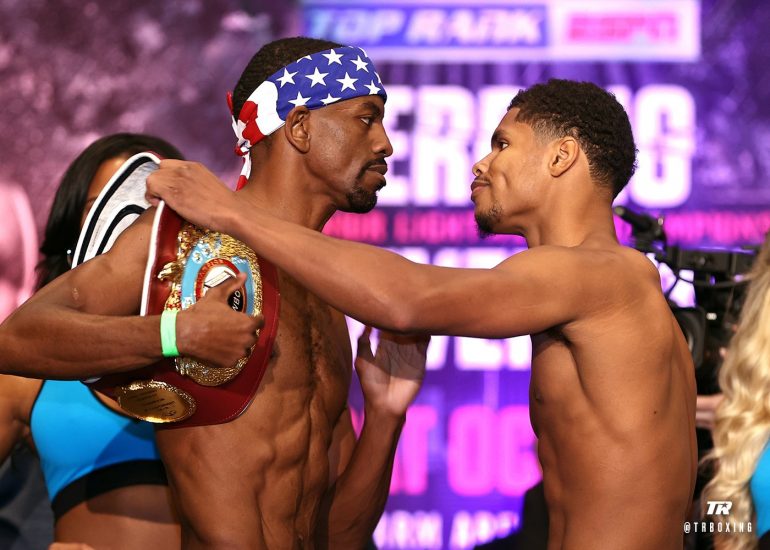 ATLANTA – Jamel Herring and Shakur Stevenson made weight without any issues this afternoon. Herring (23-2, 11 knockouts), the reigning WBO junior lightweight titleholder, weighed in at 129.8 pounds. Stevenson (16-0, 8 KOs), the challenger, came in at the division limit of 130 pounds.

The stare down was pretty intense. Herring remained stoic and expressionless, barely even blinking. Meanwhile, Stevenson shifted his weight side to side, pursed his lips and briefly cracked a smile. About 40 seconds in, he reached over and grabbed the champion’s belt with his left hand. Undeterred, Herring remained cool and simply pushed the youngster’s hand away. Security quickly rushed in to separate the fighters before things could escalate further.

Stevenson had pulled this same move earlier in the week at the final press conference. Herring seemed prepared for it today. He even stepped forward after brushing Stevenson’s hand aside, while the challenger backed up and began talking trash.

You could feel serious tension between the two. Hopefully it spills over into the ring tomorrow night at the State Farm Center.

Today’s weigh-in was closed to the public, but media members were in attendance. It was streamed on Top Rank’s YouTube channel: