Veteran Rosado believes experience will be key against Munguia 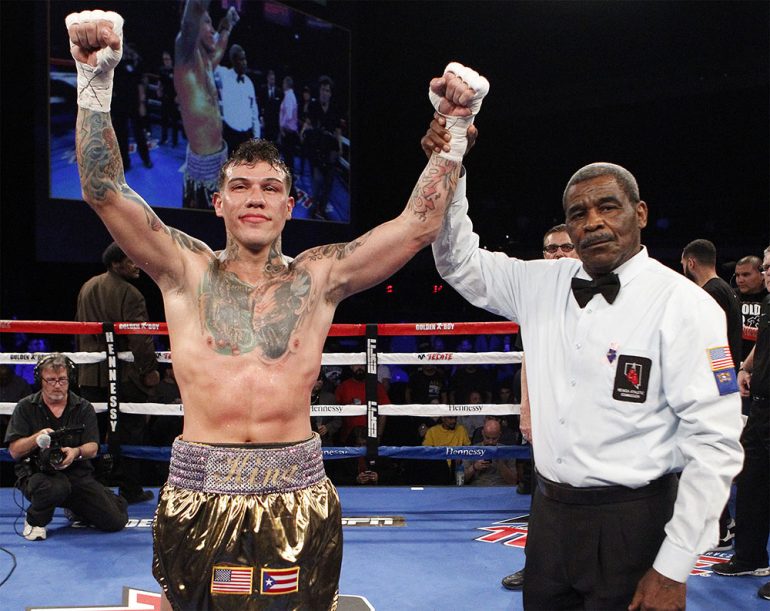 Saturday, June 19, was just like any other day for most people, but for “King” Gabe Rosado, it was an upset special for the ages as he erased Bektemir “The Bully” Melikuziev and the southpaw’s previously unblemished record with an overhand right in the third round of their slated 12-round match-up in Texas.

But can Rosado make it two upsets in a row? The stakes could never be higher on November 13 as the 35-year-old takes on unbeaten middleweight contender and former 154-pound titlist Jaime Munguia in a Mexico vs. Puerto Rico showdown at the Honda Center in Anaheim, California.

Albeit he has taken a number of lumps during his career, Rosado (26-13-1, 15 KOs) has faced the best fighters at 154 and 160 pounds, including Gennadiy Golovkin and Jermell Charlo, David Lemieux, and Daniel Jacobs.

“I definitely have the experience on my side,” he told The Ring. “I think [Munguia] has a great trainer in [former four-division champion and International Boxing Hall of Famer] Erik Morales, but one thing you can’t teach is experience.”

Yet it’s not just Rosado’s experience that is conspicuous, but it is also his willingness to adapt and learn. In 2019, he joined forces with Hall of Fame trainer Freddie Roach.

“It’s more mental than anything,” Rosado added. “I think the mistake that fighters make when things aren’t going their way is they don’t change anything. They stay the same thinking they’re going to get a different result. And that never happens.

“I think you just have to be truthful with yourself and look at how you can do things differently.”

It all starts with maturity. And for Rosado, it is ingrained in his blood. After getting dropped in the first round from a body-head combo, he immediately knew what he did wrong. Rosado subsequently explained how he set up “The Bully” for the overhand right that put him to sleep.

“After he caught me in the first round, I switched up my style,” Rosado continued. “Then, coming into the second round, I changed my stance. When I knocked him out with that right hand, I got low.

“I got low to take away his body shot. I got really low, and when he threw that body shot, that was how I was able to connect with that shot to the chin.”

Since linking up with Roach, Rosado has had four fights, two wins, and two controversial losses. The defeats came to Maciej Sulecki, who he floored twice in the final round after getting off the canvas twice himself, and Daniel Jacobs in a dreadful encounter, but one that most people thought he won. He also fought Luis Arias to a 12-round draw in a November 2018 bout that most ringside observers thought he deserved to win. At the time, Rosado was trained by Billy Briscoe.

After coming out on the raw end of so many decisions, how is Rosado able to keep going?

“Again, it’s all mental. Mental toughness,” he said. “I’m also very open to changing things. I’m open to changing my stance or maybe where I’m positioning my hands. You can never stay the same and expect a different outcome.

“That’s the key [to surviving in boxing] is having an open mind and listening to your trainer.”

The 25-year-old Munguia (37-0, 30 KOs), of Mexico, has also significantly benefitted from switching coaches. Out stepped Robert Alcazar, who for years was Oscar De La Hoya’s lead trainer, and in stepped Morales. Under his tutelage, Munguia has evolved from a one-dimensional fun action fighter with an average ceiling into a multi-dimensional boxer with solid speed and the ability to unleash combinations.

However, Rosado still believes he has the edge over Munguia.

“I expect him to be Jaime Munguia. He’s going to come in and be tough and aggressive. But he has one speed. There are no gears to Jaime Munguia.

“I feel like the fact that he has that one gear, I’m going to be able to control him. It takes a certain experience and a certain skill set to understand how to switch speeds. I think I will use that to my advantage.”

Mungiua and Rosado expect Fight of the Year