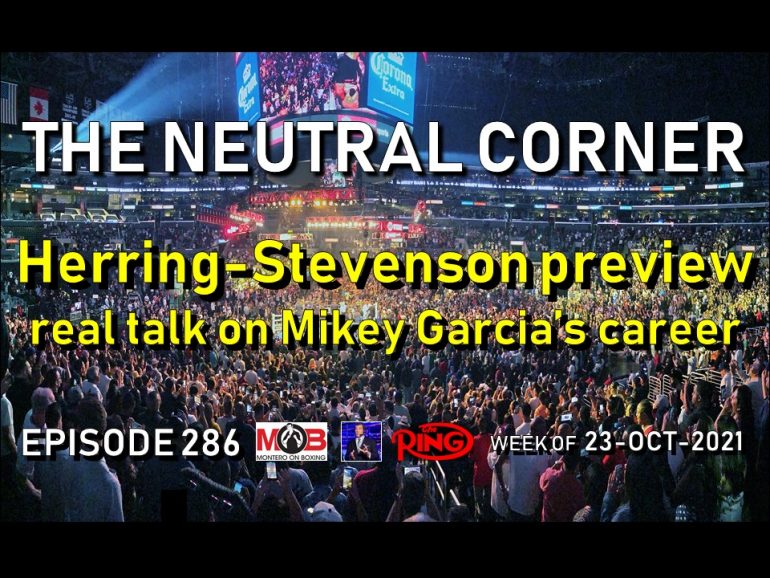 On episode 286 of The Neutral Corner boxing podcast, host Michael Montero caught up on the latest news.

Ryan Garcia, who was set to face Joseph Diaz Jr. later this year, had to withdraw from the fight after breaking his right hand in training. On Monday, Garcia underwent surgery to repair the hand. He posted photos from the hospital on his social media accounts.

Yet it was another Garcia, Mikey Garcia in fact, that was the subject of a heated rant from the host this week. Montero broke down Mikey’s career highlights and why he feels much of his legacy is built upon smoke and mirrors. Many of the listeners on the live chat and callers to the show agreed.

On Friday, October 15, Emanuel Navarrete and Joet Gonzalez headlined a Top Rank show from San Diego that was streamed on the ESPN app. It was an action-packed, albeit mostly one-sided affair, that Navarrete (35-1, 29 knockouts) won by unanimous decision. The Mexican defended his featherweight title for the second time. In the co-main, undefeated welterweight prospect Giovani Santillan, a San Diego native, improved to 28-0 (15 KOs) with a UD 10 win.

On Saturday, Mairis Briedis defended his Ring Magazine and IBF cruiserweight titles with a TKO 3 win over Artur Mann in his homeland of Latvia. In England, heavyweight Hughie Fury and middleweights Chris Eubank Jr. and Savannah Marshall all scored stoppage wins.

In Fresno, California, Jonathan Gonzalez upset Elwin Soto by split decision, taking his junior flyweight title in the main event of a Matchroom Boxing USA show. An even bigger upset occurred in the co-main, however, as Spaniard Sandor Martin beat the aforementioned former multi-division titleholder Mikey Garcia by majority decision in a welterweight bout.

Andrew likes Herring to beat Stevenson, but feels he may not get the decision. “I just can’t shake this feeling that we’re going to see our first robbery in a while,” he said. “We’re due for it. I don’t want it to happen to Jamel.”

“I think Deontay Wilder has kind of redeemed himself,” said Dane. “He put out that statement congratulating Fury. And I think he still beats most heavyweights. The one thing he does, he’s perfected it.”

Mikey Garcia showed up (for Sandor Martin) fat, happy and overpaid,” said Thad. “The guy doesn’t have his heart in boxing anymore.”

“Mikey has a career that’s forgettable,” said Sanch. “Nobody is going to say ‘let’s put on the Mikey Garcia fight’, so that should end the conversation right there.”

“I need my money back from Mikey Garcia,” laughed JT from Tampa. “He messed up a parlay bet for me last weekend. I had a five-fight parlay and he was the only one who dropped the ball.”

“These big pay-per-view cards rarely have a good undercard,” said Alex. “I like Canelo, I buy his fights. But at the end of the day, this Canelo versus Plant pay-per-view, with that undercard, it’s not worth it.”

“I think too many people are overlooking Caleb Plant,” said Brennan. “They forget that he had a decent amateur boxing. He had a kickboxing background. He can fight. I think he’s going to do better than people expect.”

“For me, in order for the lightweight division to move forward, guys like Teofimo Lopez and Devin Haney need to move up to 140 pounds,” said Anthony. “Because with the current champions at 135, it seems like there is never going to be a fight.”

“I’m looking at the Canelo versus Plant undercard, and I see Rey Vargas is fighting some random guy,” said Miguel. “Wasn’t he supposed to be fighting Gary Russell Jr? What ever happened to that guy? Where is he?”

“Oleksandr Usyk is the number one heavyweight in the world,” said Laurence. “The Fury-Wilder fight was entertaining, but the skill level was awful. I’ve seen white collar fights fought at a higher skill level.”

“The Navarrete-Gonzalez fight was great back and forth action,” said Nacho. “But Navarrete had to not only fight off Gonzalez, but referee Ray Corona as well. He allowed Gonzalez to hit below the belt several times.”