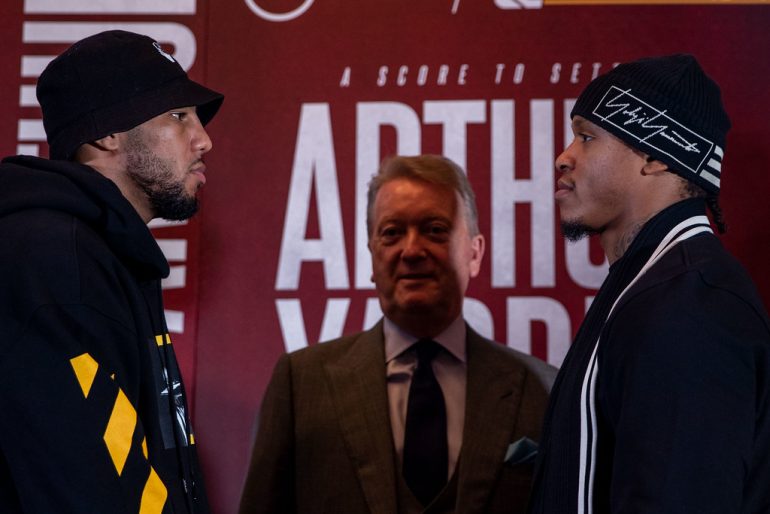 Also on the line will be the position as number one challenger to WBO World champion, Joe Smith.

The pair first met last December when Manchester’s Arthur (19-0, 13 KOs) edged out his great rival on a split decision after 12 rounds.

Now they will lock horns once again with even more at stake.

Here are a selection of quotes from today’s tension filled head-to-head meeting between the boxers and their camps, where Arthur’s trainer Pat Barrett eventually stormed out after clashing with Yarde’s coach Tunde Ajayi.

FRANK WARREN: Since the first fight Lyndon has gone into the number one position with the WBO and eventually you become the mandatory. That is at stake. It’s a crossroads for both of them and a fantastic fight where I think fans will see something a little bit special. It’s war and we are going to see a quality fight between two quality fighters. There was a contract with a rematch clause. I said to Pat I will try to get it on in Manchester but there was no date available and then we tried October in Birmingham and it didn’t happen. Now it’s on and it will be war. It’s even more meaningful then the first fight.

LYNDON ARTHUR: He (Yarde) didn’t want to come to Manchester and fight me. I believe they were too scared to come to Manchester. He is going to come out fast. There isn’t a chance on this earth he can outbox me. I know for a fact what he will try to do. The only thing he can do is try and knock me out.

YARDE: You (Arthur) got no fan base. It didn’t matter where the fight was and it (going to Manchester) didn’t get put to me. I don’t care where I fight. I have been to Russia to fight so all that talk is not right. I just said make the rematch happen. I don’t b*****t I don’t do excuses. Judges’ said I lost. The fight went the way it went and that’s it. If I land a shot and knock him down I wont wait for him to recover. I will finish the job. I am going to knock him out. Pat came in the changing room and said; ‘We was lucky, it was a close fight. I know how you’re going to come for the next fight I am going to do everything to not make the rematch happen. I want my boy to make so money.’ 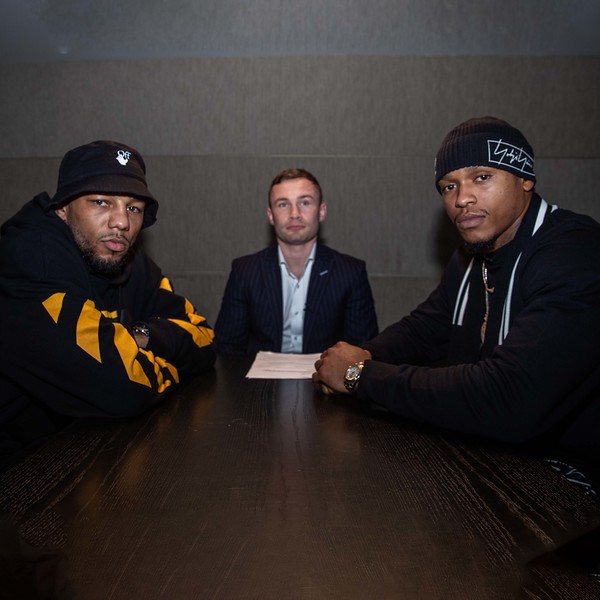 PAT BARRETT: I’m not here to entertain, I am here for the fight. Tunde said Yarde was going to knock Lyndon out before the first fight. He didn’t and that’s it. At the end of the day, the judges said he got beat. It was a close fight, but Lyndon only boxed with one hand. I came into the dressing room to show respect but Tunde didn’t even look at me. He has made a problem with me. Even if I don’t like you I respect you. I respect Anthony and I am going to prepare Lyndon for Anthony like he is a World champion. This is no walkover — it’s real. Respect is something that you earn and after the first fight we earned that as fighter and trainer. Anthony has never been overlooked and even though we was the champion before the first fight it wasn’t a backward step. If you are looking at World titles you have to beat World class operators like Anthony Yarde and he is a good opponent again. I said after to Anthony; ‘It was a close and Lyndon won with the jab,’

TUNDE AJAYI: I have never made excuses. It’s not in our nature. We know what Anthony was going through emotionally before the first fight. Tell me how you are supposed to perform at your apex when you have lost so many family members in a number of weeks? Everyone who saw the fight knows Anthony doesn’t box like that. He (Arthur) has made up a story about a spectacular jab, but won by one point and lost by six on another card. Lyndon isn’t calm enough for this. We will be calm and collected. I don’t know what Pat is talking about with this changing room situation. If my fighters have lost I am not going to be shaking hands and go hip, hip hooray after the fight. I have to let things digest. Let the gladiators do what they do and fight. The never wanted the rematch and tried to get out. Pat said after the first fight; ‘We don’t want that rematch,’ Lyndon and Anthony are going to get in the ring and settle the score.