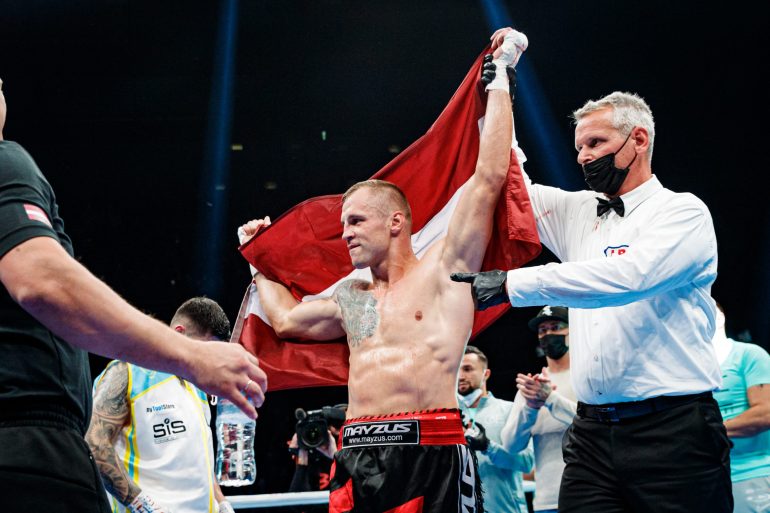 In a homecoming bout that may very well turn into a farewell bout for a few years, Mairis Briedis scored a decisive third-round stoppage win in front of his countrymen against Germany’s Artur Mann (17-2, 9 KOs) and thus defended his IBF belt and Ring Magazine world cruiserweight title on Saturday, Oct. 16 at the Arena Riga in Riga, Latvia.

Briedis returned to the ring for the first time following his spectacular win over Yuniel Dorticos in the final of the World Boxing Super Series in September 2020, and the Latvian did not disappoint his fans with his spectacular performance against a fellow once-beaten opponent who threatened to be a stiff test and was soundly defeated instead, succumbing at the 2.54 mark of the third episode under a demolishing attack by the champion.

In the first round, Briedis took his time to measure Mann’s mobility before testing him with his right-hand bombs, and then turned it up a notch in the second round with an even heavier two-fisted attack. Mann appeared to be taking it well, until a solid right hand deposited him on the canvas for an eight-count with less than 10 seconds left on the clock.

Briedis kept the pressure on in the third, charging forward and landing at will until he dropped Mann again with 40 seconds left in the round. Mann got up after retrieving his mouthpiece from the canvas and putting it back in his mouth, and only 20 seconds later he would go down again after a barrage of punches. Mann briefly complained about a low blow while dropping down to one knee midway through the protection count in obvious pain. He did get up before the count of ten, but the referee decided he had seen enough and stopped the action just as the round was coming to an end.

Briedis (28-1, 20 KOs) sustained a small cut on the bridge of his nose, likely opened during the final onslaught that ended the fight. He has indicated that this would be one of his last bouts in his native country before embarking on a barnstorming tour seeking bigger challenges and purses, both at cruiserweight and possibly heavyweight as well. His only loss came at the hands of former cruiserweight star and current heavyweight multiple titlist Oleksandr Usyk, who could be a target for Briedis’ ambitions in the near future.

Previously, Latvian native Jevgenijs Aleksejevs improved to 13-0 (7 KOs) after a solid test imposed on him by Estonian trial horse Pavel Semjonov (now 25-19-2, 10 KOs) over eight rounds in the super middleweight division. Semjonov showed no respect for the local fighter at any point during the action, taking the fight right to him and making Aleksejevs earn his victory the hard way. The surprisingly close scorecards, especially for a fight involving a local unbeaten favorite, reflected the intensity of the action.

In a four-rounder in the super middleweight division, local credit Francis Rozentals defeated Finland’s Topias Lepo by unanimous decision in a duel of unbeaten young guns. A significantly taller Rozentals (7-0, 2 KOs) chased Lepo (4-1, 1 KO) all over the ring for the duration of the bout, scoring repeatedly with a two-fisted attack while Lepo retreated and tried to counterpunch his way to safety.

In the opening bout of the international broadcast, France’s David Spilmont scored a mild upset over unbeaten Ukraine’s Bohdan Myronets with a unanimous decision win over six rounds in a heavyweight bout. Spilmont visited the canvas in the first, Myronets in the second, and they exchanged heavy blows in the next four rounds in close quarters, but neither of them managed to mount a significant lead. In the end, the judges rewarded Spilmont’s higher output. Myronets, based in Latvia, slipped to 3-1 while Spilmont returns to France with a slightly improved mark of 11-7 (7 KOs).

In an earlier bout, Britain’s Harlem Eubank stopped Nika Nakashidze in the fifth round of a scheduled 8-rounder in the welterweight division.