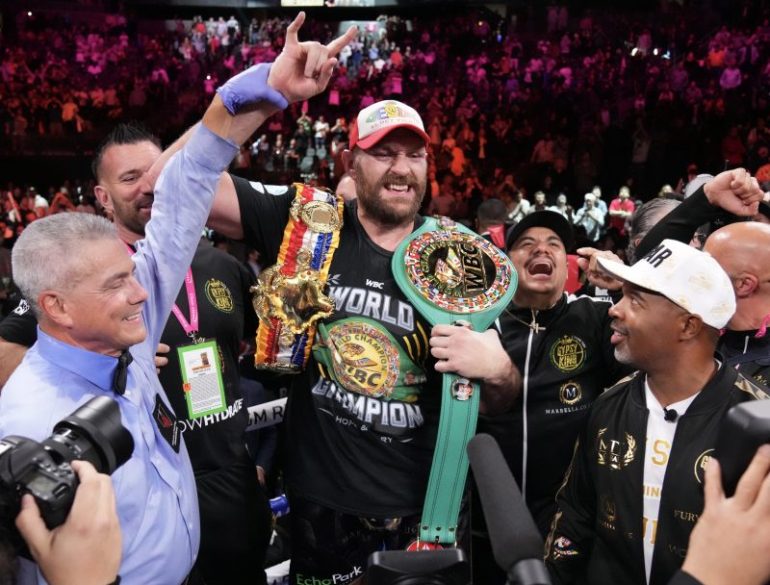 Like most of the boxing public, the Ring Ratings Panel viewed Tyson Fury’s hard-fought 11th-round KO of arch-rival Deontay Wilder as an instant classic heavyweight slugfest.

The Panel was unanimous in their praise for Fury (31-0-1, 22 KOs), who made the first defense of the Ring Magazine/WBC titles he won by stopping Wilder (42-2-1, 41 KOs) in seven rounds last February, and they were unanimous in their praise for the 35-year-old American puncher, who scored a pair of dramatic knockdowns in Round 4 and hung tough against the giant Englishman’s onslaught until the penultimate round, defiant to the bitter end.

However, the Panel was decidedly split on whether or not Fury’s latest triumph finally merited his inclusion in the magazine’s pound-for-pound rankings.

“I hate to lose Kazuto Ioka but I could see Tyson Fury entering at No. 10,” opined Wainwright. “Fury isn’t as easy on the eye as others, but he gets the job done.”

“Consistency is part of the ranking evaluations, and Fury has yet to taste defeat and despite not looking like an Adonis, he impresses on every level,” said Mulcahey. “I agree it is sad to see Kazuto Ioka exit, but my rationale is that perfection supersedes a slightly better resume of opponents. Plus, Fury’s biggest victories have come on the road whereas Ioka rarely travels abroad.” 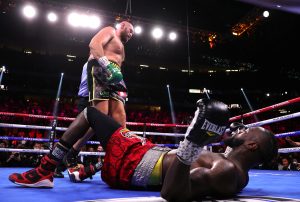 Michael Montero says Fury has to do more than beat Wilder to be considered a P4P player. Photo by Mikey Williams / Top Rank

“I can’t rate Fury pound for pound until he does something pound-for-pound worthy,” said Montero. “Beating Wilder doesn’t rate P4P in my opinion.

“Wilder’s best win to date is Luis Ortiz, who’s best win was Bryant Jennings coming off a loss, and Wilder was losing those fights before his power (and the Cuban’s age and limitations) bailed him out.

“If and when Fury goes up against the Usyk vs. Joshua II winner, we’ll have a pound-for-pound worthy heavyweight.

“And yes, I rate Usyk pound for pound because he’s a cruiserweight campaigning at heavyweight. And he just defeated the world’s third best HW in his backyard.”

Added Sugiura: “I was in Vegas. That was one of the most exciting fights I’ve ever covered in person. Kudos to both Fury and Wilder for showing a huge heart.

“But, as exciting as it was, we can’t forget the fact that was a fight Fury was supposed to win. He was knocked down twice and wasn’t dominant by any means. He dominated Wilder 20 month ago, but we didn’t rate Fury P4P then and I’m not sure we should give him P4P top-10 fighter status this time around. 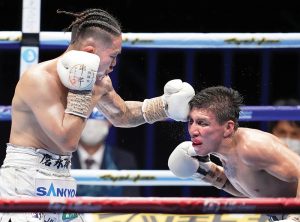 Kazuto Ioka (left) vs. Francisco Rodriguez Jr. The Japanese veteran is No. 10 in Ring’s P4P rankings.

“Ioka has a better overall resume. He impressively stopped a multi-weight world champion in Kosei Tanaka 10 months ago and defeated a top contender in Francisco Rodriguez Jr. last month. I personally didn’t like how he fought against Rodriguez, but, as of now, without bias, I still like Ioka over Fury.”

Added Gray: “My outlook on this is a bit different. I’m from the Bert Sugar/Jim Jacobs school that looks upon pound for pound as a platform to recognize fighters beneath the heavyweight division. That is essentially what it was created for.

“Right now, Tyson Fury is the best fighter in the world – period. He is the best fighter in the world because he’s The Ring Magazine/lineal heavyweight champion of the world. I give Usyk a pass because he came from the cruiserweight division and is mixing with much bigger men. For that same reason, I understood Evander Holyfield’s pound-for-pound standing back in the day, but I would never have been in favour of Wladimir Klitschko’s.

“Tyson doesn’t need pound-for-pound recognition and he rarely – if ever – mentions the subject.”

Added Mulcahey: “I think Fury going to Germany and beating long-reigning Wladimir Klitschko is a big feather in his cap.”

Retorted Montero: “Agreed Martin, but the Nandrolone thing earlier that year puts an asterisk on the ‘W’ for me.

“There was no VADA for that fight with Klitschko. Had UKAD properly/timely reported the results of Fury testing hot against Hammer, the IBF would’ve stripped him and perhaps that fight never even happens.

Before the Panel went down THAT particular rabbit hole, your friendly neighborhood EIC counted those for and those against Fury cracking our P4P top 10. We were deadlocked at three on each side of the argument (Anson, Adam and Martin saying “Yay,” Montero, Sugiura and Gray saying “Nay”), so a last call was put out for further Panel input. (I cast my vote/opinion only if we needed a tiebreaker.)

Panelist Tris Dixon gave his nod to Fury at No. 10. Panelist Diego Morilla went the other way. 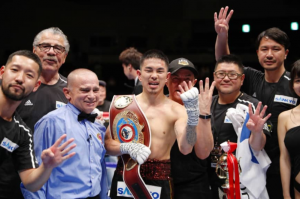 The Ratings Panel has love for the four-division titleholder from Osaka AND Tyson Fury. Photo courtesy of japantimes.co.jp

“Whenever the results and achievements are already there, I look at the ‘eye factor’ as a tiebreaker,” Morilla said. “Does Tyson Fury have it? Not quite, even though the results and the achievements are definitely there. And even so, I look at Ioka and I see two close decision losses against top opposition in a career in which he faced most of the best fighters in his divisions, while Fury still has to prove that he is able to deal with a lot of other different styles before he can claim to be as good as someone like Ioka. I do love Fury, but I’d love to see him looking that great in a few more fights before I move him up.”

Dixon and Morilla evened it up at four panelists on either side of the debate.

However, before I needed to include my opinion (and I generally prefer not to, just to keep the trolls out there in the boxing Twitterverse from claiming these are MY rankings and not THE RING’s), Wainwright, who first proposed Fury replacing Ioka, changed his mind after following the discussion of his fellow panelists.

“I’m happy for Fury to come in but would be sad to see Ioka exit,” Wainwright said. “I’m jumping ship. I’d prefer to keep Ioka at No. 10 for now.”

So, for now, The Gypsy King remains outside of The Ring’s mythical rankings. Fury fanatics will just have to be content with their man being the best heavyweight on the planet. 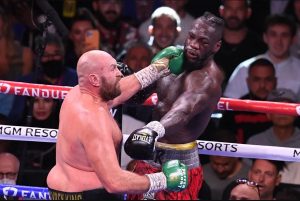 Fury and Wilder gave their all. Photo credit: Robyn Beck/AFB via Getty Images

“Fury retained his Ring and WBC titles in an off-the-floor classic,” said Wainwright. “It was much better than the second fight and showed a lot about both men. I would keep the ratings are they are. Wilder showed enough to potentially be rated above (No. 2-rated Anthony) Joshua. However, I wouldn’t move him up on a loss.”

Added Montero: “Fury is the champ, Usyk is No. 1, Joshua No. 2, Wilder No. 3. Both AJ and Deontay are coming off losses, but Wilder’s was much worse.”

Added Mulcahey: “Fury stays atop, naturally, while I would not drop Wilder below (No. 4-rated Dillian) Whyte since Whyte’s equally devastating loss came to lesser opponent in Povetkin. I would not elevate Wilder above AJ, whose most recent setback was not as emphatic as Wilder’s. Plus, AJ has shown the ability to avenge loss. I’ve not seen that from Wilder yet.”

Welterweight – Manny Pacquiao, who announced his retirement on Sept. 29, exits the rankings. David Avanesyan (28-3-1, 16 KOs), the European champ currently on a five-bout KO streak against solid opposition, enters at No. 10.

Strawweight – Knockout CP Freshmart remains at No. 1 after defending his WBA title with a third-round stoppage of unrated Siridech Deebook.