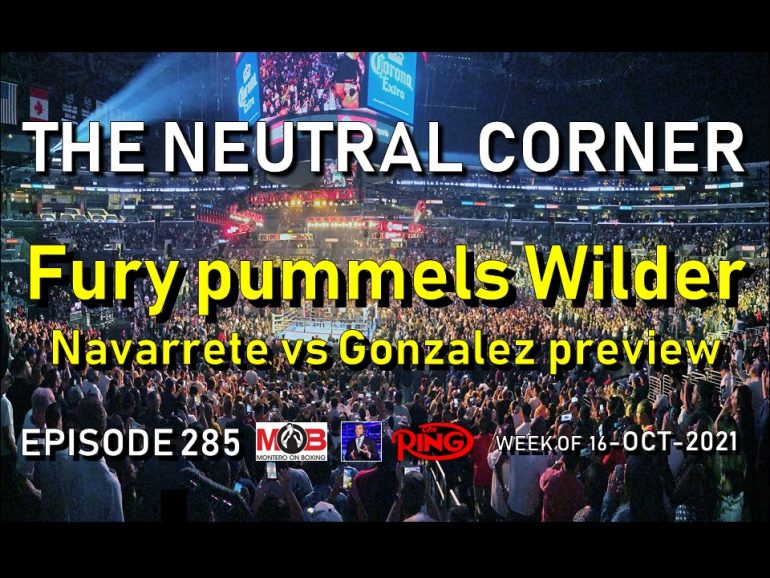 On episode 285 of The Neutral Corner boxing podcast, host Michael Montero gave his thoughts on the passing of former welterweight champion Tony DeMarco, who died Monday at 89-years-old. Born Leonardo Liotta in Boston’s famous “North End” neighborhood, DeMarco would amass a record of 58-12-1 (33 knockouts) as a pro, and was inducted into the International Boxing Hall of Fame in 2019.

In other news, Gervonta Davis (25-0, 24 KOs) will be facing lightweight prospect Rolando “Rolly” Romero on December 5 in Los Angeles. Despite the fact that Romero (14-0, 12 KOs) is unproven, yet to face a top-ten opponent, and many feel he lost to Jackson Marinez last August in one of the worst decisions of 2020, he will headline a Showtime PPV card with Davis. Details of the fight, including which division it will be contested at, are still to come.

There were two cards of note on Saturday, October 9. In England, Liam Smith scored a TKO8 win over Anthony Fowler. The junior middleweight fight headlined a Matchroom Boxing card on DAZN. In the co-main, Troy “Trojan” Williamson landed a monster left hook in the tenth round against Ted Cheeseman, to end their junior middleweight war in style. It was a knockout of the year and fight of the year contender. 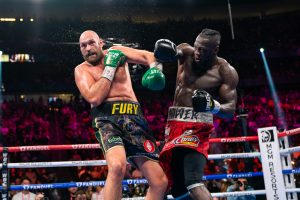 In Las Vegas, Tyson Fury survived two fourth-round knockdowns to once again stop Deontay Wilder in a heavyweight fight that exceeded expectations. Wilder was down in the third, tenth and eleventh rounds. The fight was highly competitive early on, but Fury took control in the fifth round and dominated Wilder down the stretch. Unlike the second fight, which former trainer Mark Breland correctly stopped in the seventh round, new trainer Malik Scott allowed his fighter to sustain unnecessary punishment. The rivalry ended for good in the eleventh, when Fury put Wilder down for good. It was an absolute beating that “The Bronze Bomber” may never fully recover from.

Otto from Philly feels that potential future opponents for Deontay Wilder should be wary of making a fight with him. “As of right now, if I’m a guy like Andy Ruiz or Anthony Joshua, and I saw the accusations that were thrown at Tyson Fury, is that something I really want to deal with?”

“I thought Wilder was going to bring everything that he had and he did,” said Rich. “He showed tremendous heart.”

“The Fury vs Wilder trilogy was about as competitive as men and mice,” said Thad. “After Wilder landed the luckiest right hand in the fourth round and Fury got up, I knew the fight was over.”

“I’m not going to take it easy on Wilder,” said Dane. “What he did to Mark Breland, it was really disappointing. All of the conspiracy theories after the second fight were created on YouTube, on forums. Wilder didn’t create them. But he got a hold of and added fuel to the fire.”

“Fury was a cherry pick gone wrong for Wilder,” said Greg. “He had all those title defenses but he wasn’t fighting anybody. He had an offer to fight Joshua but he chose to fight Fury instead.”

Kevin asked, “How do you think it happens with these conspiracy theorist YouTube channels? Andre Ward was saying it was a long count (when Wilder dropped Fury) in the fourth round. When commentators are spewing misinformation, of course YouTube will.”

“The fight was sloppy, but it was entertaining to watch,” said Nacho. “Wilder has huge heart and his will to win was nuts, but that beating he took is going to be tough to overcome.”

“I think Usyk has a good chance to beat Wilder,” said Carlos. “I used to think Wilder could catch him, but now I feel Usyk would outbox him. And I used to think Fury would beat Usyk, but now I’m not so sure. Usyk has enough movement to work around the awkwardness that Fury has.”

I think the Fury-Wilder3 fight was overall better than the Joshua-Usyk fight,” said Hamed. “Maybe it was not fought on the same skill level technically, but this one and the Joshua-Klitschko fight were the two best heavyweight fights we’ve seen in years.”

“I want to see what will happen with Wilder’s passion in the ring once it’s not against Fury,” said Jon Uddin. “I think Fury really got somewhere in his head. It felt similar to what Ward did to Kovalev in their second fight.”

@4:30 News and Notes (Tank Davis and another PPV cherry)