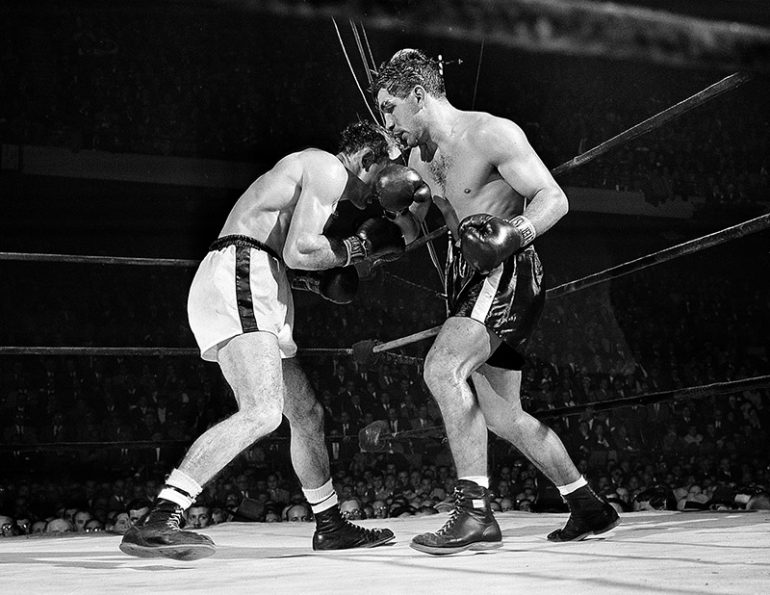 Tony DeMarco, right, lands a right to the head of Carmen Basilio in the seventh round of their rematch at the Boston Garden in November 30, 1955. (AP Photo)
11
Oct
by Anson Wainwright

Editor’s Note: This feature originally appeared in the October 2018 issue of The Ring Magazine.

Tony DeMarco’s reign as welterweight champion was brief, but he earned the reputation of a rugged, strong battler who was eager to fight anyone in his 14-year pro career.

DeMarco, one of the oldest living former champions at 85, won the world 147-pound championship when he stopped Johnny Saxton in 1955 but might be best known for two brutal wars with Carmen Basilio, one of which was the Ring Fight of the Year.

DeMarco, named Leonardo Liotta at birth, grew up in the Italian North End of Boston, where he discovered boxing at 12. He remembers weighing 95 pounds when he was 15 and training out of the Burroughs Newsboys Foundation club.

The boy demonstrated talent in unsanctioned youth competitions and wanted to become a full-fledged amateur. One problem, though: He was too young according to rules at the time.

“I was quite good,” he said. “I think I lost one fight in maybe 40-something-odd fights as a young boy. Then I decided to be an amateur fighter. In 1947, in order to be an amateur fighter, you had to be 18 years old, so I wasn’t able to participate. What I did – a lot of people did the same thing – was borrow someone’s name who was 18.”

“I borrowed Tony DeMarco’s birth certificate and fought under Tony DeMarco when I was 15,” he said. “When I got to be 18 … I kept my friend’s name.” 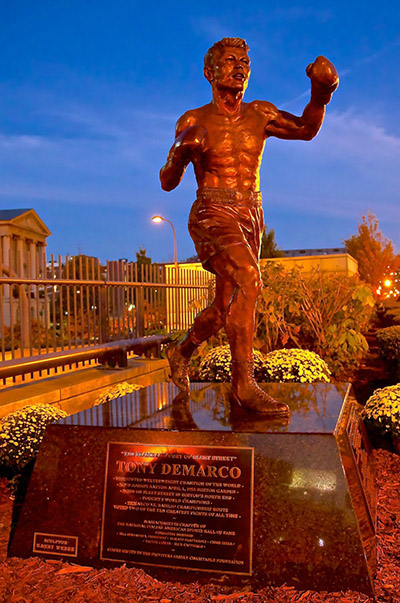 Statue of DeMarco in Boston. (Photo by Matt Conti)

As an amateur, he said, he had between 20 and 30 fights and lost only a couple. He turned pro at 16, initially fighting in and around Boston.

DeMarco’s breakthrough victory came in 1953 when he edged future lightweight titleholder Paddy DeMarco (no relation) by a 10-round split decision. Then, early in 1955, DeMarco drew with reigning lightweight beltholder Jimmy Carter in a non-title welterweight bout.

That result led to a shot at the welterweight title a few months later. On April 1, he met Saxton at the Boston Garden.

DeMarco was ahead on two of the scorecards entering the 14th round, in which he dropped and hurt Saxton, forcing referee Mel Manning to end the contest. Leonardo Liotta was a world champion.

“It was a dream come true,” he said. “Johnny Saxton beat a lot of fighters who were champions too. He was a great fighter.”

DeMarco’s reign lasted just two months, as he was knocked out twice by Basilio in classic wars the same year he won his title.

Basilio stopped DeMarco in the 12th of a scheduled 15 rounds on June 10 in Syracuse, New York, to win the title and then recorded the exact same result on November 30 in Boston. The latter fight was the 1955 Ring Fight of the Year.

More than a half-century later, DeMarco remains a popular figure in his North Boston neighborhood, where a street – Tony DeMarco Way – is named after him and a statue of him was erected in 2012. He also wrote an autobiography titled “Nardo: Memoirs of a Boxing Champion.”

DeMarco lives in the West End of Boston with his wife, Dorothy.

He spoke to The Ring about the best he fought in 10 key categories.

Kid Gavilan: He had fast hands. He gained points but I gained enough to win. George Araujo from Providence, he was quite fast. I stopped him in five rounds but he was quite good.

Gavilan: He had terrific footwork. When you were looking to aggressively attack him, he was able to move from side to side, in and out – and he was that fast.

Basilio: He should have gone down. (Laughs.) … He was very strong.

Gavilan: I would say Kid Gavilan. He had that famous bolo punch and he utilized that quite well. You had to watch out for that. He was in and out as far as tactics were concerned. It was hard to find him with a punch. I remember getting in close trying to get him to the ropes, but in doing that he had his own tactics. He had the jabs and the ability to bounce off the ropes into a different direction. He was clever, a champion for a long time.

Johnny Cesario: He was able to jab two or three times and move, and the next thing you know he’s away. That’s how fast he was. He had speed and a good jab.

Basilio: Virgil Akins was a terrific puncher and so was Carmen Basilio. I would say those two were exceptional. I would think Basilio was number one.

Gavilan: Kid Gavilan had a good defense. He was around for a long time. He knew his different tactics, he knew his tricks. He was a real polished fighter. I had to fight and score points. Fortunately I did.

Gavilan: Kid Gavilan. You’ve got to give him his respect. Johnny Cesario, give him some skills as a boxer. I’d say Kid Gavilan.