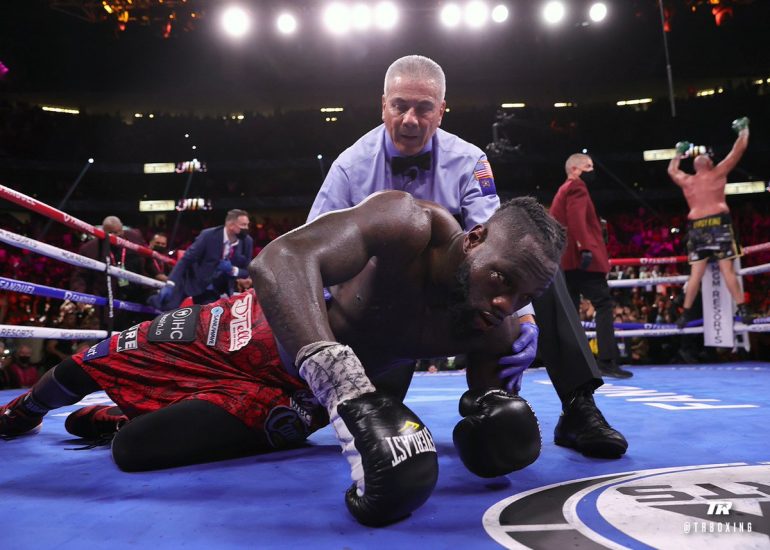 Tyson Fury dropped Deontay Wilder three times en route to stopping the former WBC titleholder in the 11th round of an entertaining heavyweight slugfest, but the defending Ring Magazine/WBC champ had to dig deep and get up from two knockdowns of his own to the thrill and delight of a packed T-Mobile Arena in Las Vegas on Saturday.

Fury (31-0-1, 22 KOs) won his trilogy and legitimate grudge match against Wilder with better activity and footwork, constant mauling on the inside, but most of all with a lot of guts. The 33-year-old native of Manchester, England took his share of monster punches from Wilder (42-2-1, 41 KOs), who showed more heart than his vaunted power punching, which seemed a bit slower than usual, perhaps due to the added upper-body muscle he put on for this fight.

The 35-year-old native of Tuscaloosa, Alabama started well, jabbing to the body in Rounds 1 and 2, before dropping Fury in Round 3. Wilder weathered Fury’s aggression in Round 4 and blasted him to the canvas twice with big right hands before the bell. Fury, however, landed a good one-two combination just before the bell.

From that point on, Wilder remained game and a threat but was often teetering about the ring from Fury’s clean punches when he wasn’t being leaned and banged on when in close. Fury had the edge in Rounds 6-9 but Wilder kept the atmosphere intense by punching back with gusto. The sloppy but entertaining slugging had the crowd on their feet.

A full, detailed ringside report from Dan Rafael will be posted shortly.