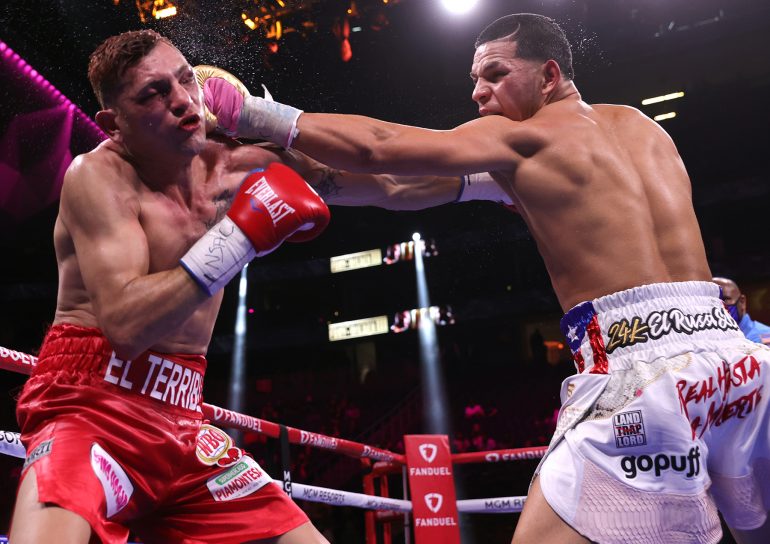 Marcelo Esteban Coceres (L) and Edgar Berlanga (R) exchange punches (Coceres getting the worst of it) during their 10-round super middleweight bout at T-Mobile Arena in Las Vegas. (Photo by Mikey Williams/Top Rank Inc via Getty Images)
09
Oct
by Dan Rafael

LAS VEGAS – Rising super middleweight prospect Edgar Berlanga got knocked down for the first time in the first competitive fight of his career, but he hung on for a unanimous decision win over former world title challenger Marcelo Esteban Coceres on Saturday night at T-Mobile Arena.

In his first scheduled 10-rounder – the final preliminary bout before the start of the Tyson Fury-Deontay Wilder III pay-per-view portion of the card – Berlanga survived a ninth-round knockdown and won 96-93 on all three scorecards.

The fight was the first of a four-fight plan in place for Berlanga, one of boxing’s best prospects and most exciting punchers, as long as he keeps winning. With Coceres vanquished, Berlanga is due to next fight in the co-feature slot on the Vasiliy Lomachenko’s next fight on December 11 at the Hulu Theater at Madison Square Garden in New York.

If all goes well for Berlanga that night, he would have his first fight in Puerto Rico in March and then return to headline a card at Madison Square Garden on the weekend of the annual Puerto Rican Day parade in New York.

Berlanga, who began his career with 16 consecutive first-round knockouts before going the eight-round distance in his last fight in April, did not come close to starting another first-round knockout streak as Coceres burned a lot of energy bouncing around and moving side to side.

Berlanga went forward looking to land his money right hand and although he landed several rights in the early rounds he didn’t land his best one clean.

Coceres landed two hard right hands that bent Berlanga backwards in the sixth round that got the crowd excited, but Berlanga rebounded quickly.

Berlanga was having problems in the late going and they got worse in the ninth round when Coceres, whose right eye was badly swollen, scored a stunning knockdown of Berlanga on a clean counter right hand. It came just before the end of the round and Berlanga got the rest period to recover.

Unheralded junior middleweight Vladimir Hernandez notched a hard-fought upset decision over former unified world titlist Julian “J-Rock” Williams, who was fighting for the first time in the 20 months since he lost his 154-pound belts.
Hernandez, who came on very strong in the final three rounds, won 97-93 and 96-94 on two scorecards while Williams got the nod 96-94 on one card.

Williams (27-3-1, 16 KOs), 31, of Philadelphia, had not fought since losing his belts by upset fifth-round knockout to Jeison Rosario in front of a hometown crowd in January 2020. Since then, Williams healed from various injuries and split and then reunited with longtime trainer Stephen “Breadman” Edwards.

He fought well through the first half of the fight, landing solid right hands and opening a cut across Hernandez’s right eyelid in the first round. He rocked Hernandez with another right hand early in the second round.

By the end the fourth round, Hernandez’s eye was in bad shape and then he was also cut over the left eye by the end of the fifth round. But Hernandez never stropped coming forward and as Williams began to tire, Hernandez took command.

Hernandez (13-4, 6 KOs), 32, of Mexico, closed the eighth round well by forcing Williams to the ropes and landing a combination and he also had Williams in mild trouble in the ninth and 10th round, and him hanging on as the fight came to an end.

Ramirez (8-1, 4 KOs), a 27-year-old southpaw, won a vacant regional title by scores of 99-91, 91-91 and 97-93. It was his eighth consecutive victory following a tremendous upset decision loss in his professional debut.

Against Gonzalez (17-1, 10 KOs), 26, of Puerto Rico, Ramirez feinted, moved and landed sporadic right hooks to back up Gonzalez, but much of the fight was spent with the two in the middle of the ring staring at each other rather than punching.

Carrington, who won 40-36 on all three scorecards, was quicker and a heavier puncher but Cantu hung in there and was aggressive. But Carrington was poised and landed the sharper, cleaner shots, including when he closed the fight by landing several good right hands in the final seconds.

Faust rocked Marshall right hand that snapped his head back right at the bell ending the second round. In the third round, Faust landed a left-right combination to the head that send Marshall to the canvas. He beat the count, but was in no condition to continue and referee Robert Hoyle stopped the fight at 1 minute, 49 seconds.