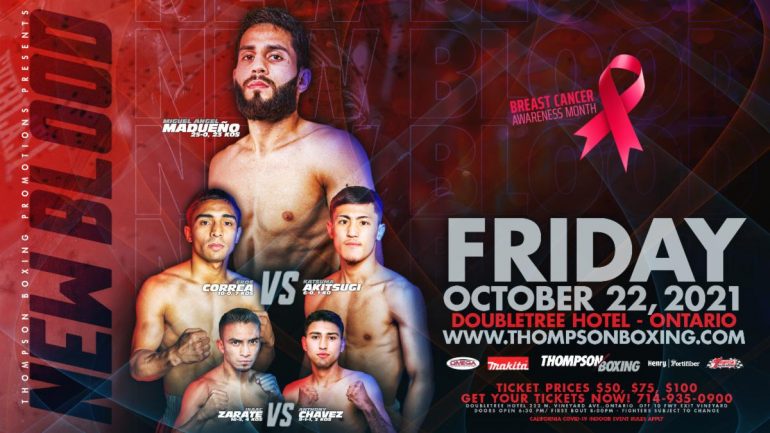 Hard-hitting junior welterweight prospect Miguel Madueno hopes to continue building off the momentum from an impressive victory in his last fight.

Madueno will face veteran Jose Luis Rodriguez on October 22, Thompson Boxing Promotions announced on Tuesday. The eight-round bout will take place at the Doubletree Hotel in Ontario, California and will headline a six-bout ‘New Blood’ card that will stream live on their YouTube and Facebook pages (11 p.m. ET/ 8 p.m. PT).

The October 22 card marks Thompson Boxing’s return to Ontario since mid-February of last year. Because of the pandemic, the Southern California-based company staged fight cards inside the Omega Products International warehouse in nearby Corona, beginning in July of last year. The ‘3.2.1 Boxing’ cards were three-fight cards featuring prospects promoted by Thompson Boxing.

Madueno (25-0, 23 knockouts), who is originally from Guasave, Mexico and now resides in Orange, California, appeared on two Thompson Boxing cards held in Corona. In his Thompson Boxing debut on April 18, Madueno stopped Berman Aguilar with a body shot in the opening round. Almost four months later, Madueno stopped Manuel Martinez, also in the first round.

In his last bout on September 14, Madueno overcame a slow start to score an impressive knockout win over former prospect Sonny Fredrickson.

The 22-year-old has been fortunate to fight often throughout this year and hopes to finish 2021 in impressive form.

“It feels great to be so active after fighting only a couple of times last year,” said Madueno. “This will be my fourth fight of 2021 and I want to make it a memorable outing. I want to take the momentum from my fight with Fredrickson into this bout. Rodriguez is a worthy opponent who has gone the distance with a lot of good fighters. I want to stop him and send a message to the entire lightweight division.”

Rodriguez (25-14-1, 13 KOs), who resides in Monterrey, Mexico, last fought on December 20, losing to unbeaten Ruben Torres, who is also promoted by Thompson Boxing. He is winless in his last three bouts after winning three of his last four.

In his last bout on November 14, Correa faced Henry Arredondo, another unbeaten fighter, defeating him by majority decision.

Akitsugi (6-0, 1 KO), who is originally from Wakayama, Japan and now resides in Hollywood, California, defeated gatekeeper Diuhl Olguin by unanimous decision is his last bout on August 14.