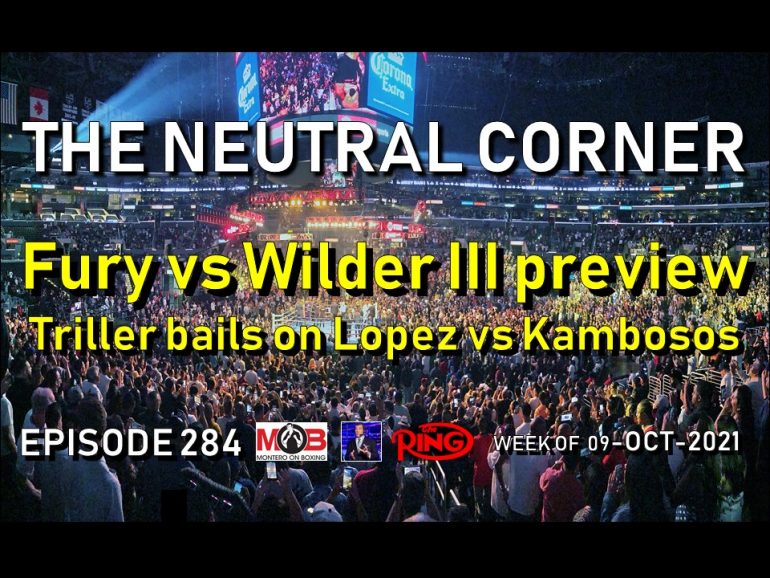 On episode 284 of The Neutral Corner boxing podcast, host Michael Montero gave some quick thoughts on the retirement of Manny Pacquiao. The Filipino legend officially announced that he will hang up his gloves to focus on his political career going forward. Should Pacquiao (62-8-2, 39 knockouts) keep his word and remain retired, he’ll be a unanimous choice for the International Boxing Hall of Fame (IBHOF) in his first year of eligibility.

In other news, Triller has bailed on the lightweight title fight between champion Teofimo Lopez and IBF mandatory challenger George Kambosos. Back in February, Triller made headlines when they submitted a massive purse bid of more than $6M to secure the fight. The second-highest bid was from Matchroom Boxing for about $3.5M. Top Rank, who promotes the champion, bid just over $2.3M.

The fight, which was originally set to take place earlier this summer, has been rescheduled multiple times for different reasons. Triller executives have finally had enough, and recently submitted a request to the IBF to return their 20% purse bid deposit ($1.2M) and remove Kambosos from his mandatory position so they can pursue a different opponent for Lopez.

The only fight of note last week occurred Friday in Milan, Italy. Undefeated super middleweight prospect Daniele Scardina improved to 20-0 (16 KOs) with a stoppage win over Juergen Doberstein, of Germany. The fight headlined a Matchroom Boxing card that was streamed live on DAZN.

If Wilder doesn’t get Fury out of there in the first three rounds, it’s going to be a distance fight,” said CJ in Las Vegas. “If he comes into this fight in the typical good condition he usually is, he’ll find a way to go the distance and lose competitively.”

“The Lopez vs Kambosos fight has gone to hell,” said Nacho from California. “Kambosos lost that $2M pay day. There’s no guarantee he’s ever going to see that kind of money again. I think him and his team look like a bunch of bozos.”

“I scored the Joshua vs Usyk fight 116-112 for Usyk,” said Rich from the UK. “It’s a shame that so many fans have been talking about what Joshua did wrong, instead of what Usyk did right. What he did was unbelievable.”

“Oleksandr Usyk is the pound for pound best fighter in all of boxing,” said Kevin from Illinois. “It boggles my mind how anybody could put any fighter above him. Canelo Alvarez, his biggest win was a gift decision. He’s got the entire boxing industry in his back pocket.”