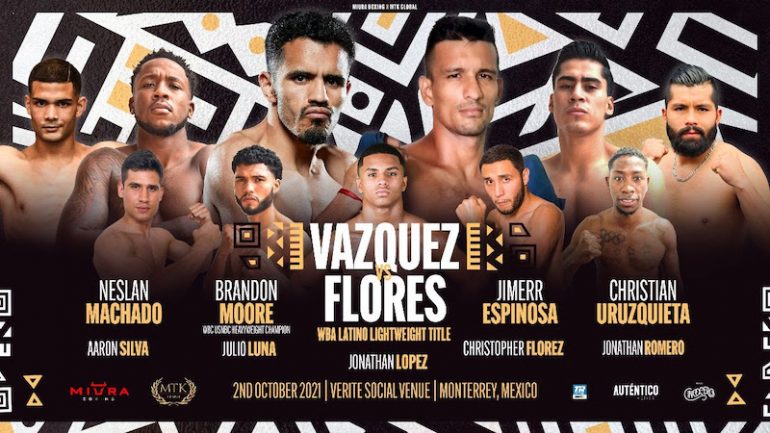 In the first round, Vazquez appeared to be stunned on a couple of occasions by Flores’ right hooks from his southpaw stance and the visiting fighter won the round. Vazquez recovered slowly in the second round, still working hard to figure out Flores’ stance and mobility but landing the most telling punches nonetheless. In the third, an accidental clash of heads caused a cut on Flores’ left eyebrow and he held Vazquez in a tight headlock while waiting for the referee to force a separation. The ringside physician checked on him and the fight continued, with Flores seizing the moment to land crisper punches and take the round by the slimmest of margins.

In the fourth, Vazquez took control of the fight and managed to score more often with more power to edge the round. Vazquez took the fifth episode as well by managing the spaces and distances in the ring and landed several punches that, along with what appeared to be an intentional headbutt, managed to wear Flores down a bit further.

In the sixth round, Vazquez stormed out of the gates, sensing a good moment, but Flores took the challenge and met him in the center of the ring while dropping a few bombs of his own. The seventh saw Vazquez being pushed back by Flores, who found new strength after suffering the effects of the cut. A great uppercut in the early going of the eighth round stunned Vazquez and gave Flores an advantage that he would hold until the end of the round.

Flores came out throwing bombs in the ninth, determined to take control of the home stretch and managed to land the crisper punches. Vazquez walked the ring smartly in the final round, working behind the jab and keeping Flores at bay while Flores’ cut kept bleeding.

Also in the undercard, undefeated Mexico City-based prospect Jimerr Espinosa improved to 11-0 (10 KOs) with a fifth round stoppage of Jose Luis Melendez (14-8-2, 8 KOs) in a junior welterweight bout scheduled for eight rounds. Melendez managed to make it an even fight during the first stretch but as soon as Espinosa’s power manifested itself, it was all over.

In an entertaining heavyweight attraction, Brandon “Más” Moore improved to 10-0 (6 KOs) with a first round knockout over Jesus Angel Nerio (15-10-1, 6 KOs). Nerio was getting beaten around the ring by Moore and had already suffered a knockdown that was erroneously ruled a slip, when he suddenly dropped his guard and walked toward his corner. Apparently the timekeeper used some kind of whistle or bell to announce the 10-second mark instead of the usual castanets and Nerio thought the round was over. Moore seized the opportunity and knocked him down as the actual bell sounded and Nerio was counted out.