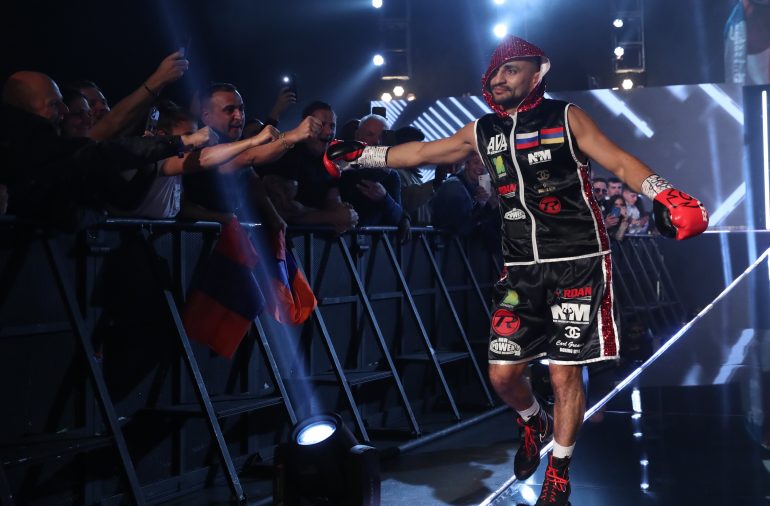 Having his first fight since dismantling Josh Kelly, David Avanesyan improved to 28-3-1 (16) with an impressive two-round win over England’s Liam Taylor.

Avanesyan, victorious in the bill-topper at London’s Wembley Arena, is on the cusp of The Ring’s top 10 welterweight ratings and he’s a beast who will take some stopping in this form.

Taylor tried to keep the favourite honest with hard straight shots in the opener but he was dropped by a short right hook with 15 seconds to go in the round as Avanesyan swarmed forwards behind hooks from both hands.

Taylor tried to fight fire with fire in Round 2 and both scored, even if Avanesyan remained in the ascendency. Liam just couldn’t keep the buoyant Avanesyan off him. The U.K.-based Russian was relentless and it’s going to take a huge puncher to put a dent in him.

When the Carl Greaves-trained Avanesyan broke through with a left hook-right hook and another left hook, referee Mark Lyson quickly intervened before Taylor could take any further damage.

On the undercard, cruiserweight Richard Riakporhe improved to 10-0 with an eight-round points win over Poland’s Krzysztof Twardowski.

The visitor was down in the last as Riakporhe, having his first fight in almost two years, shed rust winning 79-72. Twardowski is now 9-3.

Chris Eubank Jr. had been set to headline the bill but late replacement Anatoli Muratov was denied permission to box by the British Boxing Board of Control on medical grounds earlier in the day.