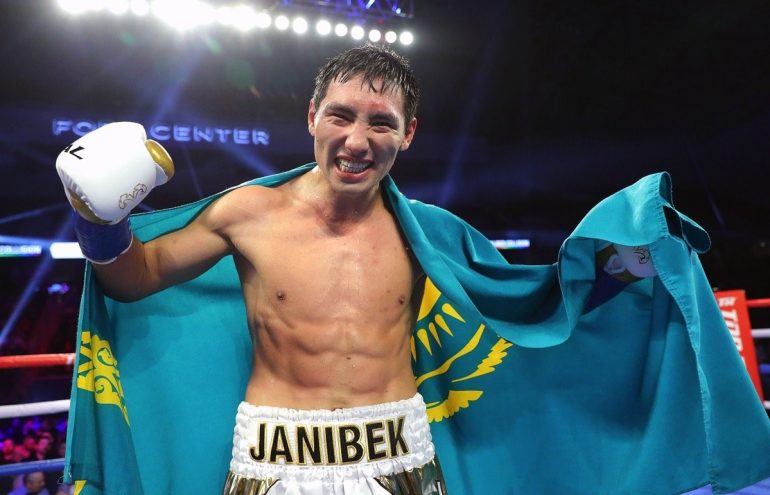 Rising middleweight contender Janibek Alimkhanuly will take on a former contender for his second consecutive fight.

Alimkhanuly, ranked No. 7 at 160 pounds by The Ring, will face France’s Hassan N’Dam in a 10-round contest, Friday, November 5, from Virgin Hotels in Las Vegas. The bout will serve as chief support to the unified female junior lightweight title bout on ESPN+, featuring Mikaela Mayer versus Maiva Hamadouche.

The southpaw Alimkhanuly (10-0, 6 knockouts), a Kazakhstan native based in Oxnard, California, dominated and dropped Rob Brant en route to an eighth round stoppage on June 26 in Las Vegas. The triumph marked the 28-year-old’s fourth straight knockout win. He made his pro debut in October 2016 following a decorated amateur career that culminated with an appearance at the 2016 Olympics, in which he lost in the quarterfinals.

N’Dam, who trains out of Monte Carlo, Monaco, has thrice come up short in his efforts to become a major titleholder.

The former two-time Olympian from Cameroon was outpointed by former titlist Peter Quillin in defense the WBO middleweight title in October 2012, handily defeated by David Lemieux for the vacant IBF 160-pound title in June 2015 and was brutally stopped by Callum Smith in an attempt to snag The Ring and WBA super middleweight titles in June 2019. To top it all off, the 37-year-old has fought just once in the past 21 months and has lost three of his last five fights. He is coming off an eight-round points win over journeyman Gabor Gorbics on July 2.

N’Dam also briefly flirted with the idea of becoming a mixed-martial arts fighter. In June 2020, he signed a deal with ARES FC to make the formal transition to the cage but COVID-19 nixed his plans. Following a failed attempt to lure Jake Paul into the cage, N’Dam ran back to the sweet science with his sights set on fighting for another title.