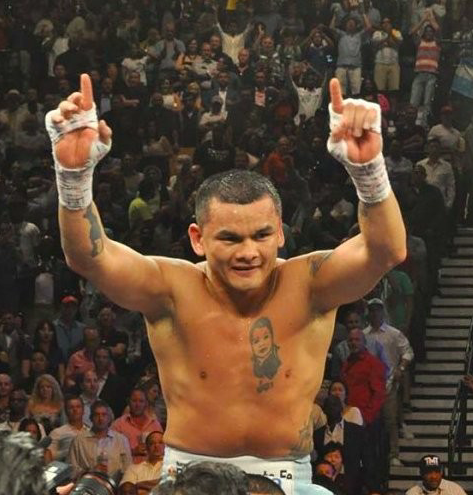 In his most memorable performance as a fighter, Marcos Maidana is still remembered as the man who landed the most punches against Floyd Mayweather during a prizefight, connecting on 221 punches (for a measly 24% of his 828 total punches, though) in their first meeting.

After a few years of gaining weight, indulging in a lavish lifestyle, threatening to sue his former handler and then announcing a comeback that would never materialize (among other controversies), Maidana finally found a second life in boxing as the head of Chino Maidana Promotions in his native Argentina. 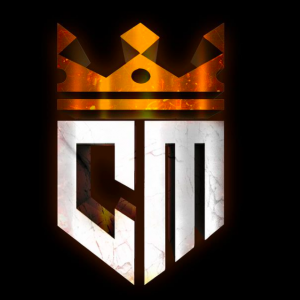 No big news there, at first sight. Former fighters becoming promoters are a common occurrence. But Maidana’s entry on the scene may prove to be as consequential and explosive as the excitement that followed his wins over Victor Ortiz and Adrien Broner back in the day, at least in the always active and talent-laden but stagnant Argentine scene.

“You wanted a fight? We’ll give you a war!” is the catchphrase yelled by Maidana in his promotional videos and echoed by ring announcer Gustavo ‘La Hiena’ Leguiza before every Maidana Promotions fight, and he’s not talking only about the action inside the ring. Rather, it could easily be interpreted as Maidana’s war cry against a boxing establishment that forced him to take his act abroad back in his heyday and that is still operating under the worst habits of mid-20th century boxing.

Maidana hopes to be the one to break the cycle.

“We aim to change the model, the way of doing things,” said Maidana, age 38. “I learned a lot of things from (my former managers’) mistakes, and I am not going to make those mistakes. I will do things as they have to be done. We are going to teach them how a boxer is supposed to be handled.”

What sounds like a daunting task may not be as hard as it seems. The bar is pretty low in today’s Argentine boxing scene. Two promoters have been found guilty in several lawsuits of having either embezzled funds from fighters or willfully underpaying them. Both of them, O.R. Promotions’ Osvaldo Rivero and Argentina Promotions’ Mario Margossian, who was successfully sued by Maidana and found to have “misdirected” close to half a million US dollars of the fighter’s money, work closely with the local Argentine Boxing Federation (FAB, in its Spanish acronym). The word “closely,” actually, is an understatement, since all of them are under an umbrella contract with local TV network TyC Sports in which they all (including the FAB) split the fees from the televised cards in an undisclosed percentage. In spite of having been found guilty of fraudulent activities, neither one of those promoters has been suspended, and they continue doing business.

As part of that ongoing scheme, bogus titles, like “Latino Silver interim belts,” for example, get sanctioned with the help of FAB personnel. This common occurrence is a boxing model in which everyone, promoters, sanctioning bodies, TV networks and even the FAB, files an invoice and gets paid first, and boxers get the leftovers.

The current options for fighters trying to break away from this model are very few. There is a guy going around gyms hiring fighters to fight abroad in countries with spotty regulations, with no contracts or any guarantees other than a wad of cash handed over at the end of each fight. There is a parallel organization called the WPC (World Pugilism Commission, yes…) staging backroom fights in gyms that serve as mere “resume fillers” for fighters whose licenses have been suspended by the FAB. And for those who are good enough in the ring and smart enough outside of it there is always the prospect of relocating abroad.

In this scenario, doing a better job shouldn’t be too hard. And equipped with the experience he claims to have, Maidana aims to be the one to do things differently. Being a former fighter who still enjoys an enormous level of popularity and trust among fans, he may finally carry enough weight to break into a scene where others have either failed to disrupt the status quo or simply gave up.

He is not alone in his effort, and he has quite an unusual sidekick in this endeavor.

“Due to the pandemic, we had to set that project aside, but we strengthened our partnership instead,” said former kickboxer Jorge “Acero” Cali, who was planning to fight his now partner Marcos “Chino” Maidana earlier in 2020 when the COVID-19 restrictions kicked in, in a crossover bout a la Mayweather-McGregor. 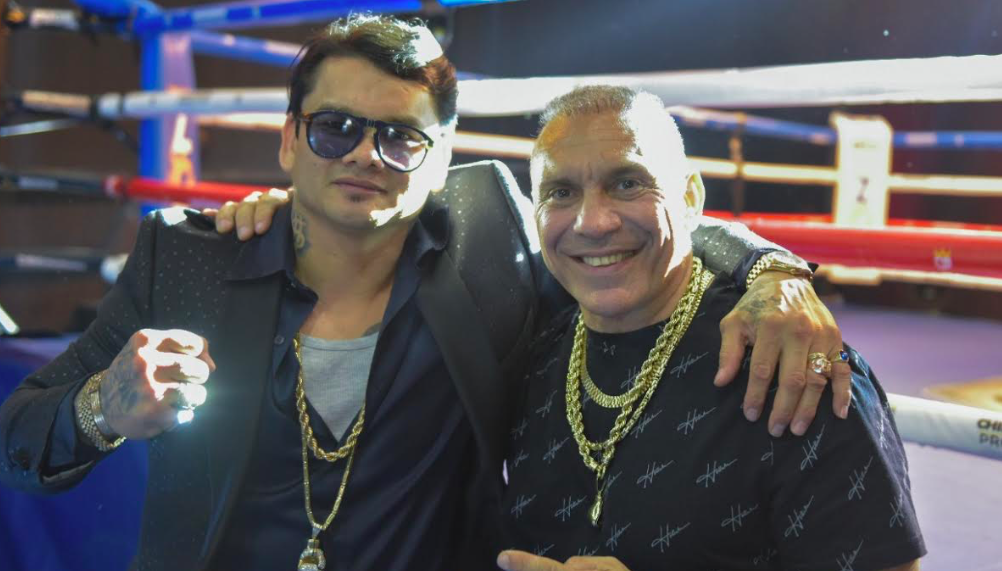 Chino and Cali, looking tight, and in sync.

The old adage of “if you can’t fight them, join them” couldn’t have a better example. Cali, who never boxed professionally, is now part of a new company that keeps attracting new talents as well as disgruntled and disenchanted fighters from all over the country.

“This is a new model, an open-door model,” said Cali. “Fighters come to us, we don’t go out looking for them. Our best contract is our word. We had contracts with fighters who left us, and we allowed them to leave. We want everyone to be part of this, and we want the best version of our boxing. We are looking forward to have the best fights out there, and start doing all those mythical fights that were commonplace in our time.”

Good local matchups and “neighborhood brawls” were the norm through most of Argentina’s rich local boxing history, but the current model has discouraged them. It has gotten so bad, that the FAB felt compelled to step in and become a promoter (as if there weren’t enough conflicts of interest floating around already), doing “FAB Cards” in order to force the best to fight the best.

The third man in the company masthead plans to change that too.

“We want to up the ante in Argentine boxing, to have good fights at the national level, and to showcase good prospects at the international level,” says Gustavo ‘Pileta’ Gomez, Maidana’s cousin and an inseparable companion and confidant for the former champ. “We are very happy with the way things are going, and I believe we’re going to do great things in boxing because we have a lot to give, a lot of experience and we know what we are doing in boxing.” 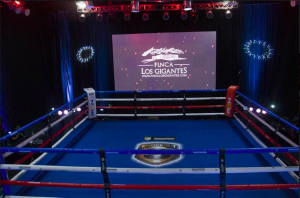 For now, Maidana Promotions has two platforms in which they can develop their fighters. They did five cards with ESPN that were broadcasted internationally as part of their ESPN Knockout series, and now they are working weekly with Channel 9, a broadcast network that produced an old classic like “Nocaut 9” back in the ‘80s where every relevant Argentine fighter was featured weekly.

Maidana aims to continue that tradition and build upon that, and so far he has succeeded. And he was aided by a massive exodus of fighters who see in his company a viable alternative to the current situation.

A number of names ranging from former champions to current contenders and recent Olympic graduates came knocking on Maidana’s door, and have been seen hovering around his weigh-ins looking for a contract and other perks, such as the large bonuses imprinted on cardboard checks given to the best fighter of the night, a novelty in the country.

With all this, Maidana is surely making his competitors look bad, and given the fact that the FAB is in business (literally) with them, some kind of blowback should be at least expected. There have been fights being stopped too early on Maidana’s cards by overzealous referees, or scorecards going against the “house fighter” in some of his cards as well, and other facts that conspiracy theorists point to when asked to produce proof about the potential revenge by the establishment looking to disrupt his new business model.

Cali shrugs off this notion.

“Obstacles? When you move new terrain, we find soft and hard terrain,” says the bulky former MMA fighter and celebrity bodyguard. “We had roadblocks just like anyone trying to do something new, but I laugh at the people who say we can’t get things done. I get a kick out of laughing in their faces.”

Maidana, who punched his way to a welterweight belt and two lucrative bouts against Mayweather and finished his career with a record of 35-5 with 31 KOs, knows a thing or two about not giving up in the face of adversity. (Click here to read Maidana’s take on who of his foes impressed him the most.) He understands full well that he would have never reached the heights he did if he had stayed signed within the Argentine way of doing things, and now he is, so far, putting his money where his mouth is.

The lack of support that other fighters denounce routinely is not the case with Maidana’s operation. He has moved his operative base to Las Clavelinas, a sprawling compound controlled by a local labor union, where he hosts fighters traveling from all over Argentina, sometimes with their families as well, and where he has installed a large gym for them to train. Due to the restrictions caused by the COVID-19 pandemic, the gym is transformed during the weekends in the actual venue for his televised fights, giving him the advantage of literally having his entire operation under one roof.

Still, that is only the beginning. If he wants to best his competitors he will need much more than. He will need to apply the all-out style he used in the ring to not only outscore, but to outmuscle the competition.

If his fighting style is a harbinger of things to come, then the road is well laid ahead of him. And his goal of inspiring the next generation of Argentine power punchers in his mold by yelling out his war chant on TV every week may one day come to fruition.

That, by the way, is a kind of inspiration that he never had the chance to receive, from anyone.

“I didn’t have a TV set growing up,” said Maidana, who grew up in a family of farmhands in the Argentine plains. “The first fight I saw was when I was 15 or 16. I liked it, but back then I didn’t know what boxing was. After that, I started boxing, and here I am.”

Let’s hope the next ‘Chino’ is out there watching him now on TV and being inspired by this leg of his journey just as much as he could have felt inspired by watching him fight in the ring in his best years.