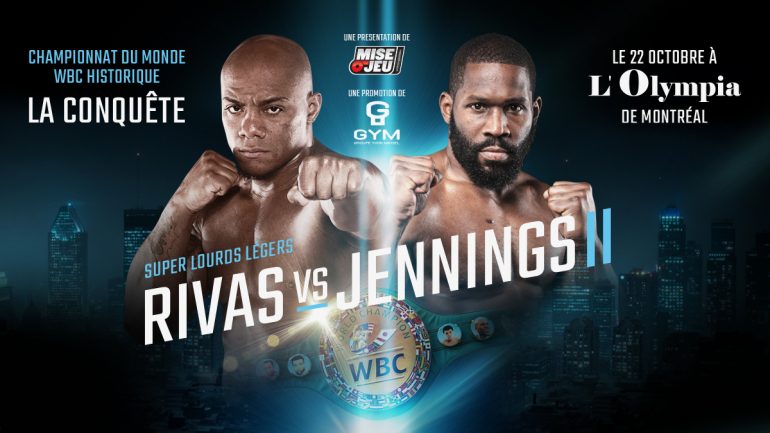 Earlier this week, Canadian promoter Yvon Michel came out on Twitter that the first WBC bridgerweight title fight between Colombian Oscar “Kaboom” Rivas and Bryant Jennings on October 22 at the Olympia Theatre of Montreal was off.

Michel explained in his social media post that “Team Jennings informed us this weekend that Bryant refused to get vaccinated as well as refused Canada’s rule of admission for non-vaccinated travelers, even though it was clear in the contract it was necessary.” And in another Tweet, “We already found a replacement, a ranked fighter from WBC’s bridgerweight division. @kaboom_rivas will fight for the vacant WBC bridgerweight title on October 22nd at Olympia de Montreal. More details will come this week.”

Jennings (24-4, 14 knockouts) has not fought in two years, since going the distance in a decision loss to heavyweight contender Joe Joyce in 12 in July 2019. Jennings had previously lost to Rivas (27-1, 19 KOs) in a very competitive fight in January 2019. Rivas, 34, later lost by unanimous decision to Dillian Whyte in July 2019.

On Tuesday, December 8, 2020, WBC president Mauricio Sulaiman unveiled the “Bridgerweight” division, with the expressed purpose of smaller heavyweights having a chance to compete against fighters of similar size, placing the class between 200 and 224. Many smaller heavyweights, like newly crowned IBF/WBA/WBO heavyweight titlist Oleksandr Usyk refused inclusion in the WBC’s inaugural bridgerweight rankings, along with former WBC heavyweight titlist Deontay Wilder (Usyk weighed 221½ to Anthony Joshua’s 240 for their title fight last Saturday).

So, the first bridgerweight title fight was supposed to take place between Rivas, the WBC’s No. 1-ranked contender, and Jennings, the No. 3-ranked bridgerweight contender.

As of last weekend, it’s not.

Michel explains his side. By Canadian law, Jennings is considered an essential worker entering the country. All essential workers entering Canada must either undergo a 14-day quarantine or be vaccinated for COVID-19.

Jennings refuses to be vaccinated.

Jennings, from Philadelphia, wanted his side stated.

“The fight is off and I wanted to talk to get this out,” Jennings said. “The fight is over and Yvon Michel said that ‘due to my anti-vaccine beliefs,’ I threw away the fight. I wanted an alternative. What they wanted was 14 days of self-quarantine, where I was stuck in a room without anyone around, where I couldn’t conduct proper training or have access to a trainer, and I wasn’t about to go into a 12-round world championship without being prepared. That wasn’t going to work.

“I was supposed to arrive October 7 and go into 14 days of quarantine, and then I would get out of this dark room on the day of the weight-in. No, no, no way. Fighters go through a lot when there is a build-up for a fight. You go through mental stress, physical stress, you go through everything. Plus, I was losing money training.

“I was just looking for an opportunity. I’ll fight bridgerweight, heavyweight, it doesn’t matter to me. I took the fight hoping to get a world championship. But it has to be an even playing field. I appreciate the opportunity that the WBC gave me with this, and this fight has already been cancelled twice. The fight was going to take place in June, and the other date was September 22.

“I was hoping to get some type of reimbursement for my training expenses. I feel really played in this situation, because of my vaccination beliefs. I’m healthy. I’m a vegan. I live a healthy lifestyle. I train hard and I’m damned healthy for 37 years old.”

Michel said that Jennings would have been allowed to train with his team in a large facility while under quarantine.

Jennings said he tried to make an appeal to Sulaiman in trying to sell the bridgerweight divison by putting a proper face on the new weight class. He wanted to be that face.

“Boxing is on its deathbed, with YouTubers getting more money to fight than real fighters, think about it,” said Jennings, who’s been training for Rivas since April. “This is a new weight division that needs to be legitimized with legitimate fighters. I’m a legitimate fighter. I fought world champions (Jennings gave world heavyweight champion Wladimir Klitschko a battle in April 2015).

Jennings returned back to Philadelphia from Las Vegas, where he was training, on Sunday, September 26.

“I was training for this fight, I was ready, but I wanted to tell my version of what happened,” Jennings said. “This fight could have happened. It is, but I’m not going to be a part of it.”