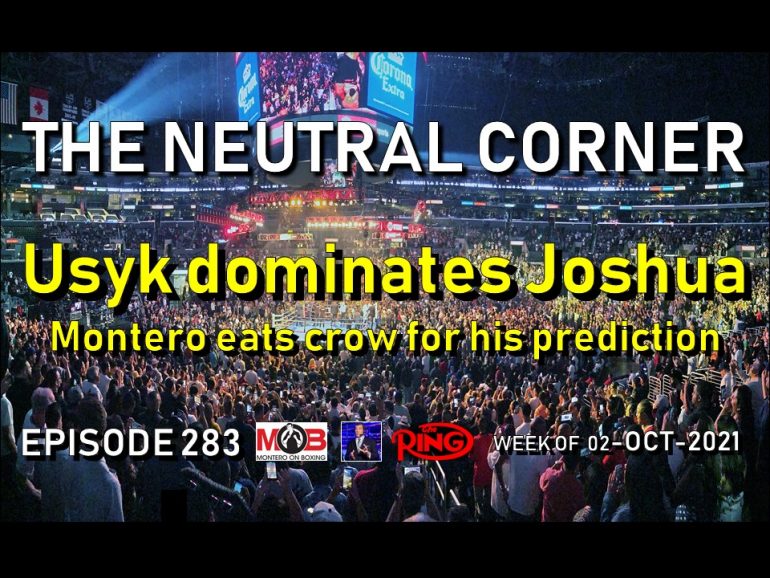 Usyk, the unanimous 2018 Fighter of the Year and former undisputed cruiserweight champion, added three heavyweight world titles to his collection in London, the same town he won his Olympic gold medal in 2012. Montero argued that Usyk is already the greatest cruiserweight of all time, giving a statistical “head to head” between him and Evander Holyfield, and his pick for 2021 Fighter of the Year.

Many TNC listeners, including several who picked Usyk to win, called into the show to give their thoughts. It was a great episode that ran for two hours.

More than 65,000 fans attended the Joshua vs Usyk card at The Tottenham Hotspur Stadium in London Saturday night. The Ukrainian, giving up around twenty pounds in weight and several inches in height and reach, put on a career-best performance in the main event from Matchroom Boxing. The card was streamed on DAZN.

Joshua had his best moments in the sixth round, landing several hard punches that visibly stunned Usyk (19-0, 13 knockouts). The fight appeared to be even about halfway through, but the former cruiserweight champ found a new level in the second half and coasted in the late rounds. In fact, Usyk had Joshua (24-2, 22 KOs) hurt against the ropes in the final seconds of the bout.

There was a rematch clause in the contract for this fight, which Team Joshua plans to force. Get ready to watch these two fight again in early 2022.

“I picked Usyk,” said Hamed. “It took Joshua seven or eight rounds to figure out Joseph Parker, and all he did was backpedal and flick out the jab. Usyk has a much better ring IQ and skills than Parker. I think he is no less than number two pound for pound right now.”

“I agree (with Montero’s take) that Usyk is the greatest cruiserweight ever,” said Juan Valverde. “For those of us who started watching boxing when Evander Holyfield was champ, I remember that the cruiserweight division was a joke. Nobody took it seriously.”

“I would still name Canelo as the 2021 Fighter of the Year,” said Andrew, “but I don’t think you’re crazy for giving it to Usyk. I try to put a premium on a fighter’s activity, and Canelo will fight three times this year. It looks like Usyk will only fight once.”

“Anthony Joshua’s best weapon is the uppercut and Oleksandr Usyk took that weapon away,” said Thad. “AJ landed a couple in the eighth round but Usyk adjusted and came out pretty much unscathed. He closed the show.”

“I’d like to add my two cents on that tweet from Gervonta Davis about Usyk,” said Nacho. “Coming from the dude who won three “regular” titles against Barrios, Gamboa and Santa Cruz, I’m supposed to be impressed? Gervonta should not be throwing stones at anybody.”

“I called the Joshua vs Usyk fight exactly the way it went down,” said Jacob Rodriguez. “I knew that stylistically, this was going to be an ugly fight for Joshua. He struggles with slick boxers. Honestly, I don’t know if the rematch is going to be any different.”

Sanch, who flew from California to London to attend the big heavyweight showdown in person, shared his experiences. “Wonderful hospitality from the people. London is a hell of a city. The stadium in Tottenham was beautiful, and full of real fight fans. It was nice to be around fight fans. Yes, they were mostly rooting for AJ, but they just wanted to see a good scrap. It made me envious because so many American fans are entitled and think the world revolves around them.”

“I like Anthony Joshua, I think he’s a competitive athlete,” said Kris, “but I just feel that deep down inside, he doesn’t like to fight. When you’re fighting, you have to have that edge where you bite down. I think Joshua likes the competition, testing his skills, but not to fight.”

“The fight went exactly like I thought it was going to go,” said E’san, who picked Usyk. “The late rounds is when Joshua gases. Usyk has mobility and Joshua is too stiff at times, he had the wrong game plan.”

“I favored Joshua just because he’s the establishment fighter,” said Keith. “I figured if he kept the fight close, we might see some funny business on the scorecards. I’m kind of surprised there wasn’t. It was good. I’m a Joshua fan and I like Usyk as well. They ‘ll fight anyone and they seem like good overall ambassadors of the sport.”