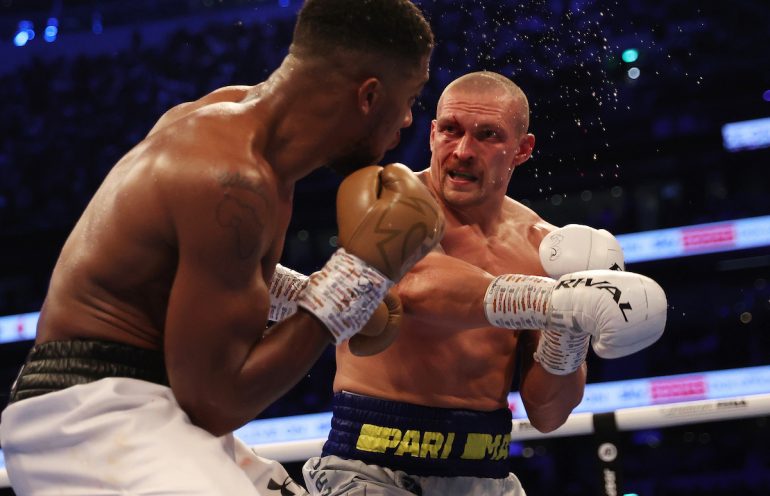 Is Oleksandr the best heavyweight, the best Road Warrior and P4P No. 1? Photo by Mark Robinson/ Matchroom Boxing
26
Sep
by Tom Gray

LONDON – So, it’s the morning after the night before.

First of all, the atmosphere inside the Tottenham Hotspur Stadium last night will always stay with me. By the time the venue had filled to capacity, which coincided with Lawrence Okolie’s third-round knockout of Dilan Prasovic in a WBO cruiserweight title defense, you could scarcely hear yourself think. There was 67,000 fans, soccer-style chanting, dancing, beer flying through the air and spine-tingling renditions of “Hey Jude” and – obviously – “Sweet Caroline.”

It was a magnificent event!

When the Joshua-Usyk fight was first announced, I found it very difficult to pick a winner. I ultimately settled on Joshua winning a decision because I felt that trainer Robert McCracken could formulate a game plan that would nullify Usyk’s speed and movement. The saying goes that a jab counters speed and Joshua’s lead hand is a superb weapon that would be aided by a four-inch reach advantage.

But regardless of my official pick, I was never confident. I continually asked myself: What does Joshua have that Usyk hasn’t seen before? After all, the challenger had taken part in 350 amateur fights, claiming gold at both the 2011 World Championships and the 2012 London Olympics. He then competed in the World Series of Boxing and won all six fights, two of them by stoppage. And if that’s not enough, he was the former undisputed cruiserweight champion of the world.

Would size, power and a great jab be enough to rattle this guy?

Well, we got our answer. 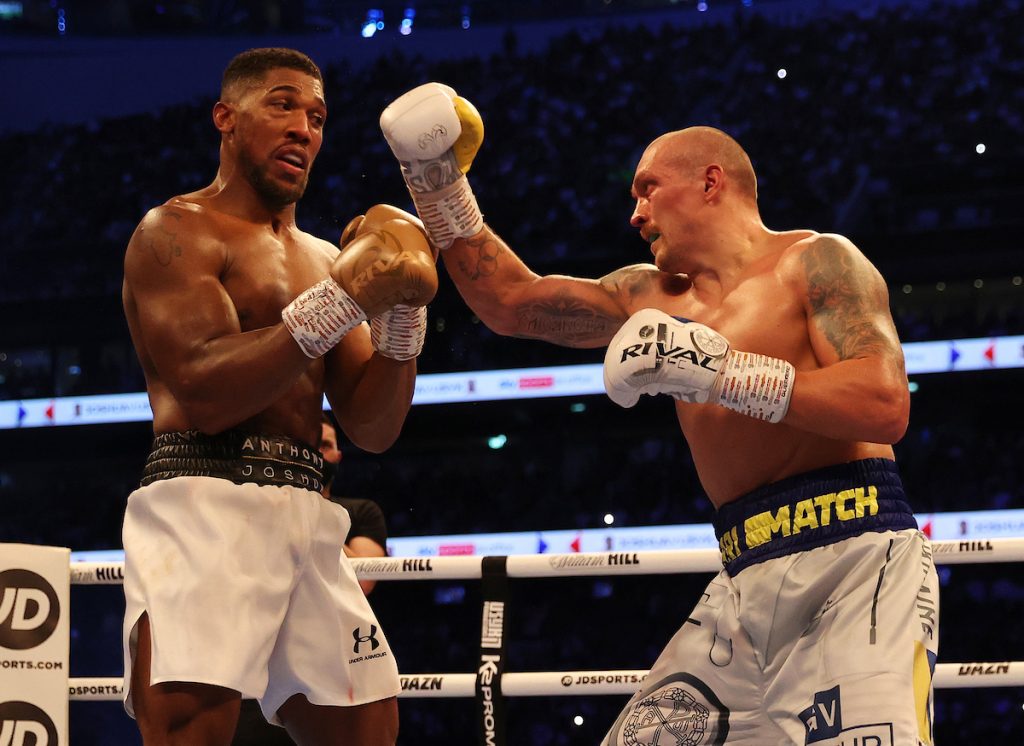 There were three moments in the fight that were standout for me. Firstly, Usyk came out to stamp his authority in Round 1, scoring hard and fast with the left hand down the pipe. Three perfectly delivered power shots struck Joshua in the face and you could literally see the champion’s eyes widen from ringside. Usyk was determined to get respect from the bigger and more powerful man and this early assault was by design. The tactic actually reminded of Muhammad Ali launching a string of risky right leads at George Foreman in the first round of The Rumble in the Jungle. “Oh, I can’t hit? Have some of this!”

In the sixth round Joshua nailed Usyk with a flush straight right that had an immediate effect. From a 240-pound man, wearing 12oz gloves, that punch must have felt like being bashed in the face with a telegraph pole. Usyk lost that round on my card, and his head would have have been buzzing when he returned to his corner. It was a fight or flight moment for the challenger. What would he do? Well, instead of going on the defensive, the Ukrainian maestro crossed himself at the start of the seventh, looked skyward in prayer and won the round easily on clean, effective punching. It was yet another message to the bigger man: “I took your best and I’m going nowhere!”

By this point anyone scoring the contest without an agenda knew that the defending champ needed a knockout to win. Usyk knew it, too, and could have used his feet to stay clear of danger. That’s just not the way he’s built. Aware that Joshua was softened up after sustaining 11 rounds of punishment, the challenger could now take the risk of punching with him. He answered every exchange and came close to producing a dramatic stoppage in the closing seconds. Joshua required two minutes on his stool following the final bell, whereas Usyk, despite sporting some facial injuries, looked like he could have completed the 15-round distance with ease. 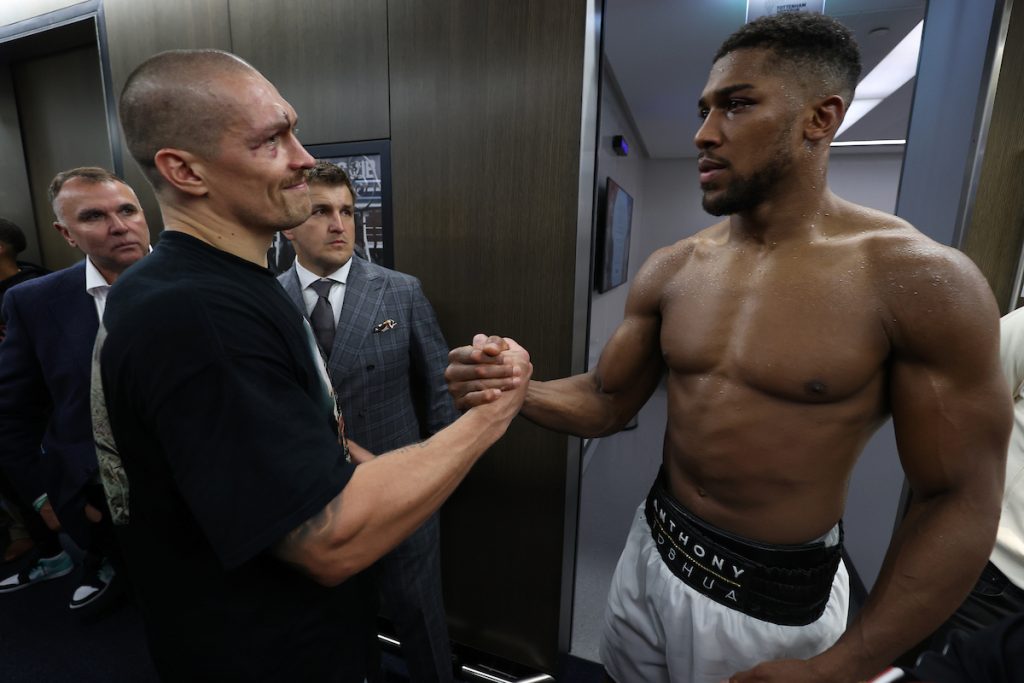 At 6-foot-3 and 220 pounds, what we have now is a heavyweight who is almost identical – dimension-wise and weight-wise –  to prime versions of Muhammad Ali, Larry Holmes and Evander Holyfield. What those smaller champions lacked in comparison to modern day behemoths like Wladimir Klitschko and Joshua, they more than made up for with speed, mobility, pace, technical craft and punch variety. And their gas tanks were beyond reproach.

Usyk has all of those attributes plus he’s a lefty.

Joshua should be commended for accepting the challenge because he didn’t have to take this fight. Would he have been any less the superstar if he’d vacated the WBO title and let Usyk contest the vacant strap against Joe Joyce? No! Had Joshua gone in a different direction, a select group of fight fans may have crucified him on social media, but any scandal would have blown over in a week or so. Matchroom promoter Eddie Hearn suggested at the post-fight press conference that, in hindsight, avoiding Usyk would have been smart, but he was quick to point out that Joshua is not cut that way.

Full credit to the former champion for always testing himself.

Can Joshua turn it around?

Holyfield was clearly outpointed by Riddick Bowe in November 1992 and gained revenge the following year by adopting a smarter and more layered game plan. “The Real Deal” claimed a majority decision over Bowe and became the fourth fighter in history to regain the heavyweight championship (alongside Floyd Patterson, Ali and Tim Witherspoon). Holyfield, a well-rounded and complete pro, accomplished that feat as an underdog, which is the position Joshua will find himself in when the rematch is made.

You can never count him out – he’s overcome adversity before – but this return fight will be next-level dangerous for Joshua. If you weren’t sold on Usyk’s heavyweight potential prior to last night, then you’re certainly sold now.