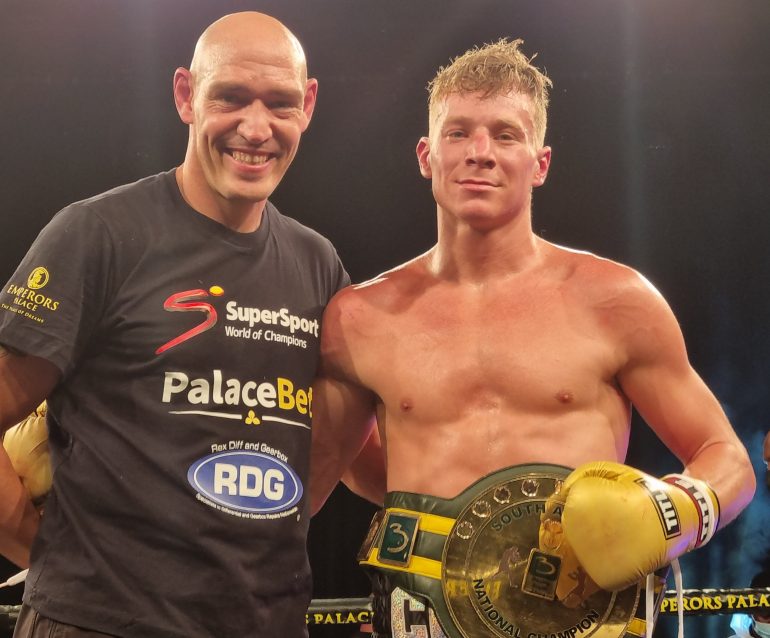 Two hot prospects kept their “0” on Saturday while a third will go back to the drawing board.

Shervantaigh Koopman gave a studied, mature performance, systematically breaking down Simon Dladla before knocking him out in the seventh round to become the new South African junior middleweight champion at Emperors Palace in Kempton Park.

Perhaps tentative from his previous fight that also ended in a knockout loss, Dladla started by circling the ring, staying away from his opponent. Koopman immediately closed the gap and took control with stiff jabs and straight rights to the body. Whenever Dladla tried to clinch, Koopman raked him with hooks to the body.

A stiff right uppercut came into play with Dladla backed to the ropes in the second. Then there was a big left hook that sent the sweat spraying in the third. Dladla, known as an aggressive puncher, stayed on his bicycle.

Despite Dladla landing a good left hook-right hand combination in the fourth, Koopman still dominated the round, varying his attack to head and body.

Koopman came out on a mission in the fifth, banging in hooks to the body followed by a short, chopping overhand right to the head. Dladla once again tried to turn things around with right-left uppercut combination, but Koopman replied with a left hook, sending Dlaldla’s gumshield flying.

It was all Koopman in the sixth. Dladla responded to another right hand in the seventh by landing two hooks to the body and one to the head moments later. It was to be his last stand.

Backed into a corner, a flush right on the chin visibly hurt Dladla and when he tried to clinch, Koopman shook him off. Two follow up rights sent him face first to the canvass where he was counted out by referee Thabo Spampool. The time was 1:42

Cowin Ray also passed his biggest test, stopping a brave Frank Rodrigues in the ninth round to run his record to 7-0 with five stoppages and become the national super middleweight champion.

The first round was tentative with both southpaws feeling each other out. Rodrigues started forging ahead in the second, but it quickly became apparent that Ray had the speed edge, landing a good right hook moments after Rodrigues landed his own.

Ray kept circling around Rodrigues in the third, finding a home for his jab and straight left, ducking under or sidestepping the ineffective attacks of his opponent. A chopping overhand left to the jaw dropped Rodrigues heavily. He got back up to his feet but the follow up attack from Ray had him bleeding from the mouth.

Rodrigues somehow found a way to hang in there while eating jabs, straight lefts and now also a hard left uppercut and right hook that Ray brought into play. By the end of the fourth, he was bleeding from the nose, as well as from a cut under his right eye. Rodrigues landed the odd hook to the body in close but kept absorbing punches as the rounds went by.

It seemed that Ray, who had never been beyond six, was careful to preserve his stamina or maybe he was struggling to find the right shot to put his opponent away.

That all changed in the ninth. A right uppercut had Rodrigues stumbling and when the follow up barrage backed him into a corner his trainer, Alan Toweel jr., had seen enough and sent the towel flying into the ring. Referee Simon Xamlashe obliged, waving it over at the 2:40 mark.

South Africa is going to have to wait a while for another heavyweight to capture the public imagination.

Josh Pretorius burst the bubble of the giant Wilhelm Nebe, handing him a boxing lesson over six rounds to triumph by unanimous scores of 58-56 and two cards of 59-55.

In a David and Goliath battle, the much smaller Pretorius boxed well, circling around Nebe in the first round. He landed a stiff right hand and moments later a solid left hook while keeping his jab in Nebe’s face. Nebe landed a single right towards the end of the round that had Pretorius taking a step backward.

That, essentially, was the story of the fight. Pretorius circled, landing left hook after left hook with some jabs and an occasional overhand right thrown in. Nebe had no idea how to cut off the ring and simply followed Pretorius, shaking off the punches and landing far too few of his own.

In the third, an increasingly desperate Nebe almost went through the ropes as he missed a big right. Pretorius responded by sending a halo of sweat flying from his head with a left hook as Nebe straightened himself out.

Nebe clearly had the power and there were moments that he troubled Pretorius, most notably when he landed some right hooks to the body. The odd right to the head also reddened the left eye area of Pretorius but his punches were too few and far between.

Pretorius had another big round in the fifth, landing some good combinations while making Nebe miss.

Sensing he was behind, Nebe tried hard to finish matters in the sixth. He managed to wobble Pretorius with two big rights and a left hook moments later put Pretorius in the corner when the referee inexplicably paused the action to retrieve Pretorius’s gumshield which went flying out during the exchange.

Still, Pretorius came through the wobbly moment and at the end of the bell, he was a deserving winner, taking his record to 8-5 while Nebe drops to 5-1.

Nebe will have to learn to cut off the ring, be consistent with his jab and simply throw more punches.

Junior bantamweight, Ricardo Malajika, returned with a bang from his first defeat, knocking out an overmatched Khayalethu Mbedje in the first round. A blistering barrage of punches, punctuated by a straight right deposited Mbedje in his own corner where he was counted out at the 2:12 mark.

The card was presented by Golden Gloves Promotions of Rodney Berman.