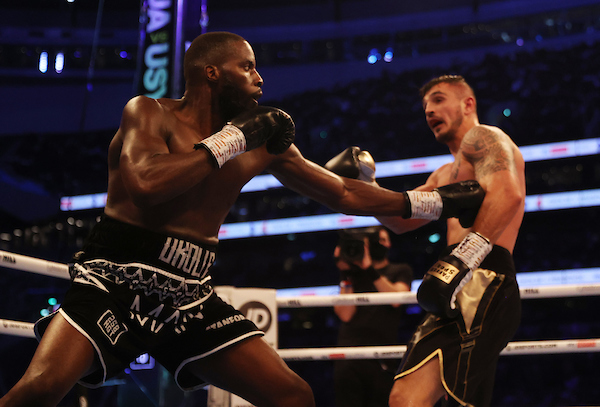 LONDON – The cruiserweight to heavyweight jump could become fashionable.

Amid talk of a potential move into the glamour division, the 6-foot-5 Lawrence Okolie successfully defended his WBO cruiserweight title for the first time with a dominant third-round knockout over mandatory challenger Dilan Prasovic at the Tottenham Hotspur Stadium on Saturday. The official time was 1:57. 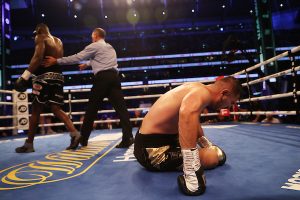 Okolie, who is rated No. 3 by The Ring at 200 pounds, decked the Montenegro-born fighter with a right in the second round and closed the show with a big left hook to the body in the third. Prasovic didn’t look like rising and referee Steve Gray administered the full count.

It was a quiet opening session but Okolie probably edged it with the cleaner lead hand work. There were signs early that the action could get untidy following numerous clinches and both men frequently struggled to locate punching room.

However, a big right hand from Okolie landed midway through the second round and the warning signs were out. Another short right landed just moments later and caused Prasovic to lose his equilibrium before a quick right put the visitor over. Prasovic avoided anything heavy for the remainder of that session but his fate was sealed.

The home fighter stayed aggressive and following a quick exchange at ring center, Okolie released a wide left hook to the body that hit the sweet spot.

The main reasons for any cruiserweight to make the incursion into the heavyweight terrain is fortune and glory. It doesn’t matter what a fighter does at 200 pounds, it can never compare, financially or legacy wise, to what he does in boxing’s premier weight class.

Okolie (17-0, 14 KOs), 28, has the height and the frame to bulk up and pose a significant threat to the heavyweight elite. He has noticeably improved under the tutelage of trainer Shane McGuigan and punches very well with both hands. He would be a welcome addition to the heavyweight division in the near or distant future, but another title defense is likely before the end of the year. 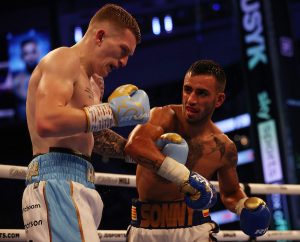 Junior lightweight Campbell Hatton extended his unbeaten record to 4-0 with a hard-fought and highly controversial six-round decision over Spain’s Sonni Martinez. Referee Marcus McDonnell was the lone judge and scored the bout 58-57 in favor of the Manchester fighter.

Martinez will feel very aggrieved with the decision because he scored with a lot of eye-catching work, regularly finding a home with uppercuts and hooks to the head. There were some memorable throughout, which made for some great entertainment, but Hatton will need to tighten up if he’s to make a significant impression at British level.