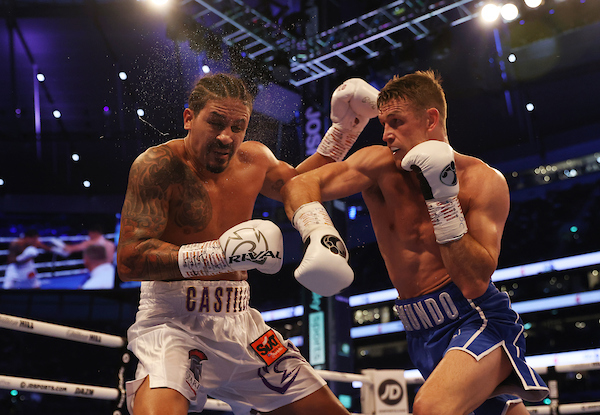 LONDON – Former Ring Magazine super middleweight champion Callum Smith made a successful and explosive debut at light heavyweight by knocking out the Dominican Republic’s Lenin Castillo in two rounds at the Tottenham Hotspur Stadium. The official time was 0:55.

Smith, who still maintains a No. 3 rating by The Ring at 168 pounds, was coming off a wide points loss to pound-for-pound star Canelo Alvarez in December and was in no mood to hang around. The home fighter targeted the body in Round 1, but it was a brutal straight right hand to the chin that knocked the visitor out cold upon impact. 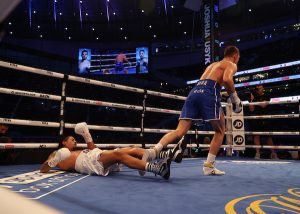 The count was waved, paramedics were immediately requested, oxygen was administered and Castillo was stretchered from the ring. The 33-year-old native of the Dominican Republic was taken straight to a hospital where he was reportedly responsive.

The home crowd showed class in applauding the stricken fighter’s effort and we must hope and pray that he makes a full recovery.

The ex-champion looked visibly concerned before leaving the ring.

At 6-foot-3, and with a very large frame, Smith is built for light heavyweight and certainly won’t need to grow into the division. However, achieving significant success won’t – and certainly shouldn’t be – a walk in the park. The reigning titleholders are Artur Beterbiev (IBF/WBC), Dmitry Bivol (WBA) and Joe Smith Jr. (WBO), who would all present the Liverpool man with a variety of different challenges.

Smith (28-1, 20 KOs), 31, told this reporter during fight week that he would be more than willing to face any of the 175-pound elite, providing his performance against Castillo was up to par. It’s therefore likely that the always ambitious Smith will be chasing up a big fight very soon.