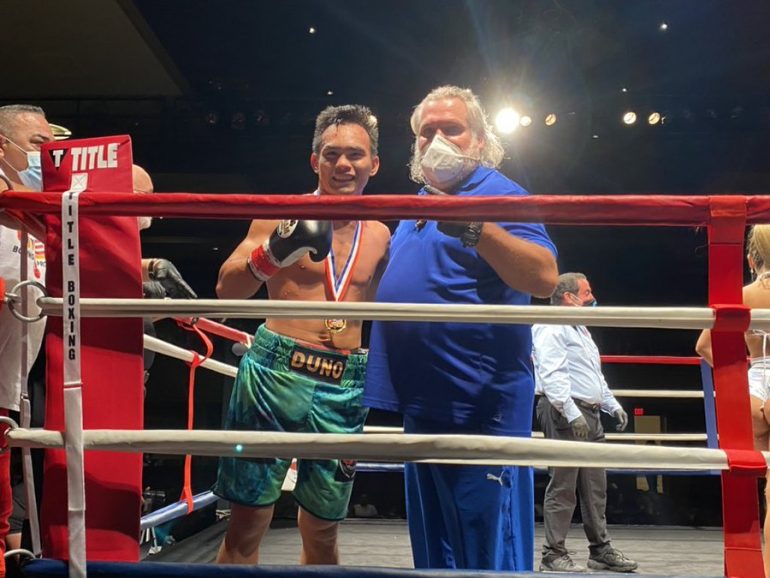 There were no knockdowns, and Perez was never seriously hurt, but the difference in punching power was apparent from the opening bell. Duno (24-2, 18 knockouts) stunned Perez (38-28, 30 KOs) in round two with a straight right hand, and then followed up with thudding body punches and clubbing overhands.

The 34-year-old Perez, a native of Barranquilla, Colombia who began his career as a flyweight, had little power to hold off the larger man.

“I thought it will go long rounds, maybe 7 or 8, to finish the fight. I don’t know why he stopped. Maybe he got hurt,” said Duno, 25, of Cotabato City, Philippines.

Filipino lightweight Romero Duno overwhelms Jonathan Perez with power punches in round two, forcing Perez’s corner to throw in the towel after round two in Miami. The win is the third straight for Duno pic.twitter.com/SCW7nstGE8

Duno was fighting for the second time in a month, having scored a first round stoppage of Ramon Elizer Esperanza last month, also in Miami. He has been training for the past two months under new head coach Osmiri “Moro” Fernandez, who also trains his Sanman Promotions stablemates Reymart Gaballo, Mike Plania and John Vincent Moralde.

Duno has won three straight against lesser opponents since losing by first round knockout to Ryan Garcia in November of 2019.

Duno’s promoter, Jim Claude Manangquil of Sanman Promotions, says the plan is to get Duno back into a meaningful fight next.

“His confidence is back. We hope to land a bigger fight and have Romero redeem himself,” said Manangquil.

Duno says the fight he wants most is a rematch with Garcia, but admits he has a lot to prove before that can make sense.

The card, promoted by M&R Promotions, featured a mix of prospects from around the world who make their training homes in Miami.

Among them was Siarhei Novikau, a 6’5″ cruiserweight from Belarus who stretched his undefeated record to 7-0 (7 KOs) with a second round stoppage of Kevin Brown (2-16, 1 KO) of Missouri. Novikau, 32, had competed in the 2016 Olympic qualifiers, losing a decision to Great Britain’s Joshua Buatsi.