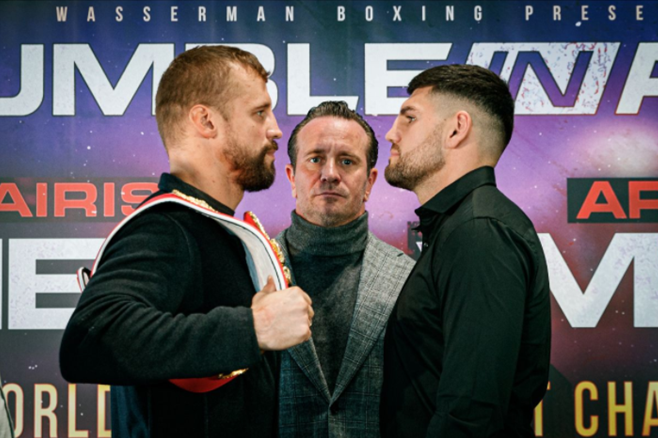 Mairis Briedis (27-1, 19 KOs) and Artur Mann (17-1, 9 KOs) came face-to-face for the first time today at the Porsche Center Riga for a kick-off press conference ahead of their IBF and Ring Magazine World Cruiserweight Title clash on October 16 at the Arena Riga in Latvia.

Briedis has turned the Arena Riga into a hometown fortress with unforgettable nights against Mike Perez, Oleksandr Usyk and Krzysztof Glowacki in recent years. The 36-year-old will now return for the first time since his June 2019 victory over Glowacki to defend the belts he claimed when defeating Yuniel Dorticos in the final of the World Boxing Super Series in September 2020 to establish himself as the number one Cruiserweight on the planet.

“Of course, it will be a great pleasure to return to the Arena Riga to defend my IBF and Ring Magazine Titles in front of my Latvian fans,” said Briedis. “My opponent Artur Mann is an experienced and unpredictable boxer. I have watched many of his fights and each one has been different. In Arena Riga, we will see real boxing, not old masters like Holyfield or YouTubers. I hope people who love boxing will come to the show to witness a real fight.”

Artur Mann, the former WBO International Champion and IBO World Cruiserweight Title challenger, appeared in a confident mood insisting all the pressure was on his opponent ahead of their hotly anticipated World Title fight.

“I’m very excited to get this opportunity to fight Mairis Briedis for his World Titles,” said Mann. “I would like thank Kalle Sauerland and Wasserman Boxing for making this fight. This is not a new situation for me. I know the game and I have fought all over the globe. When the bell rings, I will be ready. It doesn’t matter how many people are in the arena supporting Briedis. There is no pressure on me. All the pressure is on him. I’ve got nothing to lose.”

Promoter Kalle Sauerland said he is delighted to be returning to Riga and is looking forward to soaking up the ‘red-hot atmosphere’ on October 16.

“Viva Las Rigas,” exclaimed Sauerland. “We’ve had some fantastic nights at the Arena Riga with Mairis Briedis and we’re delighted to be back with another big event. Mairis has put Riga on the boxing map. It is now known all over the world as a place with a red-hot boxing atmosphere. On October 16, we have another massive event. The absolute number one Cruiserweight in the division against the number six in the world – a young, hungry German challenger, who I’m sure will be looking to take his chance. But Mairis is focused and he intends to prove that Latvia still has the number one Cruiserweight boxer in the world.”

Tickets for the IBF and Ring Magazine World Cruiserweight Championship contest between Mairis Briedis and Artur Mann start from €29 and are on sale now and available to purchase via https://www.bilesuserviss.lv.