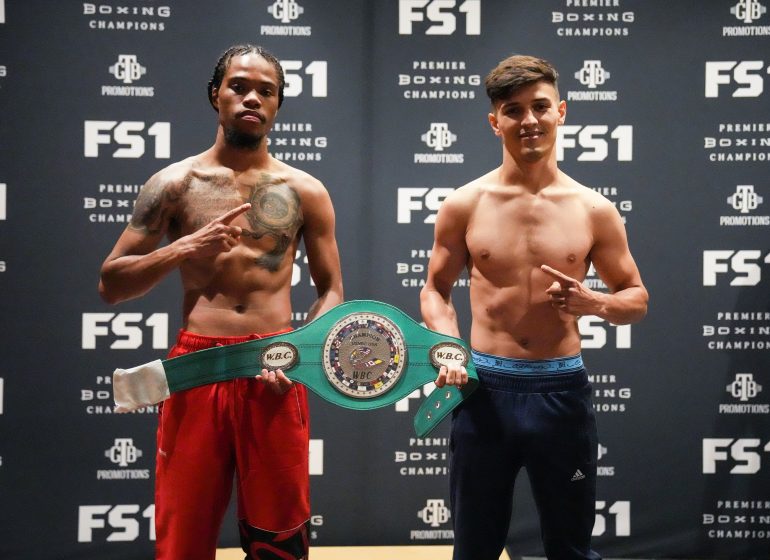 Maliek Montgomery showed boxing fans just what he was made of in his television debut, outfighting determined spoiler Aleem Jumakhonov to a unanimous decision win Sunday at the Mechanics Bank Arena in Bakersfield, Calif.

Montgomery, a two-time National Golden Gloves champion, had won all 10 of his previous bouts by knockout, and had never fought past the fourth round prior to his headlining bout on the PBC on FS1 card, but learned more in ten rounds than he had in his previous 26 as a professional.

“I felt good. All this conditioning is paying off. We’ve been ready for ten round fights four fights ago. To actually be in and go the rounds and get the recognition that I deserve for it, it’s a blessing,” said Montgomery (11-0, 10 knockouts), a native of Macon, Ga.

Montgomery, who had never previously fought an opponent with a winning record, came out aggressively against the durable Tajikistan native Jumakhonov (9-4-2, 5 knockouts).

Jumakhonov proved to be ready for the challenge, knocking out Montgomery’s mouthpiece in a bruising fourth round. Montgomery, who trains with Kenny Porter in Las Vegas, began the fight as a southpaw but reverted back to his original orthodox stance as he looked to box more against the one-dimensional Jumakhonov.

Montgomery did his best work when he was able to muscle Jumakhonov to the ropes, running off multiple-punch combinations. Jumakhonov used those moments of aggression to counter Montgomery, catching him between shots on multiple occasions. The pace began to wear on Jumakhonov, and referee Jack Reiss called the ringside doctor to his corner after the eighth to check on him.

What a Main Event. 🔥 #PBConFS1

The doctor’s visit proved to be a call to action as Jumakhonov began the ninth by rocking Montgomery with an overhand right that landed right on the chin. Montgomery buckled momentarily but returned fire and landed big shots of his own. The two continued to brawl to the final bell, though Montgomery’s superior boxing ability and combination punching proved to be the difference.

The Compubox numbers help illustrate just how active these two fighters were, with Montgomery landing 339 of 973 punches compared to 185 of 864 from Jumakhonov.

Omar Juarez bounced back from his first defeat in dominant fashion, outpointing a tough, game Jairo Lopez over eight rounds to win a unanimous decision.

One judge scored it an 80-71 shutout for Juarez, while the other two judges scored it 79-72 and 79-73 over Lopez (26-14, 17 KOs). Juarez, 22, of Brownsville, Tex. showed no ill effects from his first defeat, a majority decision loss to All Rivera in June, throwing flashy, hard combinations at the durable Lopez.

Lopez looked ready to go in round four, wincing as Juarez targeted the midsection with sharp hooks, but managed to make it out of the round. Juarez scored the only knockdown of the fight in round 5, dropping Lopez with a straight right hand. Again, Lopez showed his toughness to survive.

Angel Barrientes kicked off the televised portion of the card, scoring his third straight victory since his lone defeat with a shutout decision win over Victor Torres.

The 5’11” junior featherweight from Honolulu, Hawaii used his jab to start his offense, but wasn’t afraid to get inside on his shorter opponent to land counter hooks to the head and body. Torres (7-9-1, 5 KOs) took a lot of punishment from Barrientes (6-1, 4 KOs), but never was close to being stopped.

Barrientes, 19, was returning to television for the first time since losing last December to Travon Lawson by fourth round knockout. Barrientes is one half of a twin tandem; his brother Chavez has a 6-0 (5 KOs) pro record.