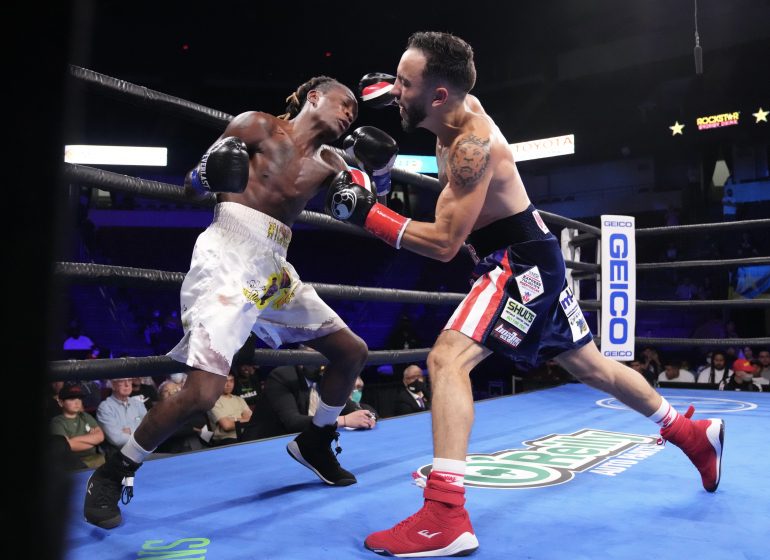 The focus was supposed to be on 22-year-old southpaw lightweight Jose Valenzuela Saturday night—as it should have been—in the PBC Fight Night on FOX main event from the Mechanics Bank Arena, in Bakersfield, California.

But someone else took Valenzuela’s thunder in the nationally televised broadcast.

Valenzuela (10-0, 6 knockouts) did what he was supposed to do, winning a tough 10-round unanimous decision over rugged 30-year-old Colombian Deiner Berrio.

What no one expected was the six-round majority draw Elon De Jesus (3-0-1, 2 KOs) received against Rajon Chance (5-0-1 5 KOs) in an exciting co-feature.

De Jesus was credited with a fifth-round knockdown caused by a brutal right uppercut, but he actually knocked down Chance twice.

The problem was referee Jerry Cantu got in the way—far more than he should have.

With 1:34 left in the fourth, De Jesus nailed Chance with a right on the chin. Chance was knocked off balance, with both gloves easily touching the canvas. As Chance was leaning downward, De Jesus hit Chance in the back of the head.

Cantu never called a knockdown on the punch. Instead, much to the shock and dismay of almost everyone watching and present, Cantu deducted a point from De Jesus for the punch to the back of Chance’s head without a warning.

“I saw that punch as a knockdown and Chance was already rattled from the shot, and his hands touched the canvas and it came from the punch,” said FOX blow-by-blow announcer Ray Flores, who called the fight. “Then Cantu took the point from De Jesus, and there is no way that point should have been deducted. It was an inadvertent punch that came without a warning from Cantu.

“Cantu was horrendous and De Jesus got robbed tonight. He had the fight won and he was robbed because of incompetent officiating.”

Cantu gets credit for one thing—he outdid himself in the fifth round.

With 1:34 left in the round, De Jesus unloaded a right uppercut and clearly knocked down Chance this time. Cantu reached a count of eight and when Chance, his forehead bloody, told Cantu he couldn’t see, so Cantu called a timeout with 1:18 left in the fifth.

Judge Rudy Barragan gave the decision to Chance, 57-55, while judges Sergio Caiz and Zachary Young both scored it a 56-56 draw.