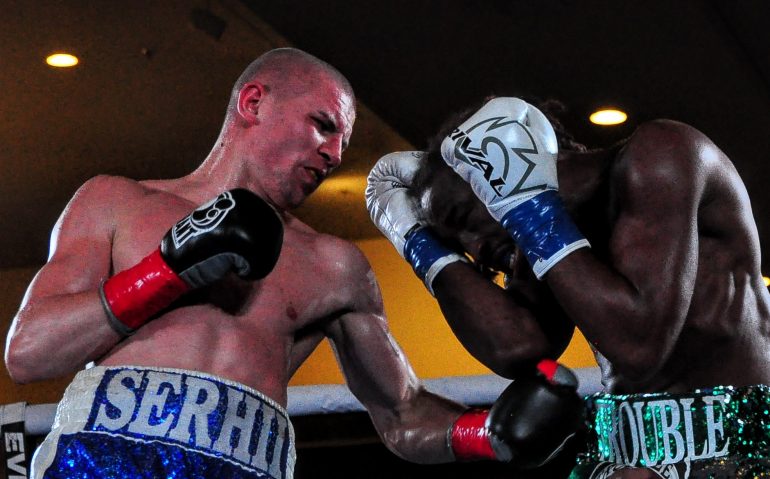 MONTEBELLO, California – Once-beaten up-and-comers Serhii Bohachuk and Ali Akhmedov got their careers back on track with stoppage performances in the co-main events of promoter Tom Loeffler’s “Hollywood Fight Nights” club series debut on the UFC Fight Pass platform on Thursday.

Bohachuk (20-1, 19 KOs), who was just one bout removed from an eighth-round TKO loss to Brandon Adams in March when he entered Thursday’s main event matchup with Raphael Igbokwe (16-3, 7 KOs), got back to his punishing volume-punching ways against his game-but-outgunned opponent from Houston, earning an impressive stoppage at the end of Round 6.

Bohachuk won every round with a non-stop two-fisted attack, but the L.A.-based Ukrainian was technically sound throughout the scheduled 10-round middleweight bout. Igbokwe’s corner stopped the fight after referee Jack Reiss expressed concern for the 27-year-old boxer’s safety.

In the co-featured bout of the event, which was presented by Roy Jones Jr. Boxing Promotions in conjunction with Loeffler’s 360 Promotions and streamed live on UFC Fight Pass, Akhmedov (17-1, 13 KOs) made short work of David Zegarra (34-6, 21 KOs), stopping the Mexico City-based veteran after three one-sided rounds of a scheduled 10-round light heavyweight bout. Zegarra, a 36-year-old native of Peru who had lost three of his last five bouts by stoppage, was simply too small to withstand the size and power advantages of Akhmedov, who is 10 year his junior.

Akhmedov had not fought since the first loss of his pro career, a 12th-round stoppage to Carlos Gongora in December. Gongora is currently The Ring’s No. 10-rated super middleweight. Time will tell if Akhmedov, who is promoted by Gennadiy Golovkin, can join Gongora in the rankings or avenge his loss to the Ecuadorian, but trainer Johnathon Banks is doing his job by getting the Kazakhstan native to settle down and box more. 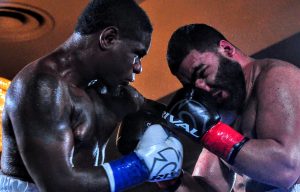 Adrian Taylor and Rafayel Simonyan battle in the trenches. Photo by German Villasenor

Rafayel Simonyan (9-1-1, 8 KOs) and Adrian Taylor (11-1-1, 4 KOs) battled to a split-draw in a rousing eight-round cruiserweight fight that some observers thought Taylor deserved to win due to his superior activity and cleaner punching.

Simonyan, a 27-year-old Armenian who is trained by Abel Sanchez, was game and aggressive throughout the fight, but wasn’t able to defend himself from Taylor’s right crosses, uppercuts and left hooks, often delivered in close quarters. Taylor, a 30-year-old Dallas native coached by Nathan Pipitone, appeared to have boxed the fight of his five-year pro career but it wasn’t quite enough for the California judges.

Adrian Corona knocked out Daniel Robles in the opening round of a scheduled six-round clash between unbeaten junior lightweight prospects. Corona (8-0, 2 KOs), the 21-year-old son of prominent referee Ray Corona, clipped the heavy handed switch-hitter with a knee-buckling left hook while Robles (7-1-1, 5 KOs) was changing his stance from orthodox to southpaw and followed up with right hands that brutally put the 29-year-old puncher to the canvas. The bout was waved off at 2:45 of the opening round. 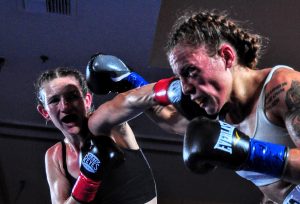 In the opening bout of the UFC Fight Pass broadcast, Chelsey Anderson won a four-round lightweight bout against Elvina White on the strength of knockdowns scored in Rounds 1 and 2. Both knockdowns were off of right hands, and the the knockdown scored at the end of Round 2 was a hard one, but White got up, survived and battled back in Rounds 3 and 4, still catching hard right crosses and uppercuts in the third, but landing well enough to win the final round on two of the judges scorecards.