Renowned documentarian Ken Burns takes on ‘The Greatest’ this weekend 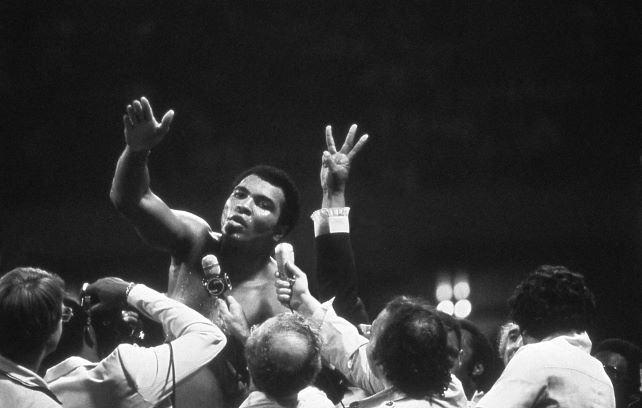 Ken Burns has never been afraid to tackle a tough subject for his worldwide documentaries that appear on PBS. The boyish-looking 68-year-old filmmaker captivated the world with documentaries, starting with his film on the American Civil War, followed by his depictions of Jack Johnson, World War II, Jackie Robinson and the Vietnam War.

Now Burns, arguably the greatest documentarian of all-time, will take on “The Greatest” of all-time, Muhammad Ali, beginning Sunday night, September 19th (8 PM-10:30 PM ET) on PBS, which will be the first of Burns’ four-part series on Ali.

Round One, “The Greatest,” covers Ali’s beginnings and his march towards stardom and introduction to the Muslim religion. Round Two, “What’s my name?” will appear Monday night, September 20th, (8 PM-10:30 PM ET), covering Ali’s exile and fall, followed by Round Three, “The Rivalry,” covering his clashes with archrival Joe Frazier, on Tuesday, September 21st, (8 PM-10:30 PM ET).

The documentary doesn’t reveal too much ardent boxing fans and Ali supporters do not already know, but it does meld where Ali was at different stages of his life to where society was beyond Ali’s safe haven inside the ring.

Burns does supply rare footage of Ali and the film also reveals quite of bit of The Greatest’s warts, namely his womanizing throughout much of his professional life.

Burns put the film together along with his daughter, Sarah Burns, and Dave McMahon. He’s built a portrait of Ali through Jonathan Eig’s “Ali: A Life,” and David Remnick’s superb “King of the World” biographies.

“He’s obviously the greatest boxer of the 20th century,” Burns said. “You can certainly have an animated barstool discussion over whether he’s the greatest athlete ever. It’s certainly within the realm of argument.

“He’s also one of the most compelling figures of the last half of the 20th century. He was born in the early 1940s in segregated Jim Crow, Louisville, Kentucky, and died 16 years into the new millennium. His boxing life intersected with so many of the themes of that period, with what we’re also wrestling with now and the intersection of race, of course, with civil rights, politics, war, faith, religion and Black identity.

“He lost three three-and-a-half years of the prime of his boxing life, after refusing induction into the draft. He was divisive, and yet he died the most popular person on the planet, which is not a bad thing for any of us to tilt towards.”

In researching Ali, Burns said every day presented new surprises. Ali’s life has been well documented and Burns wanted to take a more comprehensive look of his life’s arc. Too often film makers like nice, tidy scenes. Ali’s life was far from tidy. He was controversial and outspoken, and he defined himself when Blacks were not even allowed to walk on the same side of the street as whites. 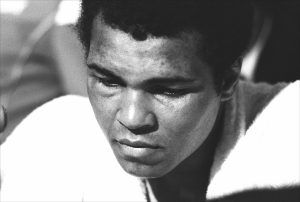 Burns pulls no punches when it comes to Ali’s womanizing throughout much of his professional life.

Burns’ work on Johnson in “Unforgivable Blackness: The Rise and Fall of Jack Johnson” allowed him to look at both great fighters. They had similarities, but there was also a gaping gulf of contrast.

“When I was working on ‘Unforgivable Blackness: The Rise and Fall of Jack Johnson,’ it seemed incredulous to me that Johnson even survived, that he wasn’t killed, assassinated, or lynched,” Burns said. “Johnson was on his own, doing things that we heralded Muhammad Ali for decades later. The big difference between the men was as talented as Jack Johnson was, and as great a boxer as he was, and should be in the argument of greatest boxers, was nonetheless just for himself.

“Muhammad Ali was about something much bigger than himself. That’s where he distinguishes himself. No one had to pay the kind of price Muhammad Ali had to pay in keeping true to his principles and beliefs. Athletes speak out and it’s important that they do. They’re important social figures. I wholeheartedly reject the idea of shut-up and dribble. It’s racist and it’s insensitive. But at the same time, nobody is going to go against their Nike deal, while Muhammad Ali at the height of his powers said he wouldn’t do that.

“It’s why Ali is an important subject and why he’s an enduring figure not just in sports, but in American life.”

What also made Ali so special was how tangible he was. Many people would take the trek to Deer Lake, Pennsylvania, where Ali would hold training camps, and sit and talk with The Greatest at a picnic table as he had breakfast.

Can you imagine anyone today doing that with LeBron James or Aaron Rodgers?

“A lot of people remember Ali for his divisiveness,” Burns said. “First, he came at us as this braggadocious guy who didn’t fit into what an athlete, in particular a Black athlete, should behave like, after the temperance of Joe Louis and to a lesser extent Jackie Robinson.

“Then, of course, when he joined the Nation of Islam, a religious sect that had already been vilified in the national press for being a hate group, he was further divisive and people refused to call him by his new name Muhammad Ali, preferring to taunt him by the old name, Cassius Clay.

“Then when he refuses induction, he becomes a lightning rod for people’s hatred for both ‘patriotic’ and racial reasons. At the same time joining a separatist, religious cult, he nonetheless was available to everybody.”

Burns referred to the famous image of Ali with the Beatles at Miami’s Fifth Street Gym prior to the first Sonny Liston fight. In the setup shot, it’s the domino punch of Ali knocking down the Beatles. Burns points out they were five people in one shot who understood the power of love and spent their entire lives practicing it. 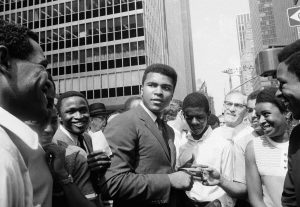 Ali was always surrounded everywhere he went. Here he was mobbed by autograph seekers in Manhattan on Aug. 23, 1968. (Photo by Anthony Camerano).

“Love is a four-letter word that the FCC allows me to put in a film, but it’s a word that is very uncomfortable to talk about it, so in every occasion of someone meeting Ali, they said he was always open to them,” Burns said. “Many people said to me Ali made them feel like they were the person he had woken up that morning to see.

“Ali spread a kind of love around the world. He would go to refugee camps in Pakistan during the Soviet occupation of Afghanistan, to Africa, to Saudi Arabia, and he was this adored figure on every continent. He knew he had a calling in life. He knew he had something to give. He would say, ‘Service to others is the rent you pay for your room in heaven.’” 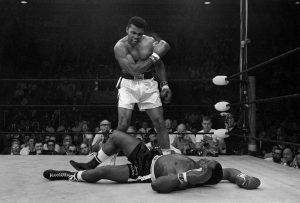 Ali’s legacy endures to this day.

Burns said he felt honored to be taking on the Ali project. He’s building his dinner table of historic figures he’s documented. They include Louis Armstrong, another avatar of love, Abraham Lincoln, Elizabeth Cady Stanton and now Ali.

“Ali would dominate and we would all be laughing,” said Burns, who met Ali once from a distance in Los Angeles in the late 1990s and they acknowledged each other. “If there is one thing that will resonate with me from doing this film, is I didn’t realize how much I love him.”