Not blown away by new the Matchroom/DAZN offerings 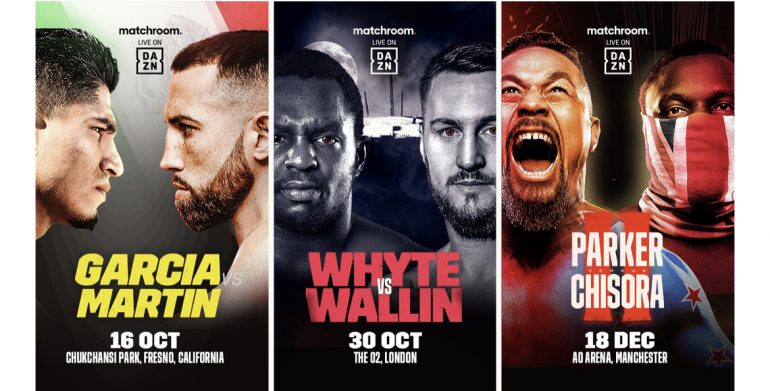 The shift from focusing on the US market, to working to build the company up outside America continues for DAZN.

DAZN and promotional partner Matchroom aka Eddie Hearn, announced three fight cards, quieting some of the chatter which is ricocheting round the grapevine, that DAZN seems to be “over” America as a boxing bastion.

But, in fact, the October 16 ring return of Mikey Garcia is slated to unfold in a ring situated in America. Garcia is to fight “European super-lightweight champion” Sandor Martin at Chukchansi Park in Fresno, CA. 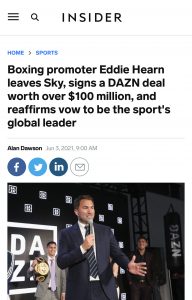 Eddie has made out better than anyone, looks like, with his relationship with DAZN.

No, that scrap won’t float the boats of fight fans who are edgy that we haven’t been getting enough marquee matchups of late.

No, I didn’t know who Sandor Martin was either… 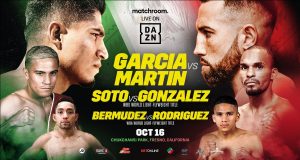 Then, on October 30, WBC “interim heavyweight champion” Dillian Whyte battles Swedish fighter Otto Wallin; that one unfolds live from The O2 in London on DAZN.

Beyond that, we will, fate allowing, see on December 18 a heavyweight clash Joseph Parker and Derek Chisora, a rematch, at the AO Arena in Manchester, live worldwide on DAZN (except New Zealand and Samoa, for the record).

It looks to me, in scanning social media, boxing watchers are underwhelmed with the scheduled attractions. Martin (38-2, 13 KOs) looks like a “get a win” opponent, so it’s dubious that Mikey’s return will be anything other than formulaic…But of course, the sport does still thrill us with the odd “theater of the unexpected” moments, so maybe the fight will surprise to the upside.

Garcia is slated to glove up for the first time since defeating Jessie Vargas in Frisco, TX in February 2020.

Here is the BoxRec for the Spaniard Martin—you can see who maybe is his signature win, I didn’t see anything glittering there. 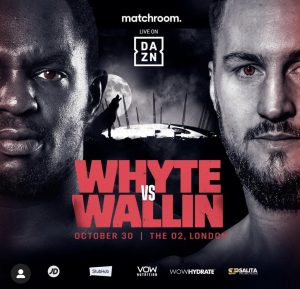 Whyte will be the favorite, coming off a rematch win over Alexander Povetkin. Wallin beat Dominic Breazeale and Travis Kauffman after a unanimous decision loss against Tyson Fury.

The December 18 main event, pitting Parker (29-2, 21 KOs) against Chisora (32-11, 23 KOs), will not inspire ardent proclamations of anticipation among the fandom. 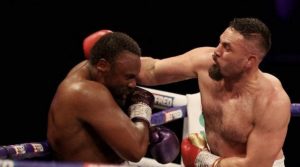 But their May 2021 faceoff, see above, wasn’t without some drama, so maybe the sequel will build on that. But it has to be said, Parker isn’t someone a promoter wants to build around, as a centerpiece attraction. And Chisora is a war machine, but he is limited by skill set and age, and so this bout won’t be seen by most as a premium offering.

Matchroom sent out a release on the forthcoming events, and it included a quote from one Ed Breeze, EVP Rights at DAZN. “These three excellent fights are a testament to the great partnership that continues to flourish with Matchroom globally. Our schedule for the rest of the year is shaping up nicely and filled with World Champions, grizzled veterans, and exciting up-and-coming talent. We look forward to continuing to unveil more blockbuster fight nights as part of our ongoing commitment to deliver value to boxing fans worldwide.”

Excessive gushing and mis characterizing so-so pairings as ‘blockbuster’ isn’t cool, Breeze, but it’s the way of the world in promoting, but I guess it is what it is…

Matchroom Sport Chairman Eddie Hearn said in the release that  “Matchroom and DAZN’s stacked upcoming schedule just got even better with these three blockbuster additions.

Sort of sorry to be in this ‘contempt prior to investigation’ mood, but I see “blah blah blah” when the words “stacked” and “blockbuster” ladled out like that.

Forgive me, but I’m just not able to find it easy to give boxing the benefit of the doubt these days. As always, I hope to be pleasantly surprised, that the fights provide copious thrills for watchers, and that DAZN has other programming and alliances to trumpet. Because as of now, it has to be said that their 2018 campaign to take a hefty share of the market was not a runaway success.

That’s being gentle with the phrasing.