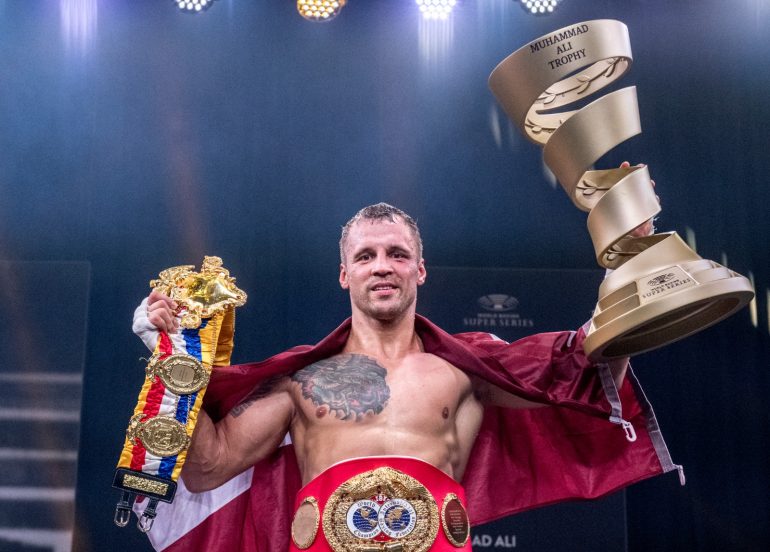 The Latvian boxing star cemented his position as the number one Cruiserweight in world when defeating Yuniel Dorticos in the final of the World Boxing Super Series in September 2020. A fight that saw the 36-year-old claim both the IBF World Title and the prestigious Ring Magazine belt as well as the iconic Muhmmad Ali Trophy.

Briedis, who is now a three-time world champion having previously held WBC and WBO World Titles and considered one of the best pound-for-pound boxers in the world, will get the chance to return to his hometown arena and box in front of his passionate supporters for the first time since his third-round stoppage win over Krzysztof Glowacki in June 2019.

However, Briedis, who was named ‘Rigan of the Year’ for 2020, can expect a tough challenge when he makes the first defence of his IBF belt against Germany’s Artur Mann, a former WBO International Champion and IBO World Cruiserweight Title challenger.

Mann defeated countryman Leon Harth to capture the WBO International Title in July 2017 and remained undefeated until he travelled to South Africa to challenge Kevin Lerena for the IBO World Title in March 2019. Since his sole defeat, the 30-year-old ‘Thunderman’ from Hannover has recorded back-to-back wins to set up a World Title showdown with Briedis.

“It’s crazy to think it has been over two years since I last fought in Riga,” said Briedis. “I think I have already forgotten that fantastic feeling that Latvian boxing fans deliver each time and I can’t wait to step in the ring again in front of my home crowd. It will also be a special night for me as it will be my first IBF Title defence and I’m happy I will be able to do it at the Arena Riga.

“My opponent Artur Mann is a very experienced boxer who was previously part of the Sauerland stable which is already a quality measurement for him as there are no weak boxers invited to join that group. He is a very technical boxer coming from the Kazakh boxing school that is considered by many to be one of the best in the world.

“Together with my team, we are taking this fight very seriously. Defending a World Championship belt doesn’t allow you to do anything less. We have already started our preparations and will do everything to be ready for the fight.”

“I’m very happy to fight for the IBF title against Mairis Briedis, the number one Cruiserweight in the world,” said Mann. “I want to thank my manager Daniel Todorovic and the whole O1NE Sport Crew, and of course, Kalle Sauerland and Wasserman Boxing for this great opportunity. I’m pumped and ready for Riga!

“I have a lot of respect for Mairis Briedis and his achievements but I don’t feel any pressure. Prior to my fight against Kevin Lerena, I felt a lot of pressure because a lot of things didn’t work out as they were supposed to, but this time, I’m super relaxed. All the pressure is on Mairis because he’s the world champ and he’s fighting at home in front of his people, which doesn’t always turn out to be an advantage. He’s got everything to lose and I’ve got everything to win!”

“We’re delighted to be promoting our first event with Mairis Briedis, one of boxing’s pound-for-pound stars, at the Arena Riga under the Wasserman Boxing banner,” said promoter Kalle Sauerland. “We would like to thank the IBF for their support. Mairis was due to fight a mandatory challenger but after negotiations broke down we have applied for special exception to make this fight possible.

“I’ve been lucky enough to witness Mairis fighting in Riga before and the atmosphere is incredible. I can’t wait to hear the noise when he steps into the ring on October 16. Coming to spoil the party is Artur Mann. A tough German contender looking to dethrone Latvia’s boxing king. This is an event you don’t want to miss. Get ready for the Rumble In Riga!”

Tickets for the IBF World Cruiserweight Championship contest between Mairis Briedis and Artur Mann go on sale tomorrow at 12:00 (EEST). Tickets start from €29 and are available to purchase via https://www.bilesuserviss.lv.