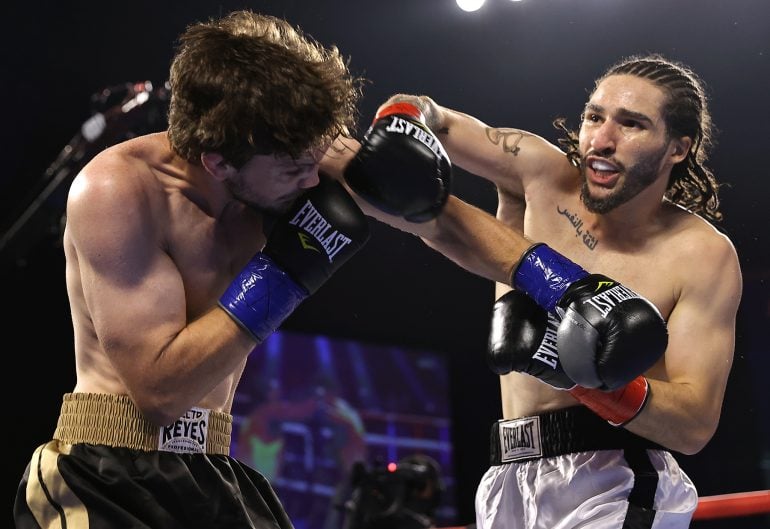 Rasheda Ali saw it too many times. Muhammad Ali’s second oldest, two-and-half minutes older than her twin sister Jamillah, Rasheda grew up around celebrities and the children of celebrities. She saw how they interacted with others who were not on their brand level.

Rasheda saw up close how they behaved and how they walked around with an air of entitlement, rebuffing those they deemed as inferior.

She vowed that her sons, Nico and his older brother, Biaggio, would never be that way.

On the Saturday afternoon prior to Nico Ali Walsh’s pro debut on August 14, Nico and his family were together eating at a diner when a song came on, “Stand By Me,” and Rasheda said, “Daddy’s here.” As Nico was waiting for the trunks, the pair he was supposed to wear to face Jordan Weeks, he was told the trunks would not arrive in time. Instead, he was forced to wear backup trunks—that happened to be his grandfather’s famous white trunks with the black stripes down the sides.

Somewhere, Muhammad Ali is smiling at his grandson Nico for more than just his budding boxing ability. 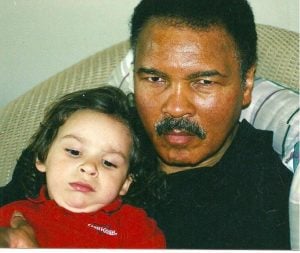 Nico Ali Walsh is a 21-year-old young man who his mother calls an “old soul,” and carries the poise and maturity that belies his age. With the overflowing glut of attention-starved YouTubers and social media influencers out there who are willing to do anything to heighten their “clout,” boxing is being introduced to a refreshing, humble, genuine face in Nico.

Many young people on the same platform, like Nico, lose themselves.

“I saw way too many times how celebrities act and behave towards others, and there is no way Nico or Biaggio would behave like that, and that comes from Bob (Nico and Biaggio’s father and Rasheda’s husband) and I. It also comes from my father,” Rasheda said. “We traveled the world with my father, and the boys saw how compassionate, loving and caring my father was. It’s very rare that you have someone as famous as my dad who always treated people with kindness and respect.

“Bob and I wouldn’t put up with it, either. Religion had a lot to do with it. I taught my boys to respect people regardless of race or religion. That all comes from daddy. My father was the most famous man in the world and anyone could always walk up to him. My father was always approachable and that is what I wanted my children to be. I grew up seeing these celebrities act like they were too-cool-for-school, drinking their own Kool-Aid, and my father never thought like that.”

Nico stopped Weeks in one and is getting ready to embark on his second fight, which will take place on the undercard of Jamel Herring’s WBO junior lightweight title defense against undefeated rising star Shakur Stevenson on October 23 in Atlanta, Georgia, from the State Farm Arena.

But in the meantime, Nico’s absorbing the attention with aplomb, not consumed by it.

He hasn’t lost himself in the bright lights of the media attention. In fact, he’s very much the same as he was before he stepped into the ring on August 14.

Nico will be the first to admit he was on the rambunctious side when he was a child, with attention-seeking behavior stunts, though nothing egregious.

“Honestly, I think the biggest reason why I am the way I am is because of my grandfather,” Nico said. “He was the biggest man of all-time, and at one point, he was the most recognizable face of all-time. He treated everyone as if they were on his level, so there is no reason why me or anyone else should treat people with disrespect.

“There were times I would get in trouble in school over little-kid stuff, which would be blown out of proportion, because of who I was. That gave me motivation not to mess up. I was a big troublemaker in school in an annoying sense, being the class clown. My father is a former U.S. Marine and he put straight. My mother would always tell me ‘You’re an Ali, and this is the way you’re supposed to behave.’ Every family has a mantra to do better, so for my parents, it was really easy. My grandfather made it easy, just follow in his footsteps in how he treated others.”

By the time Nico reached high school, that thirst for attention began to dissipate. Just recently, he’s beginning to re-embrace the interest. He knows it’s going to grow as his success grows. A junior at UNLV majoring in business entrepreneurship, Nico is approaching each step as another destination in a long journey.

“I want to be successful for my own passion for the sport, and after my pro debut, I think I proved to myself that I can do it,” Nico said. “My grandfather’s trunks are going to be retired. I was supposed to have trunks with ‘Nico’ spelled on them. I brought a backup pair or trunks, with my grandfather’s name engraved on them. I had no plan on using them during my pro debut. When I was told before the weigh-in that the trunks I ordered wouldn’t get there in time, that’s when we decided to use my grandfather’s trunks.

“But those trunks are retired.

“There is pressure with the name. I’ll admit that. But it doesn’t mean I have to act like a jackass to gain attention. My grandfather loved his religion and my only piece of advice I have towards others, it doesn’t matter what religion you are, treat people the way you would like to be treated. My grandfather would always say to cash in your blessings.

“I’m afraid I won’t go to heaven, so I cash in my blessings every chance I get. It’s really weird, but I do my feel grandfather’s eyes on me. The night of the fight, I wasn’t supposed to wear his shorts, and I did. For his last birthday, I made this collage for my grandfather with the song ‘Stand By Me,’ which I hadn’t heard in years.

“Before the fight, our family was sitting in a diner together when we heard that song. I remember looking at my mother and her saying, ‘Daddy’s here.’”