The Neutral Corner: Ep. 281 (Valdez wins, Holyfield embarrassed, Montero gets in the ring!) 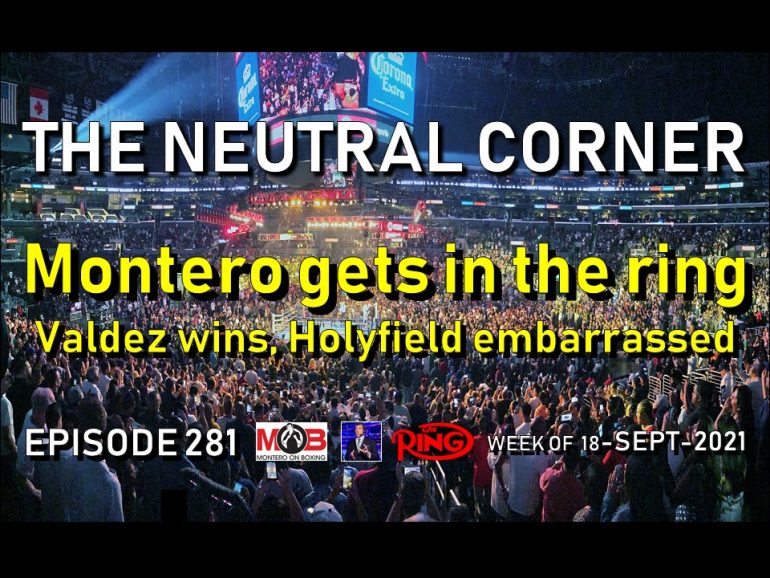 On episode 281 of The Neutral Corner boxing podcast, host Michael Montero returned from a one week hiatus to catch up on two weeks of news and results on the fight game.

The junior featherweight showdown between Stephen Fulton and Brandon Figueroa has been postponed, as it was announced last week that Figueroa tested positive for COVID-19. This was the latest of several anticipated bouts that have been delayed due to COVID over the summer.

In Puerto Rico, former two-division world champion Juan Manuel Lopez was arrested after an ex-girlfriend accused him of domestic violence. This is not the first time that “Juanma” has been accused of abuse. In 2015, he faced domestic abuse charges against his then girlfriend, but the charges were later dropped.

This Thursday night in Atlanta, Michael Montero will be trading his laptop and microphone for boxing gloves and a mouthpiece, as he steps in the ring for a USA Boxing Masters Division bout. Montero will headline a charity event promoted by Terri Moss, taking place at the Buckhead Theater. The show, which includes amateur and professional fights, will be broadcast on the WBC Live Channel. The stream can be purchased for $15. Proceeds from the event will go to a charity in the Atlanta area that provides treatment for people suffering with mental health and/or addiction issues.

On Saturday, September 4, Mauricio Lara and Josh Warrington had to settle for a technical draw in their rematch, which headlined a Matchroom card on DAZN. A clash of heads in the second round caused a bad cut over the Mexican’s left eye, prompting the ring doctor to stop the bout. On the undercard, Katie Taylor defended her undisputed lightweight championship. The card took place in Leeds, England.

On Friday, September 10, Oscar Valdez survived an early scare to beat Robson Conceicao by unanimous decision. The Brazilian challenger started well in the first five rounds, but faded down the stretch. Valdez, who had tested positive for a banned substance before the bout, successfully defended his junior lightweight title for the first time. The bout headlined a Top Rank show on ESPN+.

The following day, former cruiserweight and heavyweight champion Evander Holyfield, who turns 59 years-old next month, was stopped in one round by Vitor Belfort. The fight headlined a “Triller Fight Club” PPV card. For fans who remember watching Holyfield fight in his prime, it was an ugly sight.