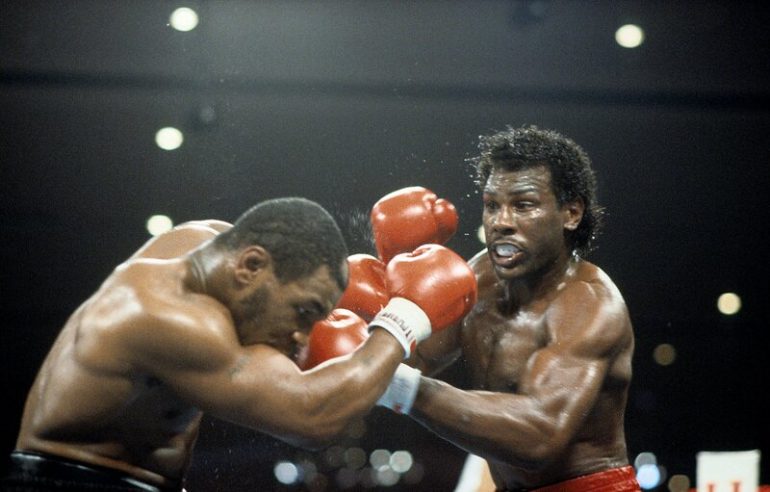 Tucker (right) on the attack against Mike Tyson. Photo by The Ring Magazine/Getty Images
13
Sep
by Anson Wainwright

Tony Tucker holds the ignominious record of shortest heavyweight title reign at just 64 days. However, he still enjoyed a very good career as a top-10 contender in the late-80s and early-90s.

Tucker was born on December 27, 1958 in Grand Rapids, Michigan. He was the oldest child of three and the son of former amateur boxer Bob Tucker, who trained Floyd Mayweather Sr. and was a close friend of Roger.

“Michigan was a beautiful place to live,” Tucker told The Ring. “I didn’t grow up in the ghetto. I grew up middle class; both my parents had good jobs. My dad worked for [furniture manufacturers] Steelcase; my mom worked for Walter Hagen Golf apparel.

“I boxed because my dad was a boxer and I was a daddy’s boy – it was a connection with my dad. I would never have been a boxer; I didn’t care for boxing, I was a better baseball player and football player.”

Tucker graduated from high school while enjoying a very successful amateur career as a light heavyweight. He won gold at the Pan-Am games and World Cup in 1979 and had very real aspirations of representing his country at Olympics before losing in the trials.

However, then-U.S. President Jimmy Carter declared a boycott of the 1980 Moscow games – due to Russia’s invasion of Afghanistan – so the U.S team elected to fight a series of exhibitions in Europe. Tucker had been scheduled to travel to Poland but was injured the day before the flight and stayed at home. Tragically, the plane crashed, killing all 87 people on board.

“There were two disappointments that year,” Tucker said solemnly. “To find out we weren’t having no Olympics and when all the American boxers got killed. One of the guys who was on the plane, Lemuel Steeples, was a best friend of mine.”

After compiling an amateur record of 115-6, Tucker made his professional debut at heavyweight in November 1980 and scored a third-round knockout over Chuck Gardner.

Tucker was guided by his father, but his progression was slow and he was hampered by a knee injury that kept him out of the sport for 15 months. With the team struggling financially, his father sought investment from boxing notables such as Cedric Kushner, Jeff Levine and Josephine Abercrombie.

When then IBF-titleholder Michael Spinks refused to defend his title against Tucker, he was stripped. Subsequently, “TNT” was matched against James “Buster” Douglas to fill the vacancy at the outdoor arena at the Las Vegas Hilton in May 1987.

“We knew each other well because we were sparring partners at one time,” said Tucker, who came on strong after a slow start to stop Douglas in the 10th round. “It was funny because his dad trained him like my dad trained me. We both kind of knew what each other had.”

Tucker, famed for his fashionable Jheri curl, didn’t get to enjoy his new status for very long and was quickly matched against WBA/WBA counterpart Mike Tyson in a unification bout in Las Vegas in August 1987.

The self-proclaimed “Invisible Champion” entered the contest in less than stellar condition.

“When I fought Mike, I had one hand, my right hand was broken 10 days before the fight,” recalled Tucker. “When I went to the doctor, he X-rayed it and said, ‘You’ve got a small hair fracture.’ My dad and the doctor went out the back, came back and the doctor said, ‘I looked at it again and I think we can put you in hand therapy. You can’t use your hand for 10 days.’ I’m so focused to get ready for the fight, I’m thinking my hand is going to be alright if I go to this hand therapy, but I’m not using my right hand for 10 days.

“When I finally used it in the fight, I knew it was shot. I hit him and my right hand was broken and I had to do the best I could with one hand. That’s why I did all them antics, shuffling and rolling my arms. I was trying to show Tyson was nothing to me. The world didn’t know my right hand was broke, I’m a right-handed puncher.

“I blamed it on my dad because he was the person I depended on and he let me go in there knowing I had a broken right hand. It disappointed me. He said I should have beat him with one hand. He said Don King would have blackballed me, but Don King wasn’t my promoter, Cedric Kushner was. We had to sign with Don King to get the fight with Tyson.”

Tucker, who made a career high $1.9 million, dropped a listless 12-round unanimous decision, and his life quickly spiraled out of control.

“The next day, I’m thinking it’s a bad dream,” he recalled. “I woke up to reality that I really lost and didn’t know how to deal with that loss. I had to substitute that pain through drugs.

“I was in Hollywood and going to different parties, trying to fill my night up. I saw people going into different rooms and tried it. That feeling I had, everything else went away.”

Those wins earned him the WBC No. 1 ranking and a fight against newly-minted titleholder Lennox Lewis.

“I stopped using [drugs] for five months and I was in the gym, but it’s hard to erase that and it wears on your career,” said Tucker, who got off the canvas in the third and ninth rounds before dropping a unanimous decision. “It tears you down. I wasn’t at the height of my powers and he was on the way up.

“If I had fought Lennox in top form, it would have been different outcome. My whole thing fighting Lennox Lewis was I wanted to win so I could fight Tyson again.”

Tucker fought on but was a shell of his former self, losing title fights to the younger, fresher Bruce Seldon (RTD 7) and Herbie Hide (TKO 2) before retiring in 1998 with a record of 57-7 (47 knockouts).

“When you use drugs, you age a lot faster.” he said.

Tucker, 62, lives in Dunedin, Florida and has two daughters and a granddaughter. He has been free from his addictions for many years.

“A friend of mine owns a nightclub and I was working there doing a little security work and enjoying retirement life from boxing.” he said.

BEST JAB
Buster Douglas: Lennox Lewis had a good jab but I’d have to say Tyson and Buster Douglas. Tyson was shorter but he had a real quick jab, his hands were fast, and Douglas had a fast jab but it was strong and stiff. I’d go with Buster Douglas – he had a good snappy jab.

BEST DEFENSE
Jimmy Young: He was slippery man (laughs). He could get out of the way of punches; he was real slick.

BEST FOOTWORK
Lennox Lewis: He was light on his feet; he could move, different angles and I had a hard time catching up with him.

SMARTEST
Lewis: He was very smart. He didn’t fall for a lot of the tricks I was trying to set him up with. I guess he knew them too (laughs.)

BEST CHIN
Tyson: I hit him with a good left uppercut that he stood up to. Lennox Lewis took some good shots.

BEST BOXING SKILLS
Douglas: Tyson, Douglas and Lennox had good skills. Douglas was very sound technically; you saw how he fought Tyson. We fought before him and Tyson and he saw how I did and followed [the game plan].

BEST OVERALL
Lewis: Douglas, Tyson and Lennox. They were the best fights I had; they were title fights. Tyson was short, strong, real quick and he could take a punch. Douglas was as tall as me, good strong jab, good defense. Lennox came out from the amateurs, he was real strong, he had reach and it was a different kind of style. He could move good and he had a strong punch. I would say Lennox, he achieved so much, a very good fighter.