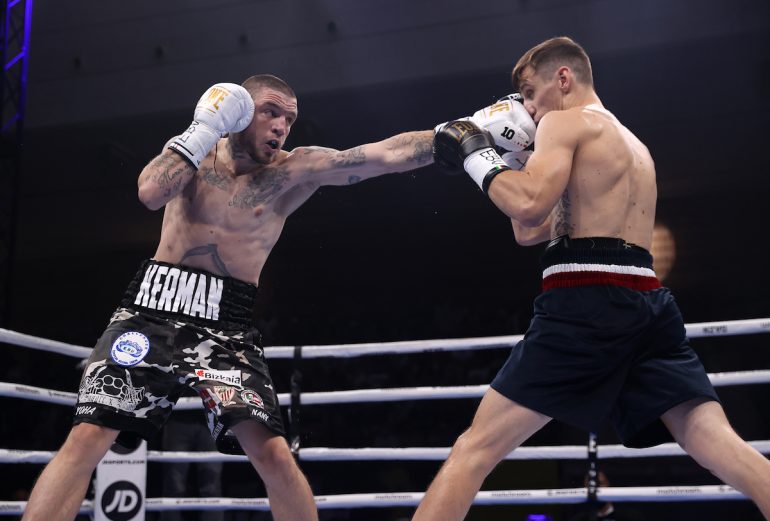 An accidental clash of heads led to a premature ending in the European 154-pound title clash between Spain’s Kerman Lejarraga and Frenchman Dylan Charrat at the Pabellón de la Vall d’Hebron in Barcelona on Saturday.

The 29-year-old Lejarraga (33-2, 25 knockouts) sustained a horrible cut over his right eye in the 10th round and referee Daniel Van de Wiele quickly sought the advice of a ringside physician. Following a lengthy inspection, the scheduled 12-rounder was called off and went to the cards. One judge scored the bout a draw at 95-95 but was overruled by tallies of 96-94 and 96-95 in favor of Lejarraga.

The official result was a 10-round majority technical decision.

Charrat, 27, got off to a great start, connecting convincingly with some sharp combinations to head and body. Lejarraga was in reconnaissance mode early and probably dropped the majority of the first half. However, beginning in the sixth, the vastly more experienced Spaniard began to turn the screw with pace, effective aggression and body work.

Lejarraga, a former European welterweight champion, was heavily favored to win against an opponent who hadn’t saw action since December 2019. But despite his late charge, he was tested throughout by Charrat, who was still fighting extremely well when the action was halted.

This was Lejarraga’s biggest win since a brace of stoppage defeats to the formidable David Avanesyan in 2019.

Charrat falls to 20-1-1 (6 KOs) but given the razor-thin margin of his defeat, one would hope that an immediate rematch is ordered.