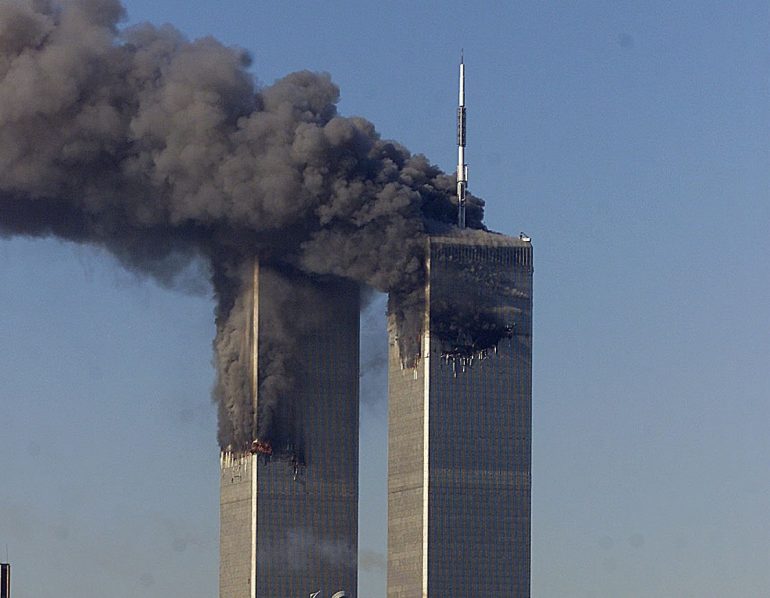 This is the 20th anniversary of  911. This a reposting of Ring’s story on Bernard Hopkins and his recollection of how that tragic day unfolded

There was a high, bright blue sky that Tuesday morning and the brisk temperature made it great running weather. Good for the lungs to intake cool air. Bernard Hopkins wasn’t about to pass on the opportunity, even if the fight that would eventually change his life was only four days away.

So that’s what “The Executioner” did. Took a good, vigorous run in New York’s Central Park, where he briefly saw and said hello to Shelly Finkel and his wife, who were taking a morning walk. B-Hop returned to his St. Regis hotel suite and popped on the TV only to find his world – and everyone else’s – had been eternally altered.

“That’s when things unraveled,” recalled Hopkins, who was supposed to fight Felix Trinidad on Saturday, September 15, for the unified world middleweight championship at Madison Square Garden. “I’m watching TV, taking my wet sweats off, and then I hear on the TV, ‘Oh my God, another plane struck, this is a terrorist attack.’ That’s when it was game on. I wanted to hop in the shower, and when I heard that, I put on some dry clothes and I don’t think I showered for a day and a half after that. I had to get out of there.”

It resonates today. It will always resonate. Everyone in Manhattan 19 years ago on Tuesday, September 11, 2001, was trying to get out the day terrorist attacks on New York claimed the lives of 2,996 people, including the 19 hijackers.

If the planes had struck New York’s World Trade Center an hour later, the list of casualties may have included Hopkins, who was about to leave for a scheduled media workout on Wall Street at 10 that morning.

The gym that was going to host the workout was wiped out by the collapsed towers. That’s how close B-Hop and everyone associated with the Hopkins-Trinidad fight came from having disaster strike them personally. 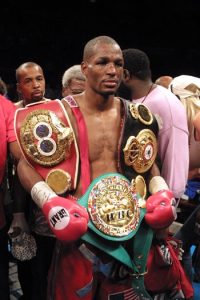 “It was unsettling, because we were just about to leave for that workout,” said the Hall of Famer. “I think back on how seriously close things were for me and my people. I’ll always remember that day and time. Knowing I was less than an hour from being in that gym, at that workout, who knows what would have happened?

“At first, I remember taking it personally. I worked my whole life for this moment, I thought, and I was going to be robbed by some crazy s–t. No one knew what was happening. Then you saw people jumping out of windows because they didn’t want to burn to death. That made it real. It made me think I’m not just fighting for myself. I’m fighting for America. That’s what I was going to do.”

The team that was putting together the Hopkins-Trinidad fight was having breakfast that morning at the Niles Restaurant on 7th Avenue. Publicists Kelly Swanson and Alan Hopper were sitting with Malik Chambers, Hopkins’ personal assistant, when the news flashed over the restaurant TV screens that a plane had hit the North Tower at 8:46 a.m.

“The first plane hit when we were sitting there eating breakfast, knowing our day was about to start,” recalled Swanson, whose brother, Andrew, worked near the World Trade Center and happened to be at a meeting in mid-Manhattan that day. “We were about to head right down there where it happened for the media workouts. We still didn’t know what was happening. At first, it was like a propeller plane hit the World Trade Center; we really didn’t know.

“I remember saying something like, ‘It’s going to be tough getting down there with the plane hitting the World Trade Center.’ Then all of a sudden, the second plane hit and we realized something serious was happening. It took a minute to realize the severity of it.

“We were originally told to go to Madison Square Garden to find out if the fight was still on. When we got there, we spoke about what we were going to do, and at that point we got more news that it was a terrorist attack. The grim reality was right there in front of us. The firehouse next to the Niles was one of the first responders and they lost a lot of guys that day.”

One of Swanson’s more poignant memories is when the fire truck returned from Ground Zero to the station house near Niles, all white, covered in the soot and debris of the collapsed towers.

“Looking back, it was very sad, but there was this feeling that you didn’t want to leave, either, because we were all in it together,” said Swanson, who did get out of New York on Saturday, the originally scheduled day of the fight. “I checked to make sure my brother was OK, and let my family know I was fine. It’s a day and time that I’ll never forget.”

Chambers actually wanted to get a closer look after the first plane struck. Again, everyone was uncertain what was happening before 9 that morning. He grabbed one of those instant cameras to take a few shots. As he ran toward Ground Zero he noticed first responders, policemen and firemen, literally running by, putting on their gear.

“I thought the first plane was some drunk coming home over the weekend from the Hamptons and he ran right into the World Trade Center by mistake,” Chambers said. “That’s what I thought. I’m running down there and I heard the second plane, which was very low, and then ‘Oh s–t,’ it went into the second building. The second explosion went off and that’s when I realized that it was a real event.”

He saw the plane. He heard it, and felt it. Then he smelled it; he was that close.

“You can smell the jet fuel and the burning human flesh,” Chambers said. “I was five blocks away. When the buildings came down, I was a block away from where the smoke and dust stopped.”

During their promotion tour, Team Hopkins met many who they wouldn’t see again. One was Father Mychal Judge, the chaplain to the New York City Fire Department, whom they met on the Monday before the 9-11 attack. Judge was declared the first casualty of that fateful day. 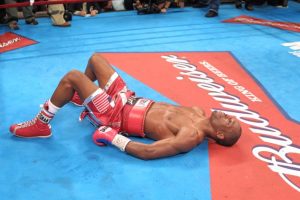 Bernard Hopkins lays on the canvas in the aftermath of his victory over Felix Trinidad on Sept. 29, 2001 (Photo by Al Bello/Getty Images).

It took three days for Hopkins and his team to get out of New York City, though he continued to train in the hopes that the fight would still take place. Not many gave Hopkins a chance against “Tito,” who had crushed his previous two opponents, William Joppy and Fernando Vargas, knocking them down a combined eight times. Stopping Tito in the 12th round proved to be Hopkins’ star-making turn.

At 36, Hopkins was considered ancient even then, yet he systematically popped every rivet in Trinidad’s supposed impregnable armor, found every conceivable weakness Tito had and exploited it. His epic performance will go down as one of the most finely executed game plans in the annals of any sport.

After referee Steve Smoger waved it over at 1:18 of the final round, Hopkins leaped to one of the corners and climbed the ropes chanting, “USA, USA, USA, USA!”

“You know I felt a little guilty celebrating after that fight,” Hopkins says today. “I was thinking that I finally arrived. I got my just due after all of those years. But I didn’t know how to celebrate. We were two weeks away from a tragedy. How do I celebrate? I just reacted with the first thing that came into my head.

“I had to win that fight. I think what gets lost is that we all came together then. We all thought that we were in this fight together and we had to stick together. I think we miss that togetherness today. Our house is the United States. Our house was being messed with. In spite of what anyone thought of me, I was an American, a proud American. It wasn’t just me that won that night. America won that night.” 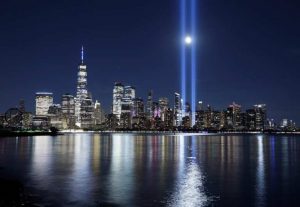