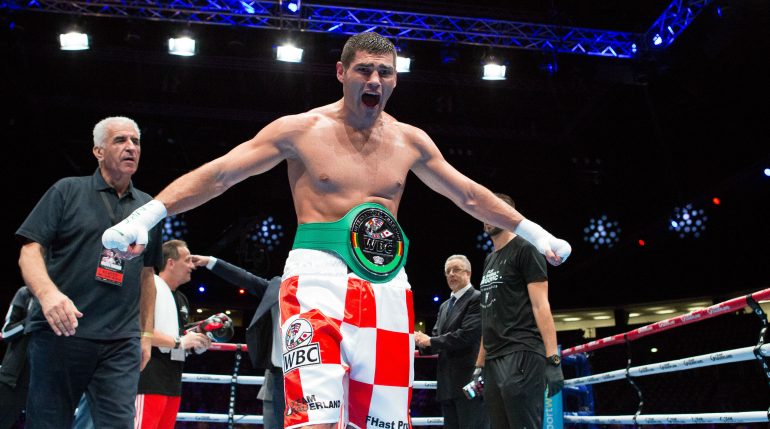 Croatian heavyweight contender Filip Hrgovic improved to 13-0 (11 knockouts) with a third-round stoppage over Marko Radonjic in Klagenfurt, Austria tonight. There were five knockdowns in this one-sided battle of heavyweight giants, which headlined a Matchroom Boxing broadcast on DAZN.

Both men entered the ring undefeated, but Hrgovic had faced much better opposition coming in. Radonjic (22-1, 22 KOs), a Montenegro native who fights out of Germany, was making a huge leap in level of opposition.

It was evident from the opening bell.

Midway through the second round, a chopping overhand right from Hrgovic landed behind the ear and dropped Radonjic. He barely beat the count, but managed to make it to his feet and fight on. A minute later, another right hand dropped him again. Radonjic would hit the canvas twice more before the close of the round, but continued to get up.

Despite the obvious gap in skills, Radonjic did show tremendous character. He steadied himself at the beginning of the third round, but a right uppercut from Hrgovic had him down on the canvas once more. Clearly outgunned but undeterred, he bravely rose to his feet for the fifth time to finish the round.

It appeared that the German’s corner would stop the bout at that point, yet Radonjic walked out for the start of fourth round. However, referee Joerg Milke had seen enough, and wisely did what the corner should have, waving the fight off before any additional punishment could take place.

Hrgovic continues to climb up the heavyweight ratings and figures to be in the world title hunt soon. Radonjic suffered his first loss as a pro.

In the co-main, Dalton Smith improved to 9-0 (7 KOs) with a dominant unanimous decision win over Brian Pelaez in a ten-round light welterweight bout. Pelaez (10-6, 1 KO), hung tough and never stopped competing, but could barely touch Dalton. All three judges scored it 99-91 for the Sheffield, England native, who went past the sixth round for the first time in his young professional career.

Earlier on the undercard, John Ryder scored a fifth-round TKO win over Jozef Jurko of Slovakia to improve to 30-5 (17 KOs) in a light heavyweight bout. Oliver Zaren (5-0, 2 KOs), of Denmark, scored a unanimous decision victory over Pavol Garaj, another Slovakian, in a six-round super middleweight fight. And 19-year-old UK prospect John Hedges improved to 3-0 (no KOs) with unanimous decision win over Croatian Frane Radnic in a six-round cruiserweight bout.