Shakur Stevenson wants it established Jamel Herring is ‘not my friend’ 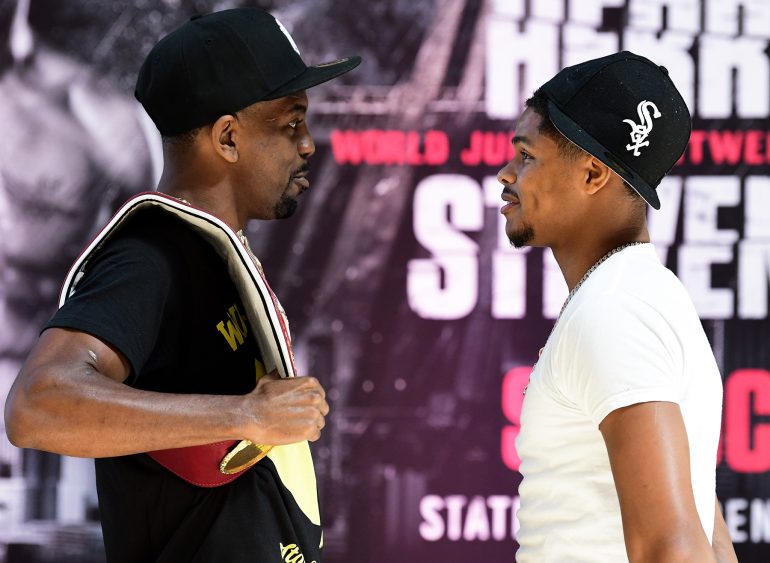 The two used to train together and have many acquaintances, which southpaw Stevenson made sure to clarify.

“(Jamel) is a just a friend of my family,” he said. “He’s not my friend. He’s not nobody I talk to outside of boxing. We don’t (have) no relationship outside of boxing. He’s somebody I see around. He messes with the same people I mess with. Other than that, we’re not friends. I’ve never really been his friend. He’s cool people. I don’t (have a) problem with him at all. It ain’t like I check up on him when I’m not fighting or he checks up on me. I don’t consider that a friend.

“At the end of the day, I’m coming in there to handle business, and I’m going to make sure I win.”

Herring is coming off his biggest victory to date as a pro, stopping former two-division titlist Carl Frampton in the sixth round in April.

“I look at every fight different,” Herring said. “This fight is no easier than any fight I’ve had in the past. I always gave Shakur his respect. I know what I’m going up against, but that’s what motivates me to go in the gym and do what I have to do. I don’t take anyone lightly. It’s familiar territory and another day in the life of Jamel Herring. That’s just how it is.

“They’re making Shakur out to be the future superstar, but again, maybe he will be a future star in his own right, but right now, we’re focusing on the now. I still feel like I have things to prove to myself, and I’m just going to go out and do what I have to do.

“Lately, Atlanta has been growing as another city for boxing. It’s great to just not be in a ‘bubble.’ It’s great to actually have fans in attendance for a change. The fans do play a huge part, especially in these big fights. Sometimes you need that crowd to push you and get you riled up. I believe Atlanta will have that great atmosphere that both of us will feed upon on Oct. 23.

“We both have something to prove in our own rights. He’s young, and he wants to be a two-division champion, which I respect. I feel like I’ve always been counted out. I’m still just fighting for my respect. That’s what keeps me motivated and hungry. I think this fight will bring out the best in both of us.”

Stevenson, 24, didn’t see it that way. He’s coming off a stale performance in June against Jeremiah Nakathila, in which he won by 12-round unanimous decision. He won the vacant WBO featherweight title with a victory over Joet Gonzalez in October 2019.

The undercard — streaming live and exclusively on ESPN+ — will see the return of Olympian Troy Isley (2-0, 1 KO) in a six-rounder at middleweight, Georgia native Haven Brady Jr. (3-0, 3 KOs) in a four-round featherweight tilt, and the A-Town debut of junior middleweight prospect Evan “Yung Holy” Holyfield (7-0, 5 KOs), an Atlanta native and the son of heavyweight legend Evander Holyfield.